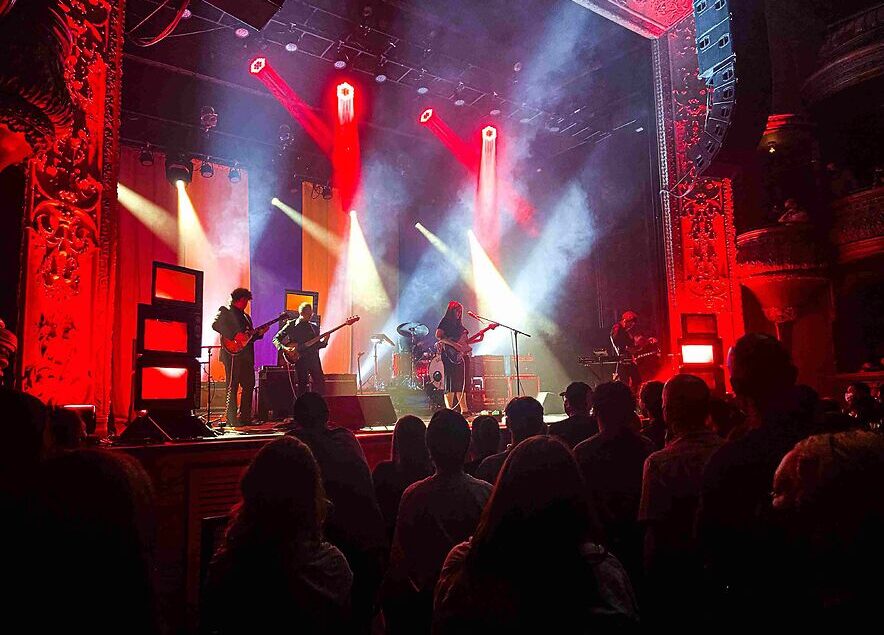 “It’s like basically October, which means Halloween is approaching,” said Sophie Allison, better known by her stage name, Soccer Mommy. Before launching into “lucy,” she continued, “I’d like to start a little early and get spooky.”

But there was nothing scary about Soccer Mommy’s set on Wednesday — a rather short, straight-forward show at a half-filled Thalia Hall. With the audience fully vaxxed and masked — except when sipping on Tecate and Moscow Mules — the concert felt like a soft return to live music in these Weird Times.

Allison, backed by two guitarists, a bassist and a drummer, opened the show exactly as she does her 2020 album color theory — with “bloodstream,” “circle the drain” and “royal screw up” — before wading into the dream-poppy “Last Girl” and oldie-but-goodie “Henry.”

The second half of the show slowed down quite a bit, starting with color theory closer “gray light.” The rhythm section bowed out for “night swimming,” and then Allison played a couple songs solo — “Still Clean” and a cover of Slowdive’s 1993 song “Dagger,” which Allison called one of her “personal favorites.”

“Hopefully I don’t just ruin it for them,” she added. But she didn’t.

Allison’s guitar tone matched the sound of color theory to a tee, and her delicate vocals on “night swimming” and “Still Clean” delightfully echoed throughout the concert hall. While Allison isn’t one to stage dive and crowd surf, she interacted with the audience in a casual, conversational manner, dishing out heartfelt “thank yous” to the crowd’s various “woos” and “i love yous.”

Notably absent from the setlist were Soccer Mommy’s four most recent singles, “rom com 2021,” “rom com 2004,” “Kissing In The Rain” and her breezy, lap steel-lined cover of the country tune “Wide Open Spaces,” which promised an exciting new direction for Allison.

Allison wrapped up the set with “yellow is the color of her eyes,” the seven-minute long centerpiece of color theory. While a steady drumbeat moves the song along, the core of the song is Allison’s eerie, reverb-drenched guitar riff. Unfortunately, the song’s soundscape was buried under thundering percussion, which also nearly drowned out Allison’s vocals.

During the encore, which also included the fan-favorite “Scorpio Rising,” there was a little left to be desired in Soccer Mommy’s biggest hit, “Your Dog.” When you have an opening lyric as good as, “I don’t wanna be your fucking dog,” you gotta own it.