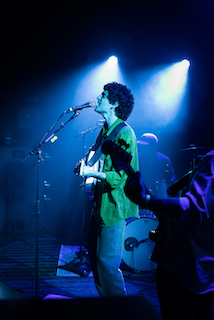 Lincoln Hall is one of the most intimate venues in Chicago. The max capacity of 507 and a stage only about four feet off the ground lets the crowd stand pressed up right in front. This was a fitting setting for the reflective, conversational, and personal performances by opener Field Medic and headliner Adam Melchor, both artists in the indie-folk-pop genre.

Field Medic, AKA Kevin Patrick Sullivan, built his opening set on the stripped and simple instrumentation of his guitar and harmonica. From his most popular folky love song, “uuu,” to his 40-second TikTok sensation, “song i made up to stop myself from having a panic attack just now,” his performance was captivating as he emitted an aura of emotionality and nostalgia. He built a rapport with the audience, taking a pause between each song to talk and crack jokes. The audience laughed with him while he tuned his guitar or switched out his backing tracks all held on cassette tapes. The twang of his guitar and the crooning harmonica created an ambiance that somehow felt simultaneously like catching up with an old friend and sobbing over a lost love connection.

Adam Melchor took the stage soon after, opening to a crowd of cheers. Originally from New Jersey and with a degree in opera from Montclair State University, singer-songwriter Melchor has built a discography of indie-folk and pop, centered around themes of love, loneliness, and longing. He opened with “Last Time,” an acoustic song about fearing a special goodbye. A personal favorite, this track is from his latest album titled Melchor Lullaby Hotline Vol. 1, which started as a way to connect to fans and test out songs during the pandemic. He also debuted some new songs like “Let Me Know When,” which was not only really really sad in my opinion, but according to Melchor’s recounting of a dinner party, also called really really sad by Charlie Puth. Melchor’s detailed background stories from meeting Charlie Puth to the song dedicated to his sister made the performance all the more emotional as an audience member whether I was singing along to a catchy chorus or taking in the delicate guitar strums.

Amidst his acoustic songs were more rock-filled tracks like “What A Damn Shame.” Bassist Matt Olsson and drummer Mano Ruiz were able to show equal energy and enthusiasm to Melchor, who was on his first headline tour. He made full use of his strong vocal range and ability to belt throughout the set while also incorporating a second microphone in some songs for a cool digital-choral effect. “Light Year” burst in near the end of the set with a flood of warm sunset-toned lights and a twinkling disco ball, truly capturing the feel-good serenade jam as the crowd swayed to the beat.

Adam Melchor’s musical arsenal holds a range of indie-pop tunes from acoustic to upbeat and from melancholy to childish recklessness. Each song is not only clearly personal, but full of pure and relatable emotions that listeners hold dear.