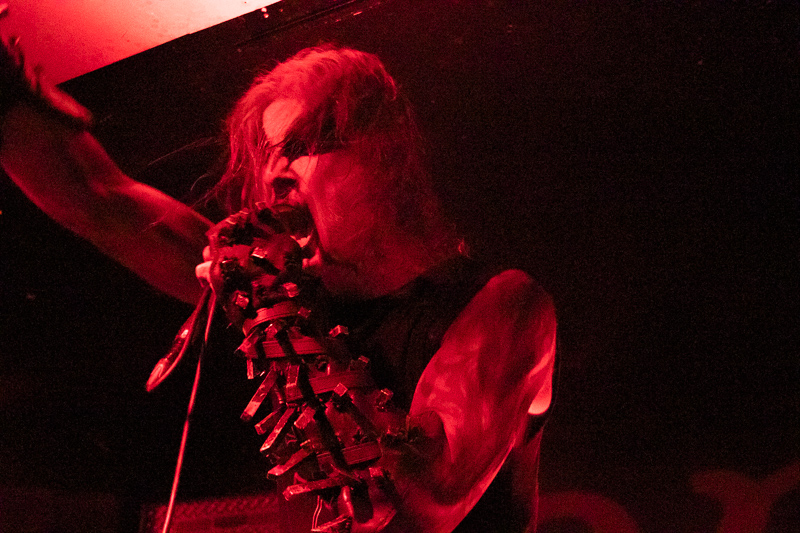 I’ve attended dozens upon dozens of concerts throughout my lifetime ranging from death metal to EDM to indie folk, and I have considered myself a music journalism for the last two years or so. Only a marked few times have I experienced a show that was truly life changing. This was one of those shows.

Let me just stress this: 1349’s November 2nd Chicago show at Cobra Lounge was without a doubt one of the best concerts I have ever witnessed. I don’t say that lightly as probably a good half of my reviews have contained some pretty harsh criticism, but the impeccable lineup, the technical proficiency and passion of the musicians, the utterly bone-chilling atmosphere, and the sold out rock venue filled with only the most devoted fans culminated in an unforgettable black metal-filled ritual.

With a short but brutal set, Pulchra Morte opened the evening. It seems preposterous to call them the “lightest” band of the night, but the death and doom metal outfit did an incredible job warming up the crowd for the soon to play black metal kings.

Cobra Lounge had already begun to bulge with patrons in distinctive battle jackets. A few of the audience members sported characteristically black metal corpse paint on their faces, and most of the men, so almost everyone, wore their long hair proudly unkempt. While the attire was certainly not an unusual sight at a metal show, there was a unique sort of intensity and devotion among these fans that usually doesn’t manifest.

My take: black metal’s particular brand of extremism, rebellion, and “taboo-ness” that stems from its Satanic themes and incredibly technical and fast-paced music garners bands in the genre a sometimes cult-like fan base. And when the first black metal group, Cloak, took the stage next, it was impossible not to become absorbed in the manic energy of the moment.

Drummer Matt Morris’ emotional and violent outpouring on drums blasted behind singer Scott Taysom’s throaty vocals and guitarist Max Brigham’s solos as they whirled their bodies across the tiny stage.

Perhaps I’m biased since this was my first black metal concert, but the vocals of every singer that night existed on an entirely different level than other metal singers I’ve reviewed. I’ll put it this way: it was if I had been listening to a pretty good college a capella group, but now that I had heard professionally trained Opera singers I couldn’t get the sound out of my head.

Now at this point, I had been thoroughly enjoying myself, but when Uada began their set I achieved a state I can only describe as the feeling you get when you visit Disney World for the first time… but a Satanist metalhead’s version of Disney World.

Four shadowy figures cloaked in black and obscured by smoke blended in with the foggy darkness. Bewitching intro music played through the speakers for an unnervingly long time before floodlights illuminated the fog and the band launched into a ferociously fast song.

Uada famously wore their face-obscuring hoods that they argue focus on the music and its power rather than the individual. This, along with the devilish vocals and atmosphere created an utterly enchanting set.

I could write pages just about Uada’s performance, my theories, and their mesmerizing effect on everyone in that room, but that wouldn’t leave me any space to hype the equally impressive headliner, 1349.

Hailing all the way from Norway, 1349 is an original black metal titan. Not as well known as Gorgoroth or Mayhem, but in my opinion just as incredible, the band represented the heart of that community when they walked on stage with intricate corpse paint, spiked arm bracers, and dark red lighting encasing them in shadow.

Ravn, as the lead singer calls himself, grits his teeth menacingly and shakes his fist into the air along with the songs, while drummer Frost literally disappears into darkness behind his drum kit. With 1349 playing now, the crowd squeezes together with a handful of folks straining to see from the entry doorway in the back. Moshers slam into the front lines with stage divers taking the leap once or twice.

Satanism, blast beats, sweaty 30-something men who probably haven’t bathed in a few days, and growling, harsh vocals certainly aren’t for everyone, nor do I think this genre would hold the same power if it was for everyone. But most people who really appreciate any kind of music can also appreciate when artists give 100% and are genuinely incredible at what they do.