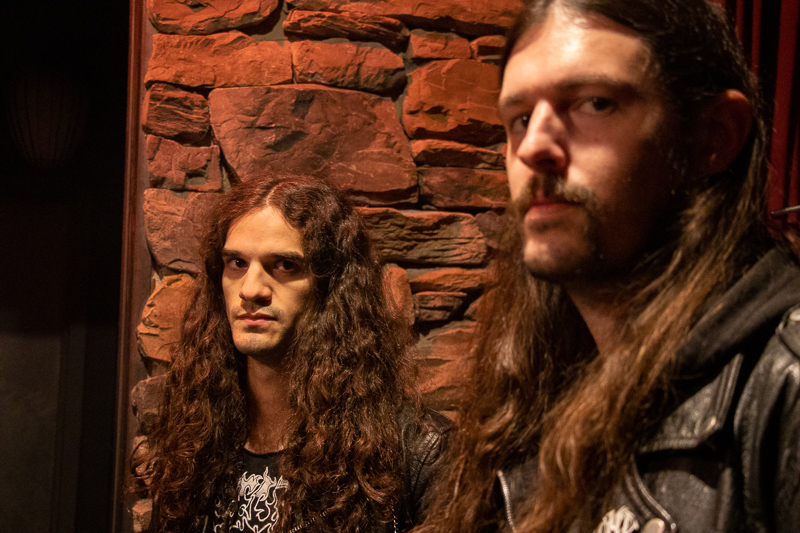 “You don’t need birth control—you’re in a black metal band.” One of the best moments with Atlanta-based four-piece Cloak comes not during my interview with them but directly afterwards. In a humorous moment backstage, the band’s touring drummer Matt Morris swallows an unidentifiable pill and jokes that he’s “taking [his] birth control,” prompting singer and guitarist Scott Taysom to imply that black metal musicians ‘can’t get any.’

Sure, black metal might get a bad rap in some circles for its Satanist leanings and extreme live performances (think severed animal heads and pig’s blood), but tonight’s Chicago show at Cobra Lounge is sold out with barely any breathing room in the smoky, dim-lit venue. And despite not having quite as much clout as Norwegian headliner 1349, the crowd still head bangs and moshes with enthusiasm during Cloak’s set (for more details about the show, check out my review).

“Every show has been so packed that we can’t walk through the venue at the end of the night,” Taysom says. And in the hour before the doors open, I watch as dozens of hopeful fans looking for last minute tickets get turned away. New addition and bassist Billy Robinson says, “Every tour that we’ve done, we’ve seen more and more of our fans come out, which is really encouraging. So that’s always really cool when you can actually see results from all the touring and all the work we’ve put in.”

For the Atlanta outfit that came together only six or so years ago in a rather niche genre, the turnout is more than impressive. Audience members approach guitarist Max Brigham outside the lounge after the show to express their appreciation. The group has already gotten a chance to play with black metal heavyweight Mayhem, not to mention they’ve been featured in big name rock magazines like Revolver and Decibel.

Cloak’s popularity could have something to do with their genre bending. Black metal first and rock ‘n’ roll second, the band’s style culminates in an enthralling blend of dark, pagan-themed lyrics with sweeping, rock-style guitar riffs and a more melodic sound. As Taysom eloquently puts it, Cloak has “the spine of a rock ‘n’ roll band with the spirit of a black metal band.”

Those well-versed in the metal world have probably heard the term “black ‘n’ roll” used to describe this brand of black metal touted by groups like Cloak, Venom, Kvelertak, and others. But the colloquial phrase doesn’t mean it’s a real genre, and Taysom and Robinson prefer not to label themselves as such. “I get where they’re coming from, but I don’t really know what that term means,” Taysom says. “The goal is to bring that rock ‘n’ roll energy into the black metal genre. Black metal is based in that spiritual mindset and Cloak is a very spiritual band lyrically.”

While Cloak opens for 1349 and Uada on their current tour, they have even bigger plans for the future. Next year they play in Europe for the first time with Batushka, and Taysom says he hopes they will get to headline soon and promote their new album The Burning Dawn. Black metal fan or no, Cloak’s music is definitely worth a listen, and I have to echo almost everyone else who’s written about them, but this is one band that is most definitely on their way to success.