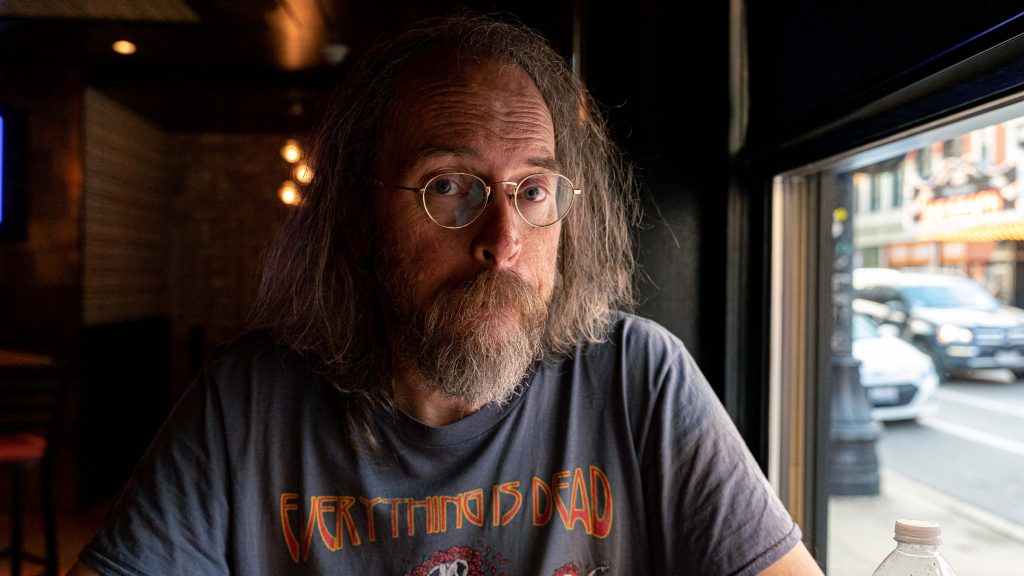 Charlie Parr, the Duluth-based folk-blues crooner, kicked off yet another tour here in Chicago this past Thursday night at Lincoln Hall. He’s accompanied on this tour by his friend Phil Cook. I’ve been a fan of Charlie’s since I first stumbled across his work in 2016, when Stumpjumper— an album I still play on repeat at least twice a week– popped up on my Spotify. Nervous and excited, I arrived at the venue early and took a seat by the window. After a few minutes of waiting around, a bewhiskered Charlie humbly ambled out to meet me, having just finished sound check.

The following is a transcription of our brief conversation, slightly condensed for length.

I wanted to ask you a bit about your songwriting process…  An older Citypages interview said that you write from the perspective of 1931 in a lot of your songs, drawing from old blues acts. Is that true?

Yeah well, not all the time… There were certain songs written using stories my dad told me as starting off points. He was born in ’22. During the depression he was a teenager, and he left home and bummed around the country for a long time and had a lot of good stories about that… I didn’t write any songs at all until he died. I think the main reason I even started writing songs is because I was having a really hard time figuring out how to grieve for him, because we were really close. So, I wrote down a lot of things that turned into songs that were inspired by all those stories he told me about the depression and hopping freight trains and all those crazy things he did… I guess I still go back to that occasionally, but it’s not so much the time, but the grief. I’m motivated more by that than anything else.

I noticed that some songs appear multiple times across different records in your discography… Does the meaning of the songs change for you over time?

For sure. Songs are never done… For me anyway. I mean, this is personal, but songs are never really finished. You know, if you’re a writer or a painter, you create your art and you give it away or sell it, and it’s theirs. They can do whatever they want with it. You can’t break into their house and edit it. But as a musician, every night I get to recreate the art that I made again—brand new. Because I haven’t made anything at all. When I play, nothing is created. You’re just moving air molecules around. And when you’re done, the air molecules will move back to where they were when you started. There’s really nothing there. It’s the most Buddhist form of art there is. So, songs get kind of rewritten every night, in a way. Certain songs that never felt finished in the first place keep piquing my interest until I re-record them, because they don’t feel the same anymore. Like you said, they’ve taken on a new meaning for me.

I read somewhere that you play up to 250 shows a year?

I have—I’ve played up to 275 shows a year, but I don’t have a job, so I got nothing else to do. This past year I did way lower than that. I broke my shoulder this past August, so I was off the road for like two months. But I play as much as I can. If somebody asks me to play, then I’ll play, because all I want to do is play the guitar.

You also have a family– two teen children– how has that impacted your musicianship and touring, et. cetera?

Umm, not well. Or maybe it’s the other way around. You know, this lifestyle destroyed my marriage. The challenge of being a parent and living this lifestyle is daunting. I’ve tried to make it okay by the time that I am home, trying to be mindful and present—awake—for my kids.  They’re in their teens, so sometimes they don’t really want me to be there, but you know, if they do want me, and I’m in the house, I want to be there and say yes to them and what they need. When I was a kid, my dad worked in the packing house. He was a great guy, but he worked 12 hours, sometimes 14 hours a day; when he came home he was tired. His body was there, but the rest of him was not… I’m gone for a couple of weeks, so when I am with my kids I make it my duty to say yes to them and spend time with them, and just do what I can.

So, we mentioned your shoulder earlier, I’ve read you were also diagnosed with focal dystonia…

Yeah, that was years ago.

How has that made an appearance in your work?

Well, what happens is your rhythm goes away… You feel like you don’t have a hand anymore—you have a flipper. It’s really hard to deal with. When I got the hang of it and started changing the way I play the guitar, the way I hold it, the way I attack it, then it seemed fine again. And it’s plateaued at that spot for 7 or 8 years now. So, I’m comfortable now. There’s still a lot of stuff that I physically cannot do, because these fingers are not usable anymore… I can only play with my index finger and my thumb, and for a finger-style player, that’s not really enough. But I took a lot of comfort in the fact that a lot of amazing guitar players like Reverend Gary Davis and Booker White and Doc Watson pick with two fingers, so I could look to them for inspiration.

And you play a lot of slide was well.

Do you mess with different tunings often?

All the time, yeah. I love alternate tunings. I don’t use a lot of them in performance, you know. There’s some that seem really specific to like one or two things and it takes a minute to get there. Some are a strain on certain strings and you’re always afraid you’re gonna break something on stage, so during a performance I might use two or three different tunings, but rarely more than that. At home when I’m practicing, I’m really interested in exploring a lot of different tunings, so I have a few guitars that just hang around the house and are tuned odd, so I can play around with those.

You alternate between a resonator and a guitar at times.

Normally. My twelve string is kind of in rough shape, so I’ve got two resonators tonight set to different tunings.

There’s some harmonica in some of your recordings, do you ever break that out on stage?

Well, that’s a friend of mine that plays that. And he’s a freight train engineer, so he doesn’t travel unless he’s got time off. I’m trying to talk him into retiring, because railroad pension’s pretty good. You could just hit the road and play music.

Yeah, that’d be nice! Another question: I saw online that you had a pdf, sort of minibook format of some of your writings, and song lyrics, and what have you. What inspired that idea?

That was my friend Ryan, who does the website. I don’t have a computer so it’s hard for me to figure that stuff out. He’s like an archivist, librarian. Really good at it. So, he wants me to send him lyrics, so he could put them online. Well I don’t have a computer, so I mailed him some notebooks and he scanned the notebooks and sort of put them all together that way. And then I just started sending him everything, and he started compiling it, scanning it, putting it on the website. 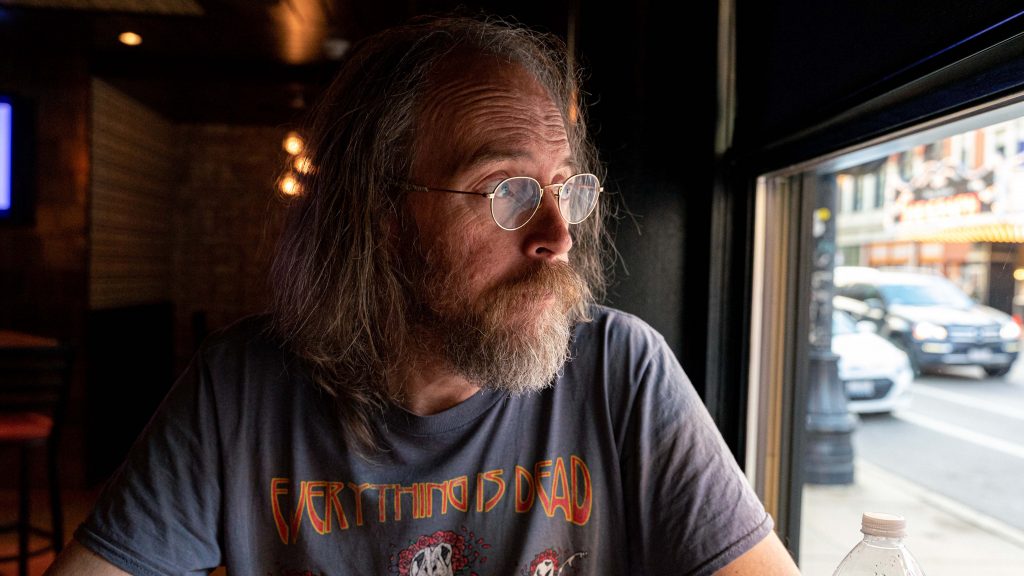 Do you do any illustrating?

You know I do, I do painting, watercolor painting, but it’s terrible. [Laughs] It’s a mental health therapy so I don’t show those around too much.

I know depression has been a constant theme for you, and it’s evident in a lot of your songwriting, but can you talk about what that’s been like for you, if you’re comfortable?

Yeah, I’m getting comfortable with it. There’s been too much of my life where I wouldn’t talk about it because I was ashamed of it. When I was 14 through 16 I had several suicide attempts. I was in and out of the state hospital around where I lived, umm, and then for a while it kind of subsided. You know, depression’s weird. For me, anyway, depression manifests itself in this situation where you don’t feel much of anything. You know, your motivation goes away completely, you don’t feel particularly sad, you never feel particularly happy, you know you just don’t feel much of anything. And it’s dangerous. When I was in my late 40s, and I’m 52 now, it came back with a vengeance. I had a few more suicide attempts and decided to actively start seeking some sort of therapy for it, and it’s been going well. So that’s what I do. I play music and I practice kind of a walking meditation daily, that helps me a lot. But it’s there, and it’s powerful.

Your work, at least the way I see it, has a way of reaching out to people in similar situations, feeling similar things.  You’re a walking example of overcoming it in a sense.

That would be an honor. That’s hard sometimes. It doesn’t feel like I’m overcoming it. It’s such a present part of my life, you know. Depression comes along with a weird kind of social anxiety I have that sends me running to the most private place I can find. I wanna just get away. It’s weird, playing shows, and you’re in public, and people are around, sometimes a lot of people, and you have to find a way to deal with that. And I always appreciate when someone comes up and says, “I have it, I’m suffering as well.” And it’s not something where I can say I’m doing great, but at least you know you’re not alone.  There’s more of us out there when you think. There was a time when I was a kid, a teenager, when you didn’t say anything to anybody because there was such a stigma around it. People called you terrible names. Think about a 14-year-old kid who takes a bottle of pills because he’s done living, and he goes back to school, and people make fun of him for it. It’s freaking terrifying. Anything I feel like I can do—I can’t help anybody, because I haven’t found a way out of it myself—but if I can say you know I’m here too… Sometimes that’s good. But that’s all I’ve been able to do so far.

On a lighter note, are you working on any new projects?

Yeah, Red House [Records] is putting out the next record in August, which is more of a solo record. It’s actually a little bit of a retrospective. I wrote some new songs, I covered a couple of songs I’ve wanted to cover for a long time: a Spider John Koerner song and a Grant Hard song. And then, like we were talking about earlier, I revisited a couple of old songs that I feel like I really wanted to get another run at, because they’ve been around for so long and they’ve changed over the years. The meaning has shifted for me, so I wanted to take another crack at it. So that’s going to come out at the end of summer. And I’m always writing a lot for the next thing, but nothing’s really coalesced yet.

Alright, well we look forward to hearing it! Thanks Charlie.

Thank you, Finn, I appreciate it.