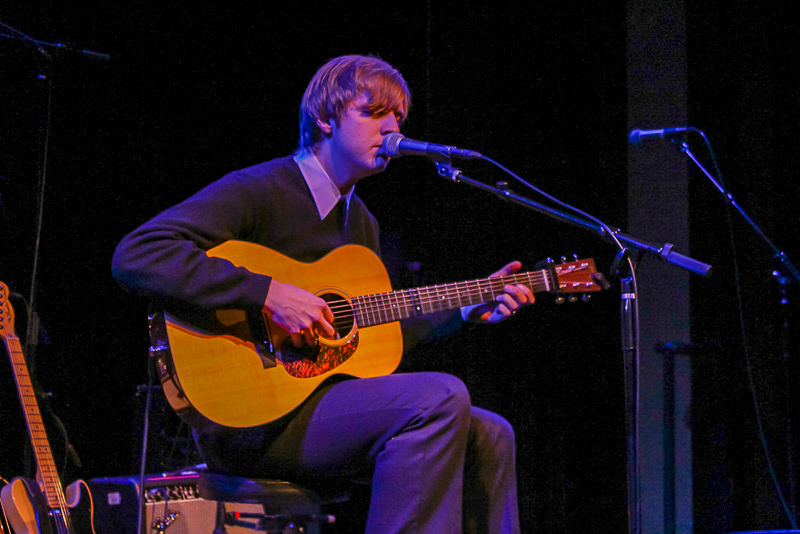 Opening for Julia Jacklin, Hutson delivered an acoustic set at the Gary and Laura Maurer Concert Hall at the Old Town School of Folk Music on Friday, Nov. 15.

Getting the “hard one” out of the way so he didn’t have to worry about playing it later, Hutson began with a breathtaking guitar-driven ballad featuring Springsteen-esque storytelling. Hutson’s left hand glided effortlessly across the neck of his guitar, echoing the vocal melody on its steel strings.

Between songs, Hutson fielded questions from the audience. Accepting suggestions for cover songs, Hutson jokingly started to play a serious rendition of a Sum 41 tune before bursting into laughter. He also noted that the first song he learned to play on guitar was Nirvana’s “Smells Like Teen Spirit.”

Throughout his set, Hutson played the somber “Seven Lakes” and the breakup ballad “I Just Can’t Fucking Do It Anymore.” He showcased his upper vocal register on the Tom Petty-like “I Have to Keep You Down,” in which he belts out the song’s title in a nasal twang.

Midway through the set, Hutson invited some friends, including Jacklin, on stage for a full-band rendition of the unreleased “Let’s Get The Old Band Back Together Again.” Filled with nerdy nostalgia reminiscent of Weezer’s “Back To The Shack,” the song also paints old bandmates reuniting (“Let’s get back in the room and let the magic happen”). Huston called the on-stage supergroup Deep Heat, a band formed while on tour.

Earlier this year, Hutson performed the song with Phoebe Bridgers while touring with Better Oblivion Community Center (her project with Conor Oberst). Hutson opened for BOCC on their recent summer tour as well as played in the band as a touring member. Hutson has collaborated with Phoebe Bridgers in the past, co-writing songs for BOCC and boygenius, her project with Lucy Dacus and Julien Baker.

The peak of Hutson’s set was his closer, the recently released single “Northsiders.” The song’s verses are gentle and hopeful, reflecting on Hutson’s adolescence and old friendships. He blends witty one-liners (“Said that we were communists/ And thought that we invented it/ Morrissey apologists/ Amateur psychologists”) with beautifully crafted narratives (“I read an article about the accident/ Probably reaching for cigarettes/ And missed the brake lights up ahead/ I hope it was an instant death”). Alone on stage, Hutson’s words weighed heavy over the innocent blissfulness of his acoustic guitar.

Hutson briefly spoke with WNUR after his set to discuss touring and his upcoming album.

How does this tour with Julia compare to other tours you’ve done recently?

Julia’s fans are really quiet, and so are Phoebe’s and Conor [Oberst]’s. That is rare, because I’ve done tours in the past where people are talking a lot.

Who are some of your biggest influences?

I listen to a lot of quiet acoustic music, but also just really good songs. It doesn’t matter how they’re produced or what they sound like. I learned how to play guitar from listening to Elliot Smith and John Prine and people like that.

Is it true that Phoebe Bridgers is producing your upcoming album?

Awesome. What can we expect to hear?

It sounds like the single (“Northsiders”), but there are other cool things on it too. There’s drums on a couple songs. We did a few songs live tonight like we did on the record.

Do you have a release date?

No, not yet. But next year.

What else are you doing in Chicago while you’re here?

Unfortunately nothing. I’m gonna be in this venue and then we leave, and then we’re gonna drive an hour and a half to Minneapolis.