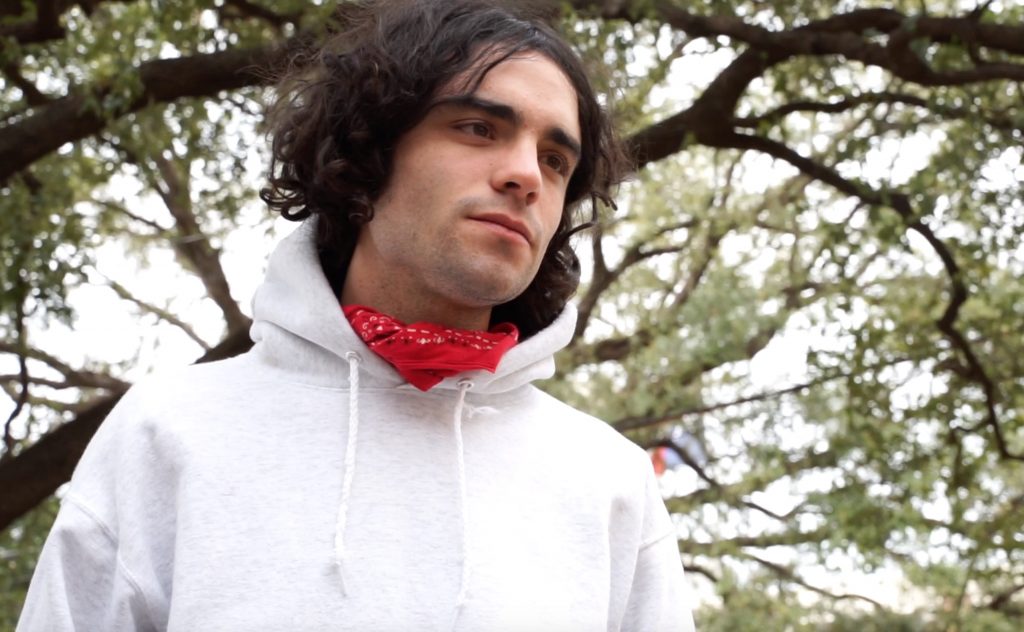 WNUR caught up with S. Holden Jaffe of Del Water Gap at SXSW 2019. Watch (and read) to find out the significance of hiding behind a project name, why he has a burner phone and what to expect from upcoming album, Don’t Get Dark.

Ellise Shafer: What was the genesis of Del Water Gap?

Holden Jaffe: I went to a sporty high school and I was bad at sports, so I decided to make a record. I spent some time converting a storage closet there into a recording studio and ended up making my first record there. At the time, I was listening to a lot of indie artists that were solo artists but they had project names like St. Vincent and Bon Iver, so I decided to hide behind a project name myself and what I came up with was Del Water Gap. I ended up putting out that music and moving to New York for school, where a few people convinced me to actually pursue it and play some shows, and the rest is history.

ES: What made you want to hide behind a project name?

HJ: I don’t know, fear? I also think that having a project name does allow a little more freedom creatively to sort of make that project publicly what you want it to be. It was a band for a number of years which was helpful for me. I really thrived being in a group, it just allowed me to lean on people and be creative with people in a way that I wouldn’t have been able to do if it was just myself.

ES: But now it’s back to just you?

HJ: Yeah, so the last couple of years the people I was working with moved on to do other things. I’m still doing it, so it’s just me now, but it’s been good.

ES: How do you go about writing music and recording the songs as a solo project? Do you play the instruments or do you have a full band?

HJ: It’s a mixture. I’m surrounded by a really good community in New York City, a lot of really talented people. So effectively, I make demos and then I get some of my friends to help come make the record.

ES: Are you playing with a full band here?

HJ: No, I did one duo show with me and my guitar player, and then I’m doing a solo show tomorrow.

ES: Was your inspiration for the name the Delaware Water Gap? Why? What is its significance to you?

HJ: I was in a band, a sort of noise rock band based in Morristown, New Jersey and so I was going there a lot on weekends to rehearse, and it was by the Del Water Gap. I saw the name floating around and I liked the way it looked, so I added it to my growing list of band names and it just ended up being the best one. And yeah, I think it’s aged decently. It’s hard to Google but I still like it and think it suits me.

ES: 2017’s EP is titled with a phone number. Is that an actual number? What is the significance behind titling it that?

HJ: Yeah, it’s a sort of drug dealer burner phone, like a flip phone that’s on my desk in my bedroom.

ES: Do you get a lot of calls?

HJ: I get a lot of calls, yeah. I used to pick up and I used to text back but it just got to be too much. And then it got really weird, I got some really stoned people on Spotify. But yeah it’s cool, it was sort of a project to experiment in access. I had this moment when I was trying to name the EP and I lost my iPhone and I realized that I didn’t know anyone’s phone numbers, and I think that’s something that we’ve lost in the age of having cellphones. I feel like there’s sort of this intimate piece in knowing someone’s phone number, and I realized I only knew my parents’ house phone. My girlfriend at the time, I didn’t know her number, and I didn’t know my parents’ cell numbers or any of my best friends’ numbers. It sort of felt like a nostalgic move and a way to give people direct access to me and yeah, it’s been really interesting.

ES: Your new single, “Chastain,” begins with the lyrics “Man, I just wanna live a day as a blonde/I’ll look like Jessica Chastain.” How did this lyric come to be? Also isn’t she a redhead?

HJ: Well, it’s a joke. The whole song is kind of tongue-in-cheek because I think the character of the song is like a bummy guy who just hangs out in his house. My mom is a brunette, but she dyed her hair blonde a few years ago and she always makes jokes about how, you know, “blondes have more fun.” I was thinking about that and this character wanting to be a blonde, but not being with it enough in pop culture to know that Jessica Chastain isn’t a blonde and sort of being confused and grasping at straws to contextualize this for himself. It was a good way to establish his personality.

ES: Do you often have characters in your songs or do you mostly write from your perspective?

HJ: No, I don’t often. I’ve written a lot about myself and my feelings, and a lot of it has been pretty romantic-based and nostalgia-based, and more recently I’ve been challenging myself to write more; to write narrative songs that aren’t necessarily about my life. This was the first song of that new era of writing. I’m new to it.

ES: “High Tops” is a beautiful and heartbreaking song. I first discovered it on my Spotify Discover Weekly and it became a staple song in my playlists for at least a few months. Can you talk a little bit about the inspiration behind that song?

HJ: I had a very short relationship with someone who kind of came in and out of my life at a very vulnerable time. I wrote that song really quickly, it was sort of a “for me” song, like I wasn’t really planning on sharing it with anyone because it felt very personal. But then I brought it to my friend Michael to try to finish it and he really pushed me to put it out myself. For years, for months, I was scared to play it live because I say this person’s name in the song and so it was very personal. But yeah, it’s come to really have some legs and I’m really proud of it. It represents a memorable time in my life and so it’s special for me.

ES: It has over 2 million streams on Spotify. Did you have any idea/feeling it would get so big? Has that changed anything for you?

HJ: It happened really slowly, that song finding a place, and pretty organically. I think there’s two parts of being a music creator – one is you make music for yourself, and the other part is you make music to connect with people or you make music to have a career and make money. And this was the first time that second thing was really shown to me, like a lot of people really reaching out to me and having personal anecdotes about this song. It made the project feel like it wasn’t just about me anymore which was really nice. You know, I think imposter syndrome is a big part of this type of career. If you’re not super busy all the time you can start feeling like this is your journal or your diary, and you’re sort of just making noise to make it. And I think that song was part of a transition into me actually feeling like there’s more people involved.

ES: A new album is coming soon from Del Water Gap. What can fans expect from it? How will it be similar/different to past projects?

HJ: I think that it’s pretty similar vibe-wise but I think the record sounds better and I think the writing is a bit more mature. I think it’s my best work; I’m the most proud of it. It’s the first time I’m putting out a record where no one can tell me it’s bad, like I just won’t believe them if they tell me it’s bad. I really, really like it and I’m really proud of it. I think what’s similar is just the narrative voice and the arc. I think it’s still me as a writer. I think it’s a little more minimal than my old shit; I think it takes a little bit more confidence to be more minimal. I think in the past, I really leaned on having a thousand things going on to kind of distract people from myself.

ES: What message do you hope to send with your music, in regards to yourself and those who listen?

HJ: That’s a good question. I think for me, a lot of what I get out of writing is what a lot of people seem to get from spirituality or meditation practice. For me, it’s about dedication to the process. I really feel like I’m serving this thing that can serve me, so I try to write a lot and try to improve as a writer, and sort of being available and being open to that and willing to receive it and work on it allows the message or inspiration to be secondary. I feel like a lot of the time it’s more conformed by what’s going on at the time, what I’m listening to, what I’m reading, and that changes all the time, and the relationships I’m in or not in and the people I’m spending my time with. So I think that’s more passive, the first part of that question. The second part being the message I want other people to get from it – I think I want it to be up to them because I feel strongly as a creator that once you put something out into the world you give it away, and I think it’s not as much up to you anymore. Obviously, I want people to find comfort in it or love in it or fall in love to it or around it, and I think that’s the case for a lot of creators, but I think the minute details of that is up to whomever is consuming it.