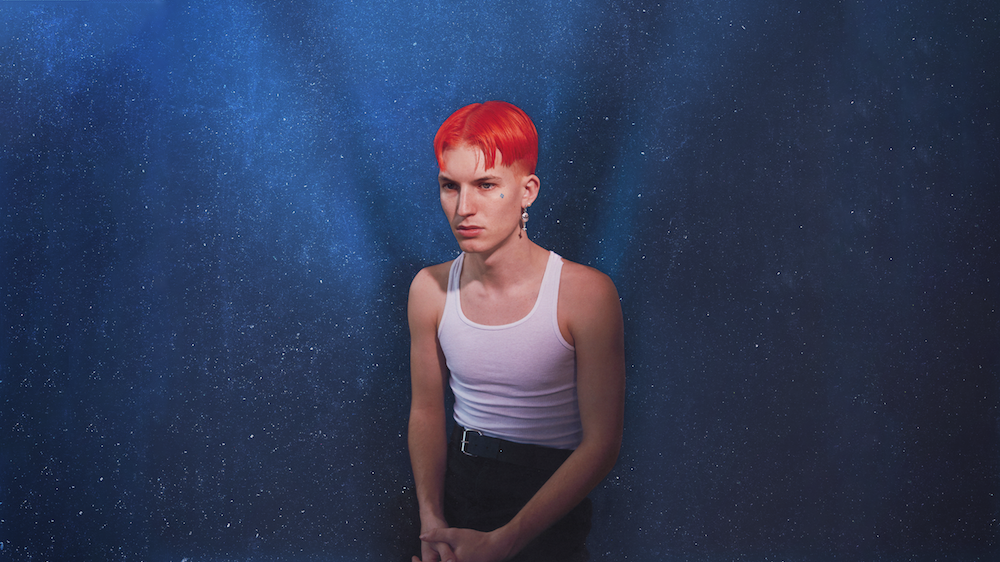 Brendan Rice is shirtless and (mostly) hairless when he appears on our Zoom call. Better known as his alter ego, Gus Dapperton, he usually rocks a neon-colored bowl cut and sparkly jewelry. Now, the bedroom popstar looks unmasked. He claims the new look is unintentional, but it matches the sound of the two new singles from his upcoming album Orca: stripped-back and vulnerable. Dapperton references his real name on the acoustic “First Aid” and grapples with death on the driving “Post Humorous.” In a chat with WNUR, the artist discussed virtual concerts, his influences and the ways in which Brendan and Gus “merge” on Orca, due September 18.

This conservation has been edited and condensed for clarity.

WNUR: What was it like making a record during quarantine?

I actually made the record before quarantine. It was more finishing mixing and mastering it, which is less creative and more technical work. So it wasn’t that difficult. Fortunately, I feel like the album’s sort of topical in terms of theme and the emotions behind it, so it feels good releasing it now. Someone’s gotta release music now, and I feel comfortable taking on the responsibility of doing it during quarantine. If I had to make an album and finish the actual writing during quarantine, I probably wouldn’t have even tried because I wouldn’t have been inspired, and I won’t try to force myself to be inspired if I’m not.

WNUR: You’re known for your iconic bowl cut, but you recently shaved off all your hair. How intentional is your personal aesthetic as it correlates with the music you’re releasing?

I really like to change my hair often. I feel good after I do something to my hair, and it gives me a new way of looking at myself. It’s not really intentional. I had my hair a certain way, and there was a video I wanted to be bald in recently, so I buzzed it bald. I don’t really know what I’m gonna do next; I might bleach it and do another color soon.

WNUR: While Where Polly People Go to Read is filled with bright dream pop synths, your two recent singles, “First Aid” and “Post Humorous,” heavily feature the acoustic guitar. Is this the sound we can expect on your upcoming record, and what inspired it?

I definitely like albums to have a cohesive sound, but I don’t try to lock myself into it. I listen to so much different music, I feel like I’d be lying to everyone if I tried to pretend like I only make one kind of music. So I try not to neglect any instruments or styles, and I wrote most of the record on tour and had an acoustic guitar always lying around. I really wanted to focus on songwriting and melodies and lyrics and chord progressions as opposed to the production. Usually the production is one of the driving factors of my music, and it’s like one of my bigger strengths. This time I really wanted to focus on, like, if there was no band and I just had to sing a song and play it on the guitar or the piano, how it would sound.

WNUR: And you studied music technology at Drexel, so unlike many artists, you know a lot about production.

Yeah, the first thing a lot of artists do is either singing or playing an instrument, but the first thing that I did in music was producing on GarageBand. And that’s what I did for the longest time, so what I’ve had to learn is playing instruments and singing.

WNUR: Did you have any specific influences for the upcoming album?

It was inspired by the lifestyle of 90s rock ‘n’ roll and alternative music in the early 2000s and being on tour with a live band. I wanted a lot of the stuff to sound live and not super cleaned up or produced.

On the whole record, I’m reflecting on my youth and what my first experiences of life and death were when I was a child versus what they are now, and how they’re directly correlated. When I was a kid, I had a lot of deaths in the extended family. The first experience I had with death was when I was three or four, going to my great grandma’s funeral and not understanding what was going on — the weight of death. [The record] also talks about when you’re an adult and going through depression and suicidal tendencies, and it relates to not treating death in a naive way on both sides of your life. It’s about someone who has lost control and is being self-destructive because they face no real consequences. They know there’s the support system around them that they can fall back on no matter what they do.

WNUR: Do you think that the songwriting on Orca explores deeper topics that you haven’t dived into yet on previous music?

Definitely. None of it’s about romantic love. It’s all about unconditional, platonic love and friendships and pain and life lessons, as opposed to my other stuff which is mostly about falling in love and having crushes and falling out of love and deceit.

WNUR: Gus Dapperton is a character that you created. In an interview with i-D, you said that it was “hard trying to be Brendan,” and that Gus represents your “true self slowly surfacing.” Is there more to Gus on Orca that we haven’t seen yet?

I kinda merge the two. I was thinking about how, when you’re young, you’re encouraged to do things that you’re good at. I was like 17 when I started singing, and obviously no one was gonna encourage me to sing because I had never sung before. And I didn’t have an amazing voice. It just sucks; I think everyone should start something new whenever they want to. There shouldn’t have to be a miraculous, God-given talent to be good at something and to practice it. So I was like, “Fuck it. I’m just gonna do what I want, and if anyone discourages me from trying, I’m just going to do it anyways.” That’s the half of me that expresses myself and then this other half of me doesn’t, so the two are merging into one.

WNUR: With touring shut down right now, what are your plans for the rollout of this album in terms of reaching fans? Are you a fan of the virtual concert format?

I’m not a fan of virtual concerts, but I am a fan of creative content. My plan is to take my time releasing Orca. I feel like music that’s released during this time is going to have a longer life expectancy because even if it takes us years from now to start playing these new songs live, I think they’re gonna have the same reaction as they would if I were to tour right now. People are going to be waiting for this chance to get back out and hear these songs, so I’m just gonna take my time and make as much creative stuff as I can. It’s been fun to create new ways of making the visuals and doing live performances. I’ve really liked doing these half-music-video-half-live-performances where I’m creating cool backdrops and scenarios where we play songs either more stripped-down or with a full band. But I don’t really like livestreaming because I still want to mix everything.

WNUR: Is there anything that you want people to know ahead of the release of Orca?

I like to let the music speak for itself, and I hope people can relate to it in whatever way they can. I don’t expect people to relate to it in the same way that I do. I think it’s cool for people to copy and paste their experiences and plug them into mine.