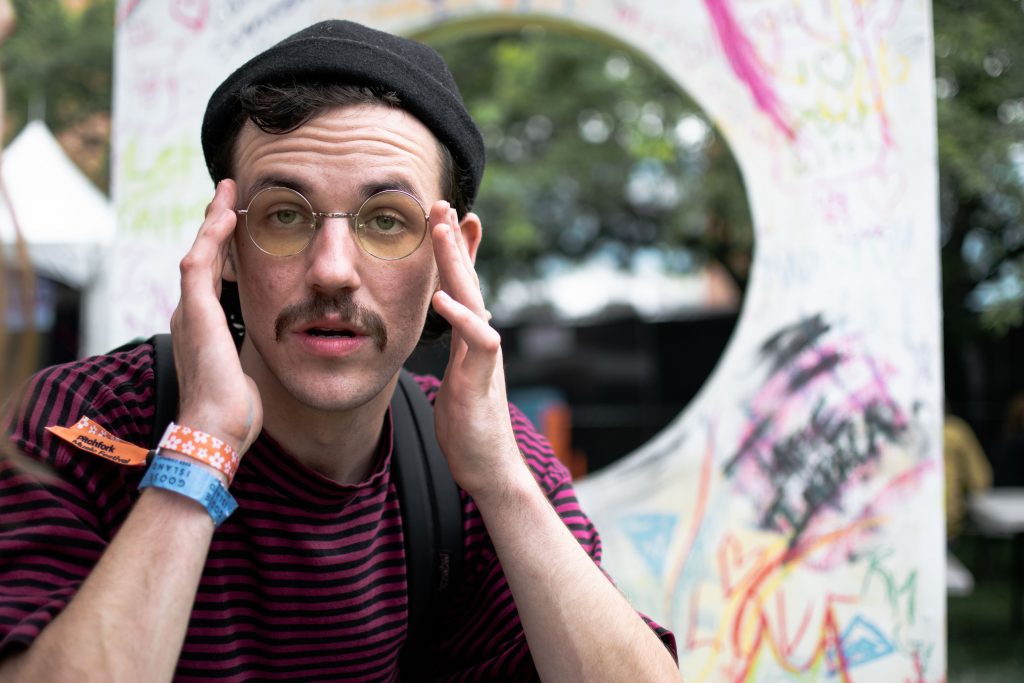 After he opened Saturday’s lineup at Pitchfork Fest, I got the chance to sit down with Paul Cherry (on a cool art installation). Here’s what the Chicago musician had to say about touring Europe, the Chitown music scene, and his upcoming collaborations.

ES: You just finished your set at the festival. How was the experience for you?

PC: It was very bizarre. I have been coming to this festival for like the 8 years I’ve lived here I think. I’ve come every year and I never ever thought in a million years that I would play this festival. Even just opening it up, it was so special. It felt so amazing. It was so surreal. I saw so many friends in the crowd. It was just so fucking cool.

ES: How did you prepare for the festival?

PC: Basically, I saw on the advance info that I could just put however many band members I wanted down. So I have rotating members – people that come in and out – and I just wanted all of them to be there, so I got as many of them on stage as I could. And my friend Kevin Krauter, whose got amazing music, hit me up and he was like “Can I play with you at Pitchfork?” and I was like, “That’s bold of you to ask, but hell yeah, come on.” So he did backup singing and it was really fun. We practiced all week long and I took the week off of work. I took it pretty easy last night and didn’t go to any after parties or anything because I had to play early and didn’t want to fuck up. But now it’s my time to party.

ES: How did you first get into music?

PC: Well I went to music school here, at Columbia College, for composition. I started taking guitar lessons when I was 10. It was never a question of what I was going to do with my life. I feel like I said when I was 10, “I like music. I want to do that,” and then my mom was like “Okay, you like music, we’ll do that now.” And then I went through guitar lessons and orchestra in middle school and high school, and then it was time for college and I was like, well I just want to keep doing music. So I did that. I think life is about just picking one thing and doing it, like it doesn’t really matter what the one thing is to a degree. When people can’t figure out what they wanna do, I’m like, just pick one thing and then do it for a while, and do it really hard, and see if you like it. So I just did the one thing for a really long time, and now at age 26, it’s starting to really pay off.

ES: How would you describe your sound?

PC: I would say it’s very happy music that sounds pretty drugged out. 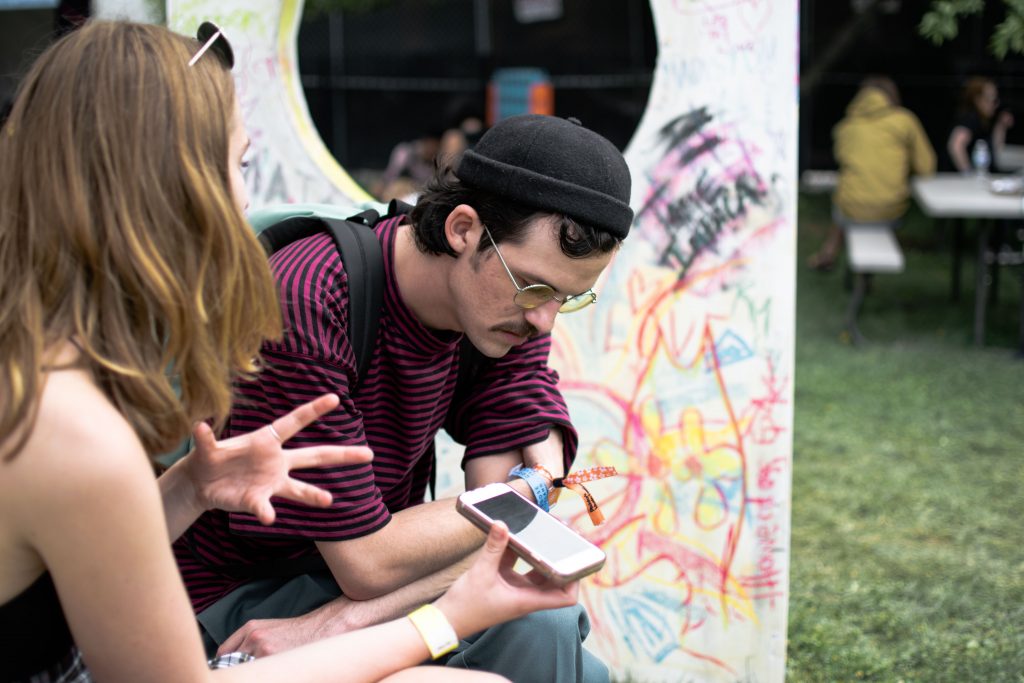 ES: Do you record your songs yourself? Do you subscribe to the whole “bedroom pop” craze that’s going on right now?

PC: I record all of my music myself. I do it with some friends too, but I’m the head engineer on all of my own things. And yeah, it is basically bedroom pop style. I recorded all of Flavour in my apartment with my friend Matt. We had this big, open space and recorded it all there.

ES: Who have been your biggest personal inspirations?

PC: I’d say Paul McCartney or Todd Rundgren. At this point, Mild High Club is probably my favorite band, and I’m getting more into house music right now, so I think the music I make for my next album is going to sound a lot different with some house influence, which is weird.

ES: You definitely shifted your sound between EP On Top and Flavour. What brought on this change and how did you execute it?

PC: Well that was a four year gap [in between projects], which is so long. And that first EP, it was weird that people liked it at all because I made it so hastily in my apartment in Bridgeport just for funsies, and then it got a lot of plays on Soundcloud. But then I thought, I wanna make good music. Like, I don’t wanna make hasty music, I wanna make extremely good music. It took me other four years to make Flavour. I recorded two albums that I scrapped and I took some of those songs and revamped them. It took me a while to feel like what I was doing was cool. And then seeing the response off of that, the wait was worth it I think because the response I have been getting has been really crazy. It’s really bizarre to watch.

ES: What does being a Chicago artist mean to you? How has being from and living in Chicago influenced your music, if at all?

PC: It means lots of homies that make music. It means every time I go out I know that I’m going to see X, Y, and Z and I know we’re gonna talk about A, B, and C. Being a Chicago musician means having an arsenal of people that are so overly joyed to work with you and overwhelmingly accepting of who you are, and just ready to help you. Like everyone’s ready to help each other and nobody wants anyone to fall. The Chicago scene is special for that because the bigger bands help out the smaller bands and it just feels like everyone’s lifting each other up and it’s really, really tight.

ES: You recently announced that you will be touring Europe in the Fall. What are you most excited about in regards to these shows?

PC: What I’m most excited for is that I’m going to some really weird countries, like Croatia, Serbia, and Hungary. It’s really, really weird that I’m playing there, but it’s so tight that I get to. I’m super stoked on that.

ES: Could you describe your songwriting process?

PC: Lots of times, it’s very long and drawn out and exacerbated, like just listening to something over and over and being like, “This isn’t good yet. I don’t know when it will be good either. Fuck.” I feel like a lot of the songwriting process I make torturous for myself. I don’t know why, I just make it really hard on myself. But watching the pay off has been worth it in the end.

ES: In your lyrics, you talk about millennial culture and dating in the age of the iPhone. What do you hope to communicate about this topic through your music?

PC: I think that is part of the cultural zeitgeist of today, actually, and I don’t feel like that message is unique to me. Like, listen to somebody like Clairo, it’s the same thing. I was even listening to Jojo the other day, that song “Too Little, Too Late,” and a lot of those lyrics are about being on your phone. So I don’t think that it’s very unique. One of my songs [“I See You”] is specifically about being on your phone and looking at someone who broke up with you and being like, “Damn.” And that’s a thing! You know, when you get broken up with, you can still look at their Instagram. So, I don’t know if my lyrics are going to continue to be about that, but that’s what they were at the time.

ES: Who are some of your favorite artists of the moment?

PC: Lala Lala is so tight. Post Animal is super tight. Kevin Krauter – really sick. Clairo, love her. All my friends. Divino Niño are coming out with a sick record.

ES: What’s next for you? Is there another album in the works?

PC: Yeah, I’m working on a new one right now. Kind of changing up the sound a bit. Sitting on an album for a while and then touring it, you get to meet a lot of people that you respect. And then when you notice that people are giving a shit about your music, you get more liberty to say “Yo, will you work with me on a track?” So now, I’ve been just like, who do I really like and who do I want to work with, and will they say yes? I’ve been going out on a limb and being like, “Can we work together? I’ll come to you!” So, I love the band Hoops and I’m recording some songs with those dudes, I’m recording a bunch of songs with this band Shy Boys in Kansas City, I’m gonna go out to New York and record with my friend Adam [Intrator] who’s in the band Triathalon, I’m gonna go to LA and work on a track with my friend Dent May. So I’m like doing this friend collab thing where I just get to say, “Yo, let’s hang out, let’s make songs,” and everyone’s just been like, “Yeah, that sounds sick.” Everyone’s just into the music. So it’s been exciting. Really freaking chill.

PC: So you guys are from Northwestern?

PC: Well, have me play Dillo Day or some shit!