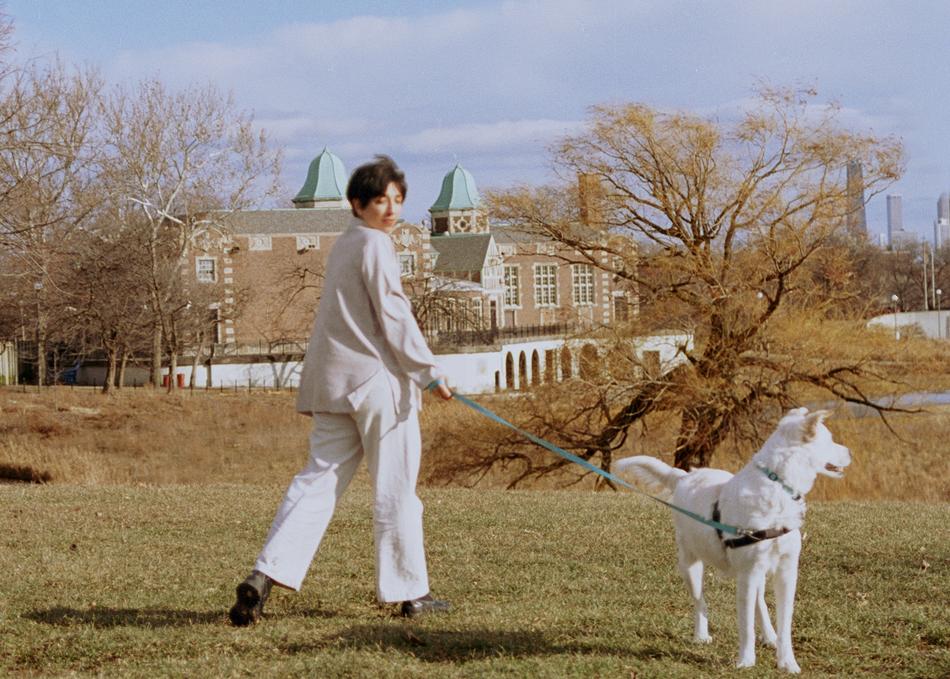 You might not guess that Tenci, the project of Chicagoan Jess Shoman, is from the city. Their debut LP, My Heart Is An Open Field, is filled with references to the outdoors: wind, a creek, snakes. And their music videos feature sprawling deserts and empty, winding roads. In “Joy,” we see friends riding in the back of a pickup truck, the wind sweeping through their hair. There’s a sense that they – and by proxy, Shoman – are unbound. Tenci originally released My Heart Is An Open Field last year under a small Chicago record label, Hobbies, that Shoman’s friend started. A few months later, indie label Keeled Scales approached Shoman, offering a bigger release for an album they thought deserved more traction. It was a dream scenario for Shoman, who had always wanted to put something out on vinyl. This June, Tenci re-released the album. My Heart Is An Open Field is simultaneously intimate and inviting. The folk-influenced songs’ instrumentation is relatively minimal, but Shoman’s voice lends them richness. It is at turns breathy and full. One moment Shoman is humming, the next expelling a yodel-like neigh.

This conversation has been edited and condensed for clarity.

WNUR: I’d love to start by talking about your grandma, who you named Tenci after. How did that come to be?

I had been struggling to come up with a name that felt authentic to me. I was making a list of different things I thought sounded cool, but they felt kind of empty. One day, I asked myself, what is one of the most important things to me? What’s something that has roots? And my grandma’s name just popped into my head. Her full name’s Hortencia, but everyone calls her Tenci. I get some musical influence from her. It’s not very direct because my family’s not super musical. I always wish I had a story, like, “My grandma used to show me like all these cool artists” or “I grew up listening to this,” but it wasn’t really like that. My grandma would be singing while doing chores or baking, and she was one of my primary caretakers. She has this really pretty vibrato to her voice. I was really drawn to it. And her voice hasn’t aged. It sounds the same now as it did when I was younger.

She’s really sweet, but she has a feisty side to her, and she’s not very trusting of anyone. She’s really loving. She came to the U.S. from Belize when she was in her 20s with my mom and other kids, and she didn’t really speak English that well. She didn’t really know how to read or write or drive a car. And she made it. So she’s just a very strong, resilient person. I look up to her a lot because of that.

WNUR: What was the process of making the album My Heart Is An Open Field like?

It was a purging feeling, honestly. I hadn’t really spent too much time on the songs. Half the album, I think, I wrote a couple weeks before we recorded and while we were recording. We did it in a really short amount of time because Spencer Radcliffe, who recorded it, was going to be leaving Chicago at the end of the month, so we only had a few weeks to get everything done and for me to finish the songs. It was kind of a rushed process, but I’m really grateful for how it went. It felt more spontaneous, and I didn’t really have time to second-guess anything. Besides a few tweaks, everything was just as is. It was really organic, and it speaks to the songs in a cool way.

WNUR: There was a lot going on when you put out the album at the beginning of June, both with the pandemic and protests. What did it feel like to put music into the world at that time?

It felt strange. It felt not as exciting, because I felt kind of guilty putting stuff out when the focus should be on what’s going on and people should be focusing their energy on trying to be a part of the movement. I’m glad that it’s out, but I wish I could have held out on it a little longer. At the same time, I think that music is very healing, and people also need something to unwind and connect to. So I would say it’s a bittersweet feeling.

WNUR: How has it been not being able to perform in person after releasing it?

It sucks. We were on tour for South by [Southwest] before [the pandemic] happened, and things started getting really bad on our third day of the tour, so we ended up turning back around. We had gone on one small Midwest tour a while ago, but I haven’t gone on a big tour, so I was kind of heartbroken. And in general, not being able to play shows is kind of a bummer. The livestreams and stuff are fun. We just did one with Shuga Records a couple days ago. It was the first time we were all together again playing a show, but it’s not the same as being able to connect with people afterwards and play in front of people… feels like you’re kind of playing to yourself. It’s definitely a weird change, and I’ve been trying to adapt. But, you know, if I had the choice, I’d be playing or touring.

WNUR: You use your voice in so many unexpected ways. How did you develop your singing style?

I don’t really have a straightforward answer to that, because I feel like it’s always changing. I think first and foremost, when I sing, I feel almost out of my body. When I do the heavy vibrato, I just like the feeling of my organs shaking around. I can feel it down to my core. All of it just comes out. I don’t really plan anything when I’m writing a song. The way I vocalize something is very much an expression of the meaning of the song and the emotions behind it. So it’s still developing, and the new stuff that we’re working on is a lot different and even more vocally forward. I use my voice as my main instrument just because, I mean, I know how to play guitar, but I’m self taught. So I rely on my voice a lot to guide me through.

WNUR: There’s so much feeling in your singing. I’m thinking of “Blue Spring” and how you draw out the word “blue” for so long, it almost starts to sound like crying more than a word, which is really fitting for the song.

I really try to personify the way that I sing. With my guitar too, since I’m self taught, I try to translate the emotion to what it would sound like if my guitar was singing. I have this urge to give everything a very human feeling.

WNUR: There’s also this vulnerability and openness in your songs, which I think is especially apparent in the music videos with all the wide expanses, like the desert. I’m curious if that feeling for you is dependent on being in those open spaces, and how you find that living in the city?

It’s funny that most of my music videos are in the desert. I’m always joking with my friends that people are gonna think that I’m not from Chicago, I’m not from the Midwest. It’s kind of a coincidence that those happened – the people that I wanted working on the videos happen to live in those places. But it does speak to the openness of the songs, and it gives a lot of room for the space to be filled up. I feel like there’s a lot of room for interpretation. I think the openness and the vulnerability comes from that searching feeling that was happening when I was writing the record. I had just been going to therapy for the first time and releasing all of these feelings, and everything just poured out of me. It just felt really easy for me to be vulnerable with my music for the first time. Hopefully that translates with the music videos. I feel like they have their own little hidden meanings. The openness is something I want to create around the visuals.

WNUR: I noticed in the “Joy” music video that you have a tattoo of a snake. And one of your songs is “Serpent.” Is there any connection there? Do snakes hold some significance to you?

I mean, I did get the snake tattoo after I wrote “Serpent.” “Serpent” is about lying to yourself but then shedding those old truths and becoming something new, and I think that’s why I’m so fixated on snakes. I think it’s really cool that they can just shed their old skin and start over.

WNUR: What is joy to you?

I feel like joy to me is about soaking in your surroundings in a way where you’re really taking notice of all the small things around you. The feeling of joy is fleeting, and it can come and go. Even the smallest thing can spark new memories or bring back old memories and spark the feeling of joy in you again. I think it’s about trying to find joy around the corner.

WNUR: Where are you finding joy right now?

I’ve been, for some reason, very drawn to birds lately. I’ll just sit outside and watch the birds outside my apartment. I think they’re so fascinating. I go into my head. I’m like, I wonder where that bird has been, what journey that bird has been on. I’d say just being outside in nature as much as possible. Being cooped up is really hard.

WNUR: What have you been listening to lately?

I’ve just started listening to music again. Basically the whole first half of quarantine, I was too sensitive. Anything I would listen to, I would just feel it too much. I’ve been listening to my friend Cole. He used to be in Spencer’s band and helped us design some merch. He released his first album under the name Sqip, and it’s really incredible, really ethereal, but it has some nice singer-songwriter-y moments in it. I have been listening to the new Katie Dey album. Me and my roommate have been listening to the Flo Milli album a lot. And then old playlists. I feel like my go-to I-don’t-know-what-to listen-to are instrumental, Ethio-jazz type music. I don’t have to think about it too much, and I always enjoy it. Listening to it lifts me up.