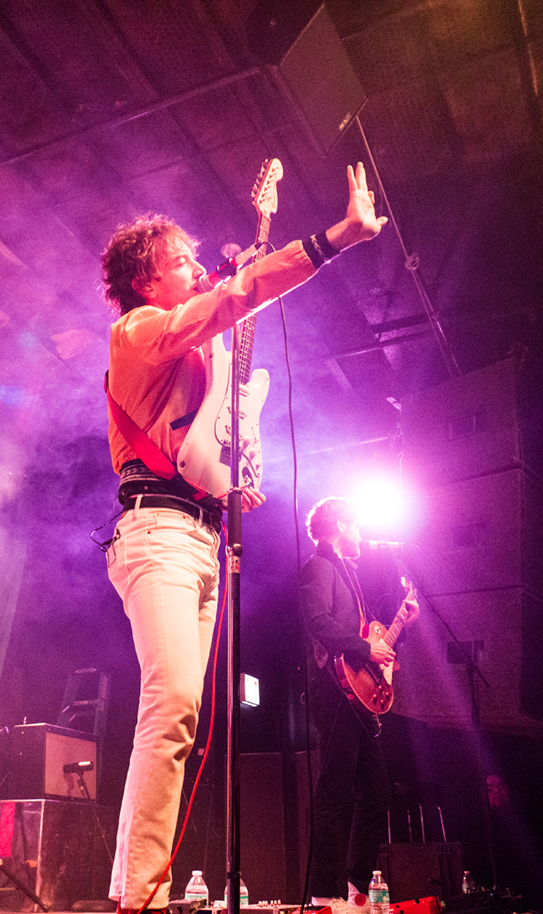 My Friday night started with an Uber trip to a part of Chicago I’ve never been to before: the West Loop. Immediately, I could tell that I would love it. The industrial vibe of the neighborhood was only enhanced by Bottom Lounge’s exposed brick walls and neon signs. The venue was mainly populated with hip 20-somethings, drinking PBR and reminiscing about growing up listening to The Strokes. Their rhythm guitarist, Albert Hammond Jr., started pursuing solo endeavors in 2006, but has only in recent years come into his own with headlining tours.

I got the chance to see Albert three years ago on tour for his album Momentary Masters, a show that lined up pretty much perfectly with my decision to start a music blog of my own. His show was one of the first that I reviewed, so I was shocked when he direct messaged me on Instagram a few days later, telling me that his mom had showed him my review and that he loved it. The short conversation that we had pretty much made my life and became my singular claim to fame. Looking back, it is what convinced me that I could make music journalism my career. So, naturally, when I heard that Albert would be making a stop in Chicago when touring his new album, Francis Trouble, I knew I had to go and that I had to review it. 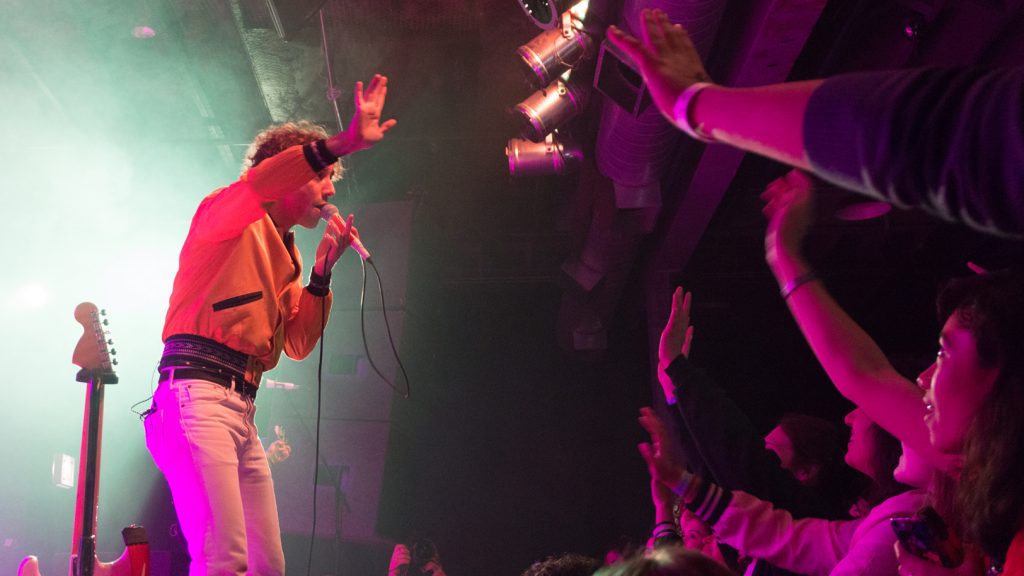 Five-piece band The Marias were the opener, who self-describe themselves as “psychedelic soul.” I had never listened to their music, but had heard a lot of hype surrounding their recently released EP, Superclean Vol. 1. Let me just say, that hype was well-deserved. Frontwoman Maria delivered sugary-sweet vocals along with fellow vocalist and drummer Josh Conway. Their bass-driven tracks and jazzy influences delivered a sensual vibe reminiscent of Prince. However, there was also a hint of that “dream pop” sound that is so popular right now – think Triathalon or Clairo. Songs were sung in both English and Spanish, with Maria’s natural rhythm and stage presence drawing much of the audience to sway in response. Highlights included “I Don’t Know You” and “Only In My Dreams.” Although The Marias only formed in late 2016, they definitely had their share of superfans in the crowd and I immediately added them to my Spotify reservoir.
When Albert Hammond Jr. stepped onstage, I was surprised to see that he had an entirely new and seemingly younger band. However, it was immediately evident within the first song, “Caught By My Shadow” off of Momentary Masters, that they were an extremely talented and cohesive front. Including Albert’s signature white Fender, there were three guitars that worked together effortlessly to deliver the fast-paced and guitar heavy sound of Albert’s music. That explosive first song was followed up by the softer “Holiday” off of 2006’s Yours To Keep, which quickly became an audience sing-along. Wearing his signature white jeans and a yellow bomber jacket, Albert was quick to note that we were the loudest crowd of the tour so far – which is something I do not doubt, as everyone seemed to know the words to every song and proceeded to shout them. 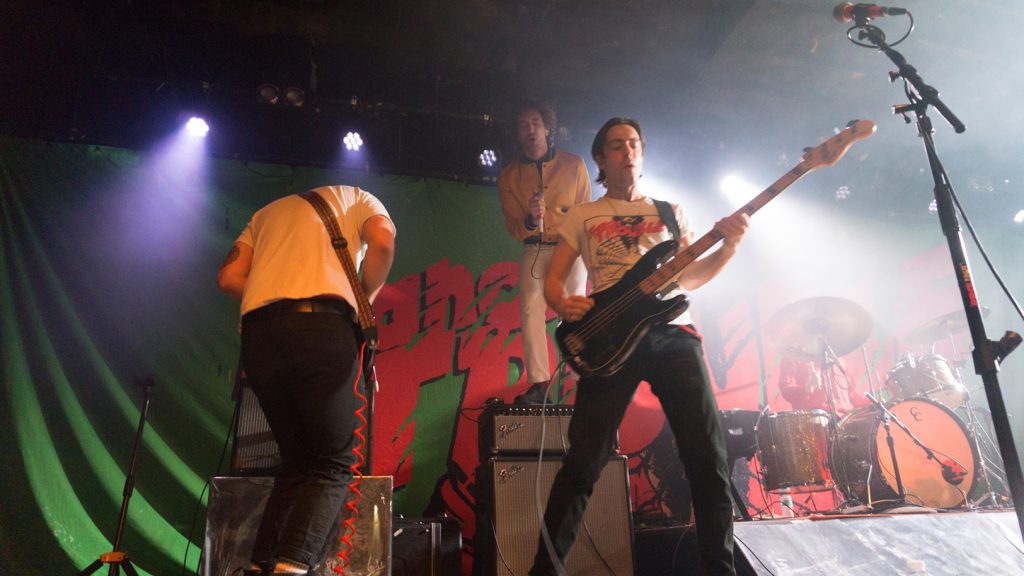 The rest of the set consisted of almost every song off of Francis Trouble, with some older songs mixed in such as “Side Boob,” “St. Justice” and “101.” There’s no doubt that Albert has a captivating performance style. He often held his microphone like a cigarette, in between two fingers, and used his bandmates’ amps as platforms to jump off of. The set ended with “In Transit,” his song off of Yours To Keep that was famously used in The Strokes’ tour documentary of the same name. It seemed that the entire crowd joined together in excitement to sing and dance, and then immediately demanded an encore once the last few chords rang out. The band wasted no time coming back out, but Albert instead entered the crowd for “Postal Blowfish”, a Guided By Voices cover that appeared on Yours To Keep. 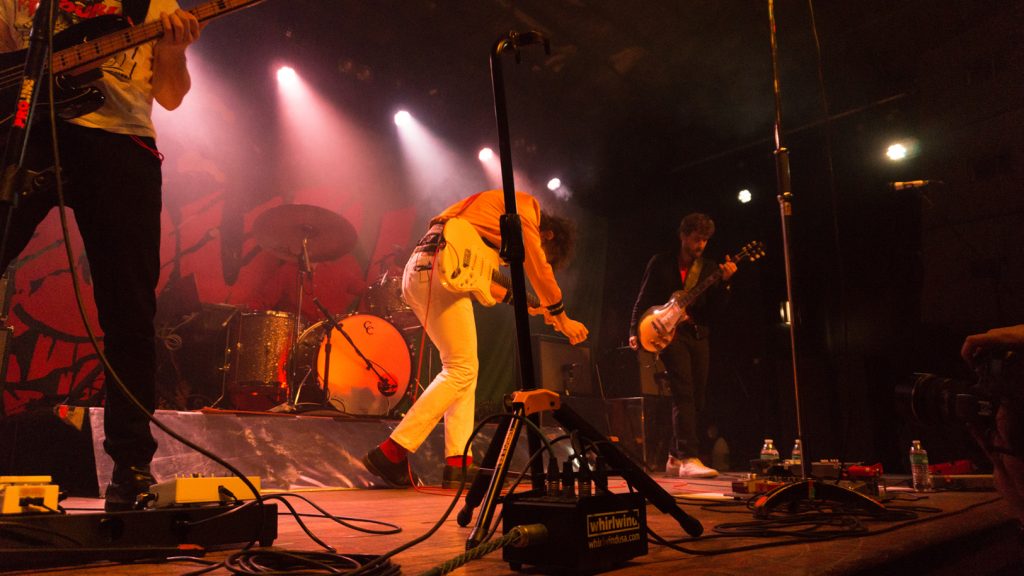 As one can imagine, Albert being in the crowd got pretty rowdy, but he seemed to be having the time of his life. After getting back on stage, Albert played a few more songs off of Francis Trouble as well as my personal favorite, “Blue Skies” from Yours To Keep, a soft ballad that he didn’t play during his last tour. That was enough to make my night, but it didn’t stop there. After the show, I got the opportunity to meet Albert, who somehow remembered me from my review three years ago. I usually hate to meet musicians that I love because I’m scared that I’ll be disappointed by how they act in real life, but Albert was extremely gracious, meeting and taking pictures with everyone who wanted to and carrying out real conversations.

There’s no doubt that Albert Hammond Jr. is a rockstar – but he’s also more than that. It was clear that he had made a positive impact on countless people in the audience, myself included, but it was also evident that he is in this business for the right reasons. I hope that never changes.