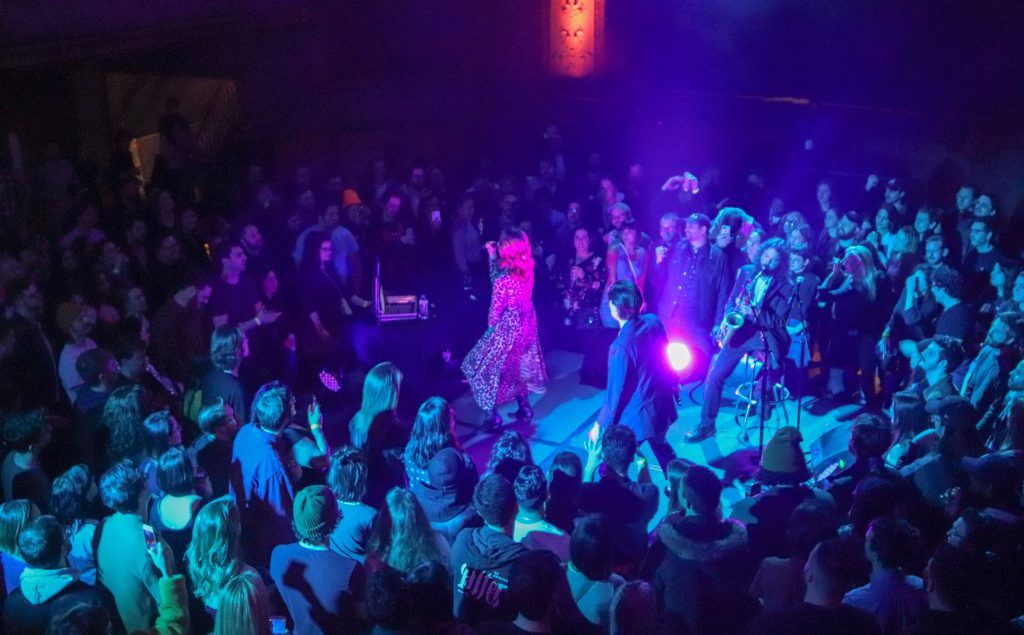 I could see the sweat drip down Alex Cameron’s cheek as he sang these lines six inches from my face – close enough to attest that his face does sort of resemble Beckham.

The atmosphere at Thalia Hall was incredibly intimate. The small, square stage referred to as “The Round” was only elevated about two feet off the floor. Joining Alex on stage would have required comparable effort to climbing a single stair. I was shocked that no one attempted this feat since there were as many cocktails in the audience as people, although the stage was commonly utilized as a counter for unfinished drinks. 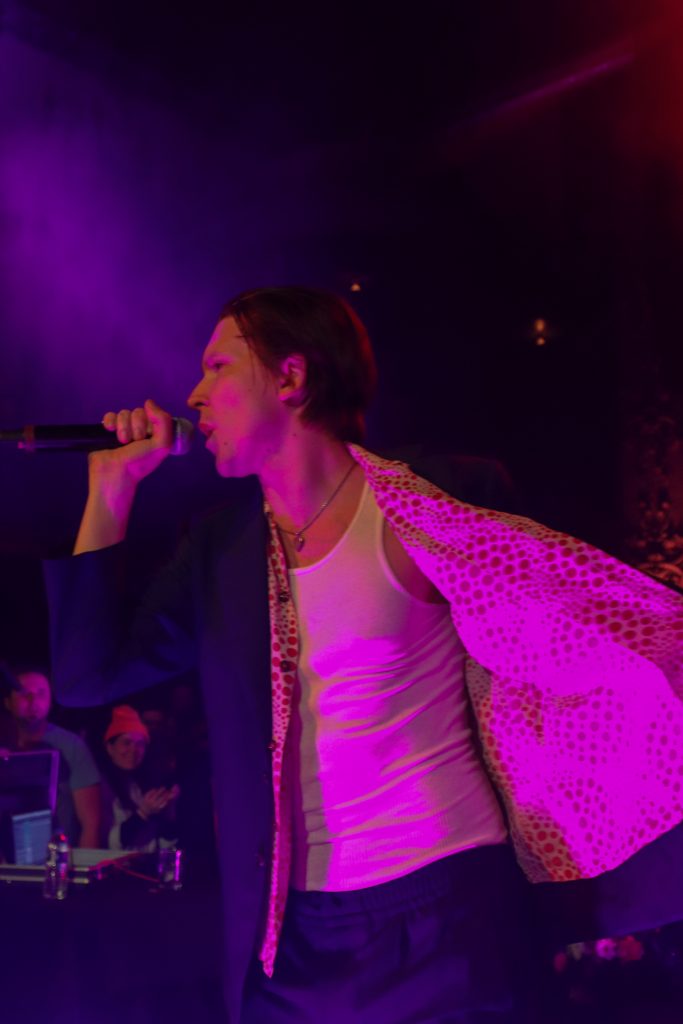 Alex Cameron is truly a character – in all connotations of the word. He not only sings through the lens of a fictional sleazy character on his most recent album Forced Witness but also personifies a truly captivating unconventional stage presence. At Thalia, Alex wildly danced across the stage with such natural ease that I had difficulty believing that this was, in fact, his first performance using a cordless microphone. There was certainly no shortage of his signature side-step dance move (watch the Stranger’s Kiss music video for a tutorial).

Alex’s satirical nature revealed itself the very moment he emerged on stage. In a tri-layered outfit composed of a navy suit, a red-polka dot button-down, and a white muscle tee, he opened with “Studmuffin96,” an 80’s synth-inspired song about an older man’s sensual relationship with his young lover – a girl who is “almost seventeen.” Not your typical subject for a catchy tune, but the facetious lyrics did not stop the crowd from going absolutely wild. Everyone in the audience seemed to merge as one unified radiant force; the 360-degree nature of the stage allowed for a one-of-a-kind experience in which I often forgot that the people singing and laughing around me were in fact strangers. 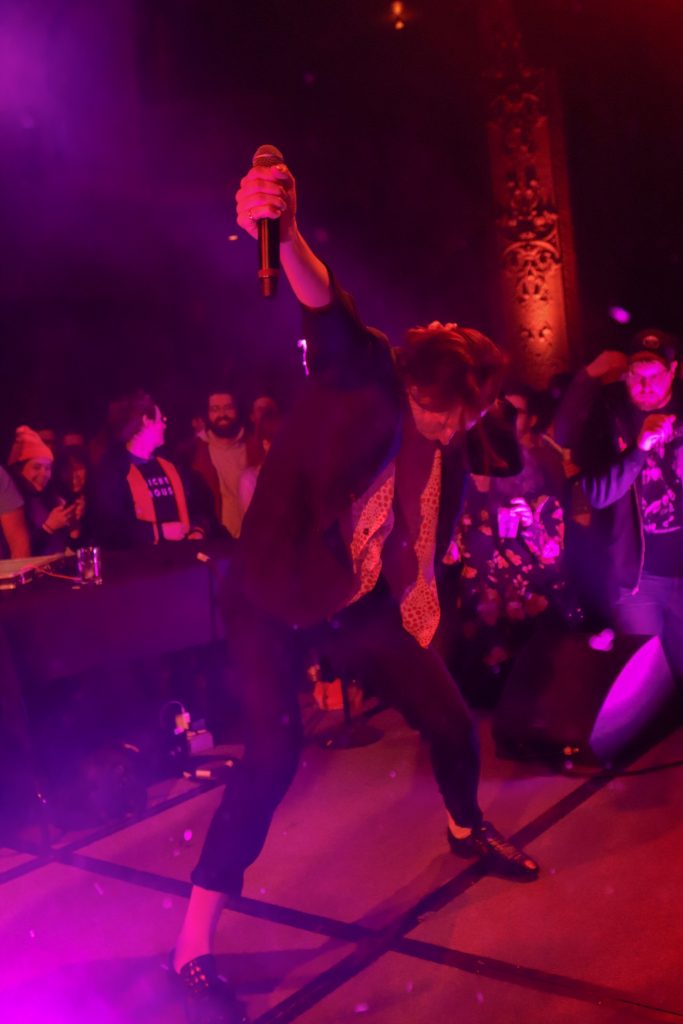 I left the show feeling as if I had just witnessed a nearly perfect fusion of incredible live music and comedy. Alex’s hysterical commentary between songs completely undermined the mediocre stand-up set of the show’s first opening act. A large portion of his jokes were centered around his saxophonist, or in Alex’s word’s “business partner,” Roy Molloy, the only other musician to accompany him on stage (Alex queued the rest of the instrumentals before each song with a quick click on his laptop). Alex loves to boast about Roy’s peculiar traits, such as his claim to fame as being both a renowned train conductor and the world’s “most prolific google reviewer” (whether these claims are mythical is up for debate).

Roy contributed a significant comedic element as well during his famed stool review, a hilarious improvised evaluation of the stool he sits on during the show. This time, he gave the dubbed “Shibatsu Bar Stool” a 4 out of 5. Well done, Thalia. 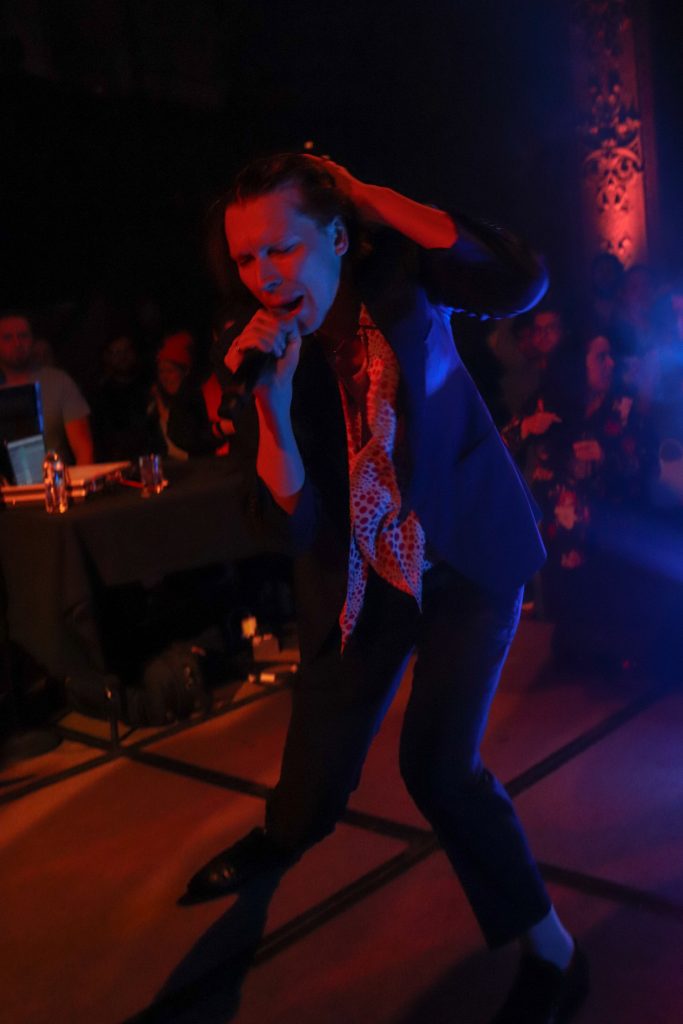 Alex boldly concluded his show without an encore, certainly leaving his fans deprived of more entrancing synthesizers. However, Alex was surely speaking to the audience when he sang, “We’re gonna get my show back.” The brevity of his set undoubtedly left the crowd envisioning their next opportunity to personally experience Alex’s outrageousness – I know that’s certainly what was on my mind.