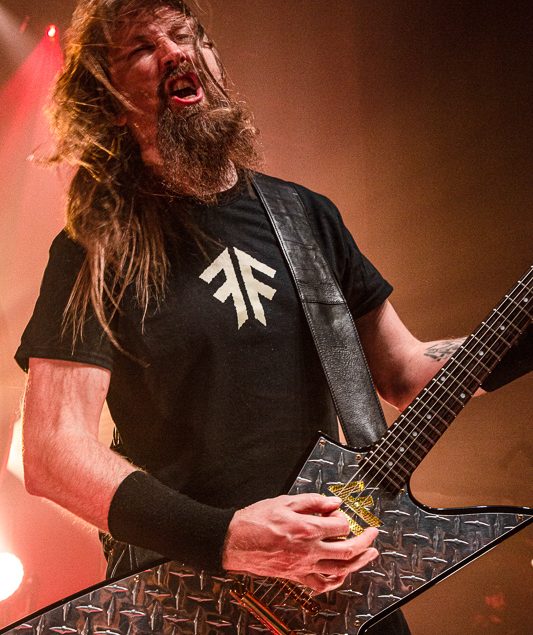 Sweden: the heart of melodic death metal and the producer, in my opinion, of some of the finest death metal bands in the world. Each of the bands that played Monday night at the Riviera Theatre originated from the country, and each one brought decades of experience and passion. If only I could have actually seen the stage behind rows of giant, burly men with greasy hair.

“I wish I’m that cool when I’m that old,” the man standing next to me remarked of the grey-haired rock stars jamming onstage. The night’s opener, Grand Magus, consisted of three, middle-aged men who exude the energy of those half their age. Their sweeping riffs and Iron Maiden-esque sound harkens back to epic, 70s power metal, and the pagan themes in their lyrics served as the perfect opening taste of what is to come later in the evening.

After an incredibly short set by Grand Magus, the heaviest band of the evening emerged: At the Gates. The pit opened up, (although unusually small for a death metal show), and the band’s reputation for its loyal fan base proved true… somewhat. To my disappointment, the crowd remained fairly still even though a few incredibly rabid At the Gates fans shouted the lyrics with the utmost gusto.

Before the show, I had watched clips of the group’s shows from the 90s in which they performed without a stage, merging as one with their audience. Only a small handful of 30-something, bearded men replicated the same excitement and wild dedication of the fans at these older shows. Although I can’t really blame them: Who really wants to jump in the pit and crowd surf at 35 with a bad back?

Next in line was my moral dilemma of the night: Arch Enemy. As one of the very few female fronted metal bands in the industry, Arch Enemy tends to be the subject of equal parts devotion and condescension. Some, especially female fans like myself, love that they get to see an incredible woman vocalist in leather and spikes growling her way across the stage. Others give the band flack for getting so much attention just because they have a girl (gasp). I’ve seen the group live twice and watched them receive two very different responses. The first time, the entire crowd sung along, yet the audience gave the five piece a standstill, arms-crossed reaction this evening.

I’ve always loved their music and enjoyed the mesmerizing range and power in vocalist Alissa White-Gluz’s voice. Their riffs are catchy and they use the perfect blend of electronic background synths to support their more old-school sound. However, compared to both At the Gates and Amon Amarth, their performance lacked that extra, raw energy that sends that special, vibrating adrenaline rushing through the crowd.

Finally, the single most Viking group to ever exist in modern music takes the stage. Earlier in the night, I passed enormous men in war paint, kilts and furs. Near the front of the stage, a man hoists a drinking boot over his head while others chug unknown substances out of drinking horns.

Why? Most everyone in the death metal community knows Amon Amarth as the leading name in Viking metal, although they sing about everything Nordic, pagan, and medieval. The band name itself is the Sindarin translation of Mount Doom from Lord of the Rings. The drum set on stage formed the shape of a Viking helmet with two horns jutting from the side, and the band members sported lusciously long locks, gruesome beards, arm bracers, and all black attire — a spectacle worthy of the Norse gods themselves.

It’s not until Amon Amarth started their set that the crowd finally found their energy. Jumping ensued and hundreds of fans banged their heads to the crushing death metal and singer Johan Hegg’s impeccably throaty vocals. Even then, the audience’s interest fell below average compared to other metal shows. Perhaps this is due to the generally older crowd or the focus on melodies and riffs rather than breakdowns, but either way, every band that evening demonstrated their years of experience with constant enthusiasm and sets that truly made me remember my love for metal.