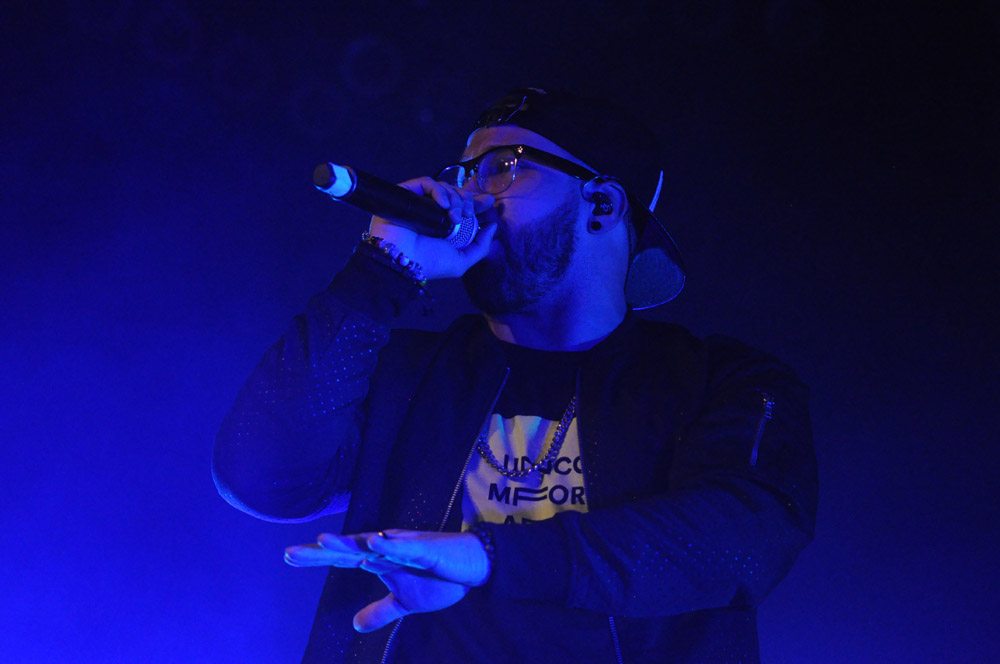 Who is Andy Mineo?

Andy Mineo, an up and coming rapper from New York City, recently released his sophomore album, Uncomfortable, which meshes confession, faith and old school hip hop with jazzy undertones to create an eclectic sound style that is, as Mineo said in a phone interview, “uncomfortable in its approach.”

The album’s title track hit No. 3 on Hip-Hop/Rap iTunes charts just after a day of being released and Mineo has since interviewed with Billboard Magazine and is rumored to attend the BET Hip Hop Awards this year.

After touring with Christian hip hop artist Lecrae, who in the Urban Daily he describes as a mentor figure, Mineo decided to debut his own tour as a headliner. The Uncomfortable Tour came to the House of Blues Chicago on Saturday, October 17 and Mineo invited the WNUR Media Team to cover it.

Get Uncomfortable: Mineo Storms the House of Blues in His First Headlining Tour

[su_pullquote align=”left”] “Like an eight-ton truck with a busted brake, the show refused to slow down.” — DJ Oh[/su_pullquote]

After an hour-long opener by R&B singer SPZRKT and spoken word rapper Propaganda, the pumped-up crowd held its breath before the darkened stage in primal excitement.

Suddenly, a cube-shaped screen in the center of the stage lit up in a bright flash, displaying black-and-white video footage of a city. As soon as the unmistakable intro chorus of “Uncomfortable” started blaring, the crowd erupted in a roar of joy and chanted along, Andy Mineo still nowhere in sight. As the chorus came to a finish, a purple light erupted from the top of the cube, revealing the bespectacled rapper standing upon it as he spat his first verse of the show.

It was a breathtaking intro that set the tone and pace of the show to an extremely high bar. And like an eight-ton truck with a busted brake, the show refused to slow down. By the time the second track “Know That’s Right” came on, the crowd was jumping so hard I could feel the ground shake from the second floor balcony. Without giving the crowd even a second to rest, Mineo charged on with “Now I Know,” then brought the pace down with the mellow beats of “Hear My Heart.”

The burley Caucasian rapper filled the small stage of Chicago’s celebrated House of Blues both physically and charismatically. Each bar he spat and each stomp he took across the stage emanated confidence, and his lyrics overpowered the deafening bass and live drum set.

“Welcome to the Uncomfortable Tour, Chicago,” Mineo finally said, greeting the crowd for the first time after a four-song intro to the already adrenaline-soaked performance. It was impossible to tell that this was the 27-year-old rapper’s first headlining tour. He was calm. No, not calm—he had the composure and dazzle of an experienced performer. He even found time to crack up the fans by playing around with his vocal harmonizer.

No time to waste: After a brief banter with the crowd, Mineo jumpstarted the show again with “Vendetta,” followed by the banger “Desperados.” At this point, I was certain the balcony would break as the crowd jumped up and down in synchronized seismic jolts.

What followed for the next hour-and-a-half of the jam-packed show was a slew of bangers and hits including “Paisano’s Wylin’,” “Uno Uno Seis” and “Uptown.” Each song was met with rap-alongs and frantic jumps from the fans. Even the somber intermissions with messages about Christian faith (which was met with unfaltering enthusiasm from the crowd) didn’t seem to slow the show down.

Perhaps what made Mineo’s show so energetic and engrossing was not only the charisma of the black-rimmed rapper himself, but also his onstage crew that carried each song to another level: DJ Dre The Giant mixed the show along flawlessly, Propaganda dropped prophetic bars to intermittently break up the pace, and the live drummer Black Knight went ham on kick and snare to give each performance a high-octane boost.

During one hilarious intermission, the entire Uncomfortable tour crew came to the stage to participate in what could only be described as a spontaneous dance-off to various love songs ranging from Beyoncé’s timeless pop single “Crazy In Love” to Haddaway’s Eurodance megahit “What Is Love.”

The crowd loved every moment. And one could tell the Uncomfortable crew did, too.

With the brilliant chemistry of both the crowd and the talented crew, Mineo stormed up the House of Blues with a wild show. He’s charging his way full-throttle through the seven-week tour that spans 26 cities in 19 states, and it seems like he isn’t going to slow down any time soon.

The Person Beyond the Stage Lights

[su_pullquote align=”left”] “There is a high value placed on being ‘authentic,’ being ‘real,’ so I think I’ve just been following that trajectory. ” — Andy Mineo[/su_pullquote]

WNUR: I wanted to start with talking about your development as a rapper, you grew up in Syracuse if I’m not mistaken and moved out to New York City. I’m interested to know if hip-hop was a culture you were surrounded by from a young age and who you looked up to?

Mineo: Yeah, basically my brother bought me a Jay-Z CD and a pair of New Balance sneakers for Christmas one year and that kind of began my journey in listening to hip-hop. And then my other brother listened to Pantera and my sister listened to Usher so I had a very eclectic crew of people around me. They shared many different kinds of music with me and I think that’s why music is very eclectic but it has a hip-hop foundation.

Mineo: For this project I really wanted to try to create a cohesive body of work, where it felt like the same producer or producers worked on it the whole way through. Instead of a jumble mixed thought I wanted to showcase a cohesive thought and that was a challenge for me because in the past I’ve just kind of let all my influences splatter onto the canvas in a sense. So I kind created a self-limiting system for myself and the guys we created the project with to try to push the boundaries in a different way creatively. For me it’s uncomfortable in its approach in a lot of ways: For one, every song is unique, every song is different, there’s no song on that album that is the same song twice even in format or style. And then also we’ve broken a lot of song structure norms, so these aren’t just your typical 16-bar rap verses, 8-bar choruses, songs. These are songs that evolve and grow and have different sections, and it’s kind of a journey for the listener. The songs tie in together thematically and musically as well.

WNUR: I really dug the jazz sample based, old school hip-hop vibe underlying a lot of the record. Is there something specific you were listening to when you were working on Uncomfortable?

Mineo: Nothing specifically, but I think a lot of my influences, just like loving the golden era of hip-hop and feeling that alot of the hip-hop today just kind of sounds the same, very trappy, southern and singy. I wanted to do something that I was inspired by and not just follow the trends of today. And that was a risk because it’s not popular and I was okay with embracing that risk and trying something that wasn’t sure to work, because one of my goals as an artist is to distinguish myself and set myself apart from other artists with not just my content but also sonically.

WNUR: Along that vein of being comfortable about what you are presenting, one of the big things I noticed listening to your record was how personal it is. Many of the songs touch on very personal subjects and then within that you tend to put your faith out there. Could you talk a little bit about that? Have hip-hop and your faith always been interrelated?

Mineo: I think hip-hop has always been a place for people to share who they really are or who they want to be. There is a high value placed on being ‘authentic,’ being ‘real,’ so I think I’ve just been following that trajectory. My relationship with God informs my entire life, and that’s why I tend to shy away from the term “Christian Rapper” because it feels like a gimmick to me. My relationship with God informs the way I do life, the way I do money, the way I do marriage, the way I do friendship, all those things, it even informs the way I think and the music I make. So the ideas of God and faith are all throughout my music because that’s a real part of my life, something that is more woven into who I am rather that sitting on top as an identity.

WNUR: I can definitely agree with that as a listener. Unfortunately that’s going to be our time, anything else to add?

Mineo: That’s it man, just come out to check out the concert. Andymineo.com has those tickets for The Uncomfortable Tour 2015.