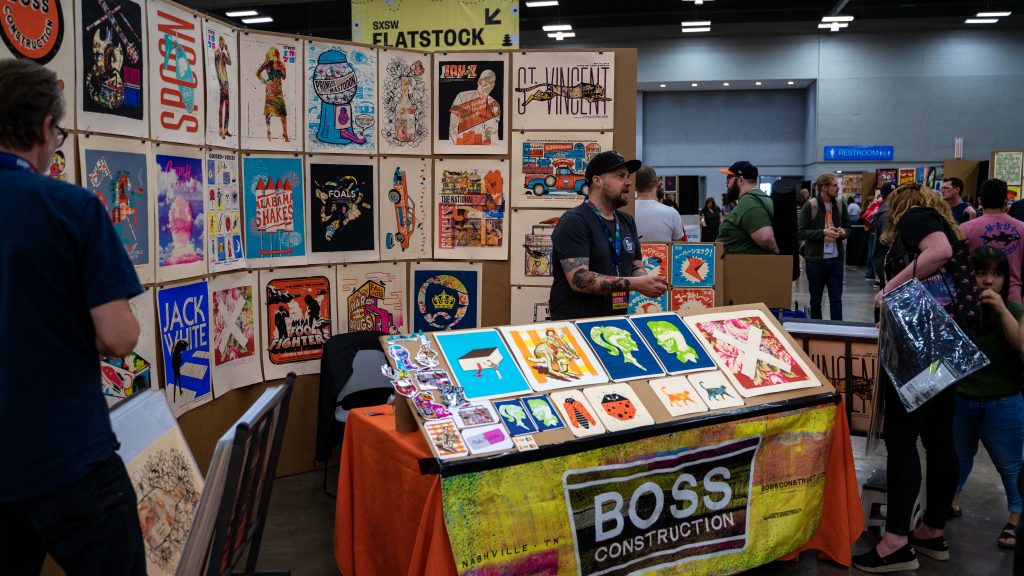 In discussions about the music industry, graphic artists are often overlooked — a strange fact considering that we adorn our walls with posters of our favorite bands, buy t-shirts depicting the same artwork, and sometimes even etch iconic album covers permanently into our skin… I Googled “music poster industry” and the first page of results was chock full of RedBubble advertisements and Amazon links, but surprisingly sparse in journalistic content. I did, however, find three articles on the topic: one relatively recent but intensely narrow article by Smithsonian Mag, focusing only on Chicha music, and two with slightly broader perspectives, written in 2004 and 2014 respectively. Clearly, this is a topic that has been overlooked.
If you’re anything like me, you admire and appreciate great art, especially art that promotes a band you love. While attending South By Southwest in Austin this year, I took a stroll around Flatstock 69: the part of the festival dedicated to showcasing the graphics industry and the visual artists behind some of our favorite designs. I sat down with a long time family friend and seasoned music-industry veteran and we talked a little bit about his job. He’s had the privilege of working with big-name clients, including The Arctic Monkeys, Jay Z, Death Cab for Cutie, Spoon, Guided by Voices, The Alabama Shakes, Jack White, Kia Motors, Wonka Candy, and Vans Warped Tour to name a few.

What follows is a slightly condensed version of said conversation in Q & A format. 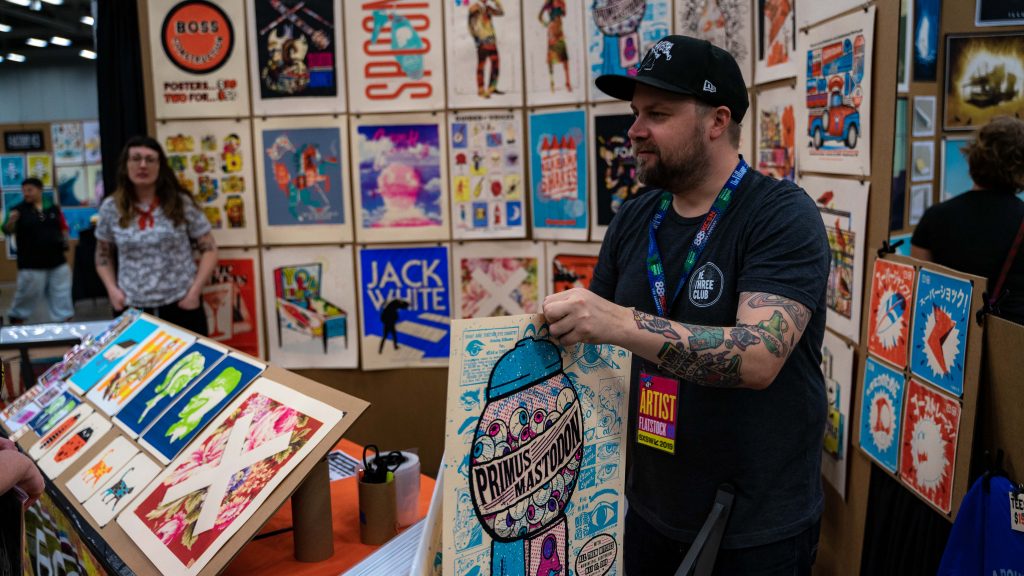 Would you mind introducing yourself?

Yeah, my name is Andy Vastagh, President of the American Poster Institute and the owner and designer and printer for Boss Construction… my design company.

So, you’re self employed

And how many employees do you have working for you?

That’s really cool, can you talk about your path to where you are today… how you got here?

Yeah so, I was making artwork for friends’ bands, for these little shows. That was kind of my way to get into the shows because I was always wanting to go to the shows but didn’t have enough money to actually pay to get through the door. So I found a way to align with the bands and get to be a part of the scene without knowing [how to play] music.

So you’ve worked with some pretty well-known artists. Do you usually work with the artist directly, or is it through their manager, or label… How does that work?

It can be a variety of things, between management, venues, promoters… but often it’s me and somebody in the band who sort of has the lead on creative direction and we just go back and forth. Like Adam from War on Drugs just emails me when he has an idea or he asks me to send him some ideas. I work directly with him because he likes to have a hand in that kind of stuff.

Okay, that brings me to another point; how does licensing and permissions work when you make art for, or sometimes with, a group?

Well, we have a couple of different arrangements. One, they can buy the artwork outright. That’s the top-level fee. A lot of times, they go for the middle tier fee… Essentially I give them a little break on design or printing, with the agreement that I can keep a portion of that limited edition run and sell it myself, via my website or poster shows at festivals, that kind of thing. That one usually works out best; they save a few bucks in the end, and I… have the good will to exhibit and sell them myself. And I make more money that way. IF they sell, that is.

How competitive is the industry? How hard is it to get gigs lined up?

I’d say most people start kind of slow and low… Mostly [working with] smaller tier bands, local bands, or working with venues. But when you start to get the venues that are getting decent sized touring acts coming through, you can connect with bands like that, then it kind of starts to evolve. Then, promoters at the bigger venues see what you’re doing with these smaller guys, and say, “We wanna do that too!”
I started with probably one of the smallest clubs in Nashville when I started really getting serious into it, and now I do stuff for like their giant arena… But it wasn’t right out of the gate that I was doing stuff for Bridgestone Arena.

So you’d say most of your business is word of mouth?

Yeah, word of mouth, or just being out. Doing little local things, or doing things like this. Flatstock here in Austin, or the one we do in Chicago, you have a lot of people (especially at SXSW) that are in the industry, wether they’re bands or management or they work for a record label. And they’re always looking for something to kind of step up their brand.
You can walk through here and see seventy-five different artists’ work. It’s kind of like a living, breathing catalog of amazing artwork and different things. And you can meet the people who are making it in the same place.

So I first met you at Warped Tour in Nashville, and now again in Austin. You also mentioned shows in Chicago. Sounds like a lot of travel!

Yeah! Especially in the summer, I do a lot of traveling. Starting in May, and going through November. I do larger festivals between Bonnaroo and Firefly Festival and Pitchfork in Chicago. After this one, we go to Barcelona at the end of May for a festival called Primavera Sound. This will be my seventh or eighth year. It’s a good excuse to go to Spain, and it’s an amazing festival. It’s probably 80-100,000 people for four days, it goes from 5pm to 5am… it’s wild.
But travel can be tiresome and I’ll miss my dogs and my bed and then I get to enjoy coming home. But yeah, I’ve gotten to see a good bit of the world [based] on the sole fact that I make and design concert posters.

Awesome! On a closing note, what’s one thing that you’ve come across or learned, be it about yourself or anything, that you didn’t expect to.

I learned to be confident in whatever is is that I’m doing and to make it as authentic to my instincts and aesthetics and beliefs and not worry so much about making something that’s gonna match with someone’s couch, ya know? Just make it for you, and if it’s honest enough, you’ll find the right audience.

If you’re interested in seeing and possibly purchasing Andy’s artwork, visit bossconstruct.com
or check him out on Instagram at @bossconstruct