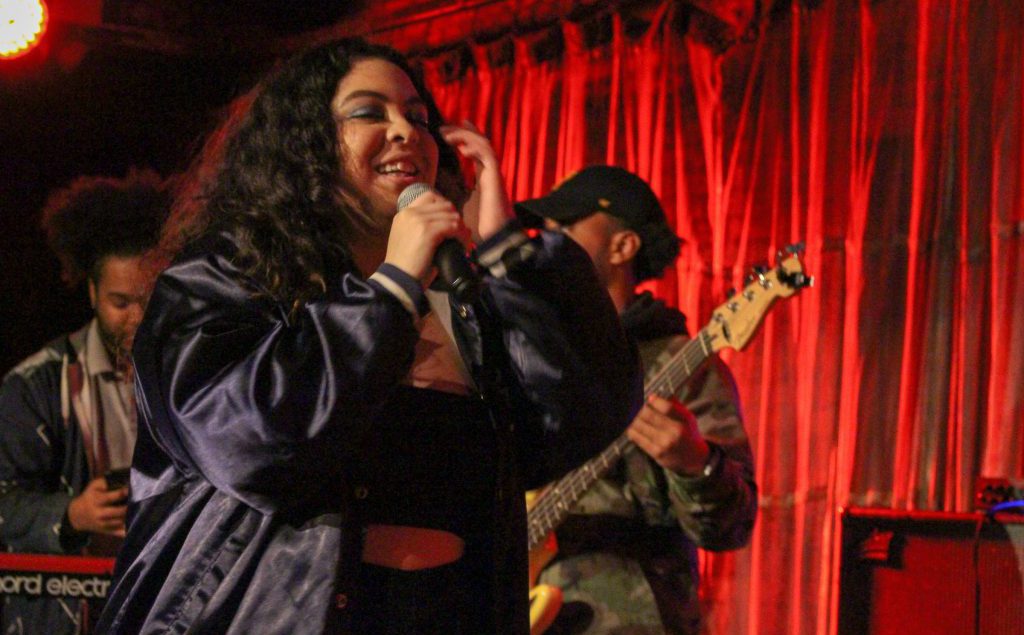 Evanston’s Space was the perfect venue for A&O’s annual benefit, hosting Chicagoland-natives DJ King Marie, Kaina, Monte Booker, and Kweku Collins for an intimate, energetic, and emotional evening. A fundraiser for Young Chicago Authors, these artists’ performances got at the heart of Chicago’s music scene: community.

DJ King Marie hour-long set came first, a dynamic collection of beats, songs, and sounds that touched on Chicago’s deep roots in Hip-hop and R&B. Sporting a navy blue jumpsuit, she brought a particular swag to the stage, sampling songs with deep female vocalists backed by mellow beats, giving a fresh and danceable feel to traditional R&B tunes. The deep blue illuminating the stage-matched her cool vibe, drawing a timid audience closer. As more listeners piled in, she transitioned to high tempo beats, featuring crowd (and Chicago) favorites such as Ravyn Lenae’s “Sticky,” Chance the Rapper’s “All Night” and Jorja Smith’s “On My Mind.” DJ King Marie’s transitions were smoove, and by the end of her set, the crowd clearly wanted to keep grooving. 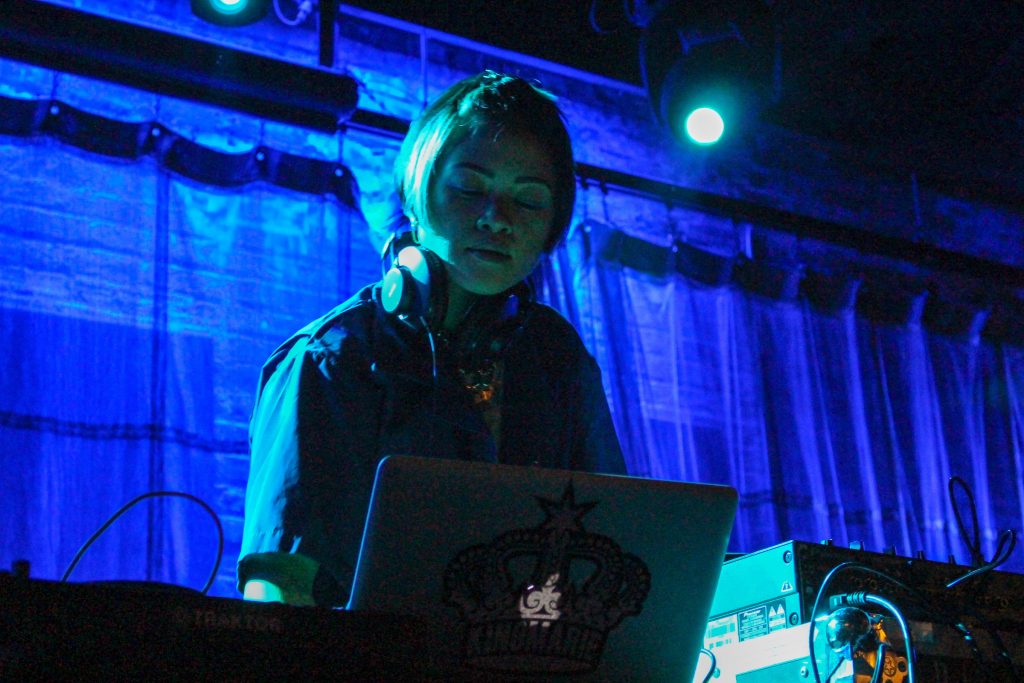 After a short transition, a guitarist, bassist, drummer, and keyboard player drifted to the front, playing jazzy scales as the crowd patiently waited for the next performer. Kaina finally graced the stage, grabbing everyone’s attention with her glittery top and luscious curly hair. Another young Chicago-based performer whose Instagram and Twitter bios read “I work hard and love my city,” Kaina’s music tells of family, love, intimacy, and gratitude.

Within minutes of her entrance, she had enchanted the room with her soft, savory voice, inspiring the crowd to sing along to 4u, a pleasing set-opener and featured song on her 2018 EP. “I could be anything for you,” she sang in a slow, almost seductive manner, as some voices in the crowd joined in. She followed up with Cry, then f*cked up, which she playfully preceded by asking: “Do you ever regret not making a move?” We all laughed, and the positive, silly energy flowed into her slow repetition of the Spice Girls’ notorious lyrics ‘If You Wanna Be My Lover’ — an instant crowd pleaser. A cover of “Dos Gardenias” by Buena Vista Social Club came next. A beautiful, relaxed rendition of this Cuban-inspired hit showcased Kaina’s proud Latinx roots, and with disco lights overhead and a magical piano solo, the passion reverberated through the room.

She finished up the set with Happy (off 4u), dedicated to those in life that “ground you,” featuring a polished guitar solo. Finally, came “Honey,” her #2 Spotify hit from a 2016 EP, a collaborative piece with Chicago’s own Andrew Bedows and Burns Twins. A dreamy drum solo sparked the crowd into song, and as we followed along to the song’s catchy bridge, repeating  “You’re sweet Asl, give you all my love,” the sugar in her voice flowed through us. “You’re sweet as hell, Northwestern,” she said, as we begged for more. Thanks to her Chicagoan, community-driven heart and endearing vocals and lyrics, Kaina made everyone feel loved. 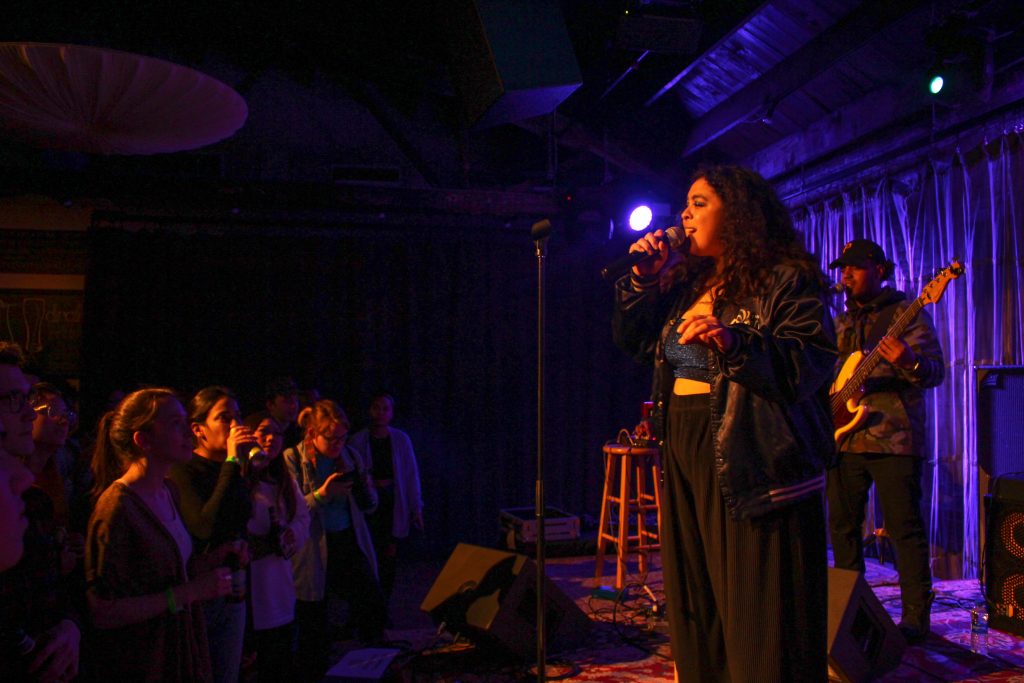 Monte Booker came up next, shifting the soft, intimate vibe into yet another upbeat atmosphere. He sampled many crowd favorites, beginning with Childish Gambino’s trap hit “This is America,” which initiated an instant crowd sing-along. The melodic backdrop to Gambino’s song blended beautifully into a series of major scale runs on a harp, creating a dreamy feel to the already relaxed room.

Booker did not stick to the slow pace for long, though. As the harp sounds fizzled out, he shocked the audience with an explosive beat behind “Like a Light” by Travis Scott, sparking another crowd outpour. He kept this energy up by adding tropical undertones to the 2007 throwback “Pop Lock and Drop It,” which gave the traditionally pop-y song a more groovy fix. He finished up his set with three more hits: Amine’s “Reel It In” (2018), “Anita” by Smino (2017), and one of his earliest songs from his 2015 album Soulection white Label, “Kolors ft. Smino.”

Monte Booker left the high-energy crowd full of excitement, gearing up for A&O’s last performer, Kweku Collins. An Evanston native, Collins was delighted to be back in his hometown, as he mentioned in an after-show interview. “It’s fairly surreal,” he said. Indeed, Collins’ connection to the space was clear, as he nodded at familiar faces in the crowd and shared anecdotes about his beloved hometown throughout the dreamlike set. 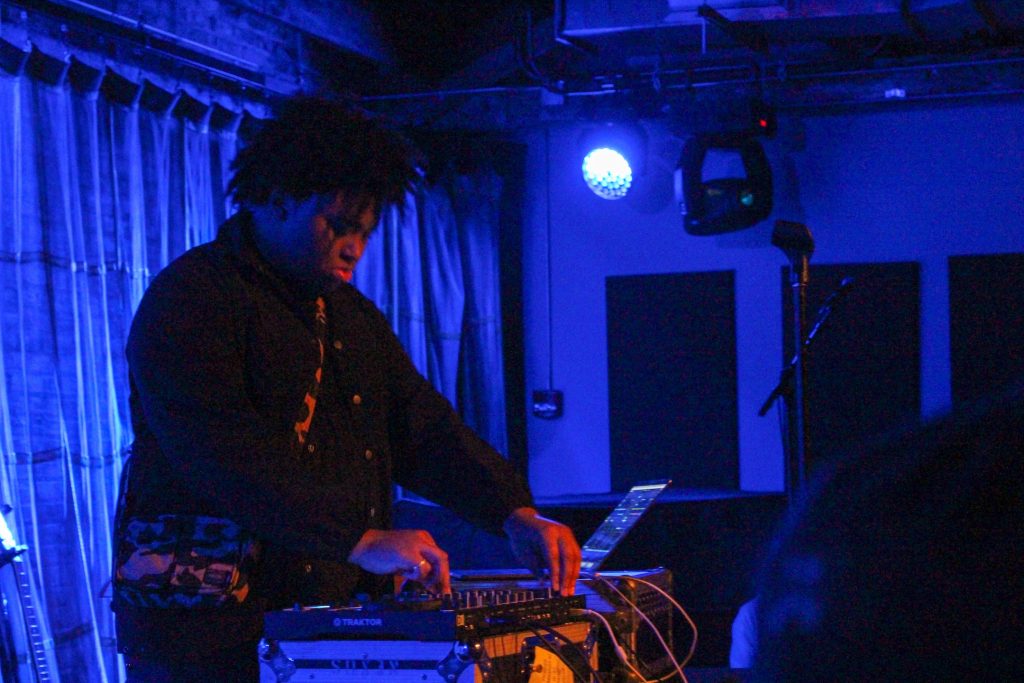 Collins began with “Dec. 25”, a deeply emotional song about loss, nostalgia, and the fleeting nature of time. This may have been a bold move, but Collins does not stray away from shocking his audience with emotion. Blending his signature groans with bursts of song and bass, this powerful set-opener, from his latest album Grey (2017), immediately engaged the crowd.

He then came on with his 2018 single “ET,” followed by a series of songs from Grey, including “Oasis2: Maps”, “International Business Trip”, and “Aya.” He also featured some of his older hits, such as “The Last” from his 2016 album Nat Love, and, closing his eyes throughout most of the song, he sang his Spotify #1 hit “Lonely Lullabies.” As the meditative song slowed to a stop, he awakened and admitted that he had forgotten we were all there.

He finished off his set with “The Outsiders,” another crowd favorite from Nat Love in which he shouts out the four directional neighborhoods of Evanston. The Evanstonians (including myself) in the room loved it, sharing a particular joy and pride with Collins for our hometown.

It is no wonder Collins enjoys performing in the place he grew up. He, like the other three performers, is proud of where he comes from, and as he spoke a bit more in depth about the various types of crowds he encountered while touring, he noted that the blended Northwestern/ Evanston audience made him feel “physically subdued” and “at home.” That’s all an audience could ever want, right?