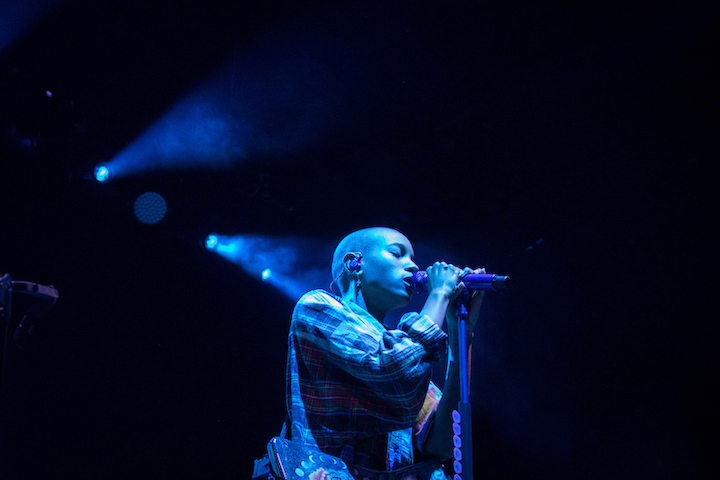 The first word that comes to mind to describe R&B singer Raveena Aurora is angelic. Her voice, her performance and her presence on stage all vouch for this description. Fitted in an iconic Virgin Suicides skirt, Raveena started her set by revealing it was her first concert in over two years.

The stadium, thanks to A&O’s continuous advertisement of Blowout, was packed with over 2,000 people eager to see live music. In spite of this, the performance felt very intimate with Raveena stopping in between songs to explain what inspired each song: “This is a song about a girl who broke my heart,” Raveena half whispered into the mic before singing her psychedelic song “Headaches.”

Her flowery visuals and lyrics went well together, and the whole crowd seemed enamored with both her and her music. When her set was over and Raveena left, I found myself wishing she had longer to perform.

As soon as the lights went out, the crowd started screaming and cheering, finally reaching a crescendo when Willow Smith strutted onto the stage. She greeted the crowd and immediately started her set.

Starting with “Transparent Soul,” Willow immediately made it clear her voice was going to be the star of the show. Her vocals were raw, powerful and angry. Her accompanying guitarist was also a powerhouse, really adding to the punk rock vibe.

After a quick interlude where Willow yelled “F**K You!” into the mic in all her punk goddess glory, she invited The Anxiety on stage. The audience cheered for the opportunity to hear “Meet Me at the Spot” in its full-fledged glory. After an attempt at getting the crowd to mosh (admirable, but in vain), The Anxiety shouted out “Sara, the smartest girl I know, went here,” much to the Northwestern crowd’s delight.

Walking out of the concert, I felt more than a little disappointed by Willow’s quick exit. Luckily, right as I was exiting the stadium, the lights went out, signalling Willow’s return. What followed was an epic punk rendition of Willow’s 2010 hit “Whip My Hair,” complete with Willow’s screaming and an insane guitar solo.