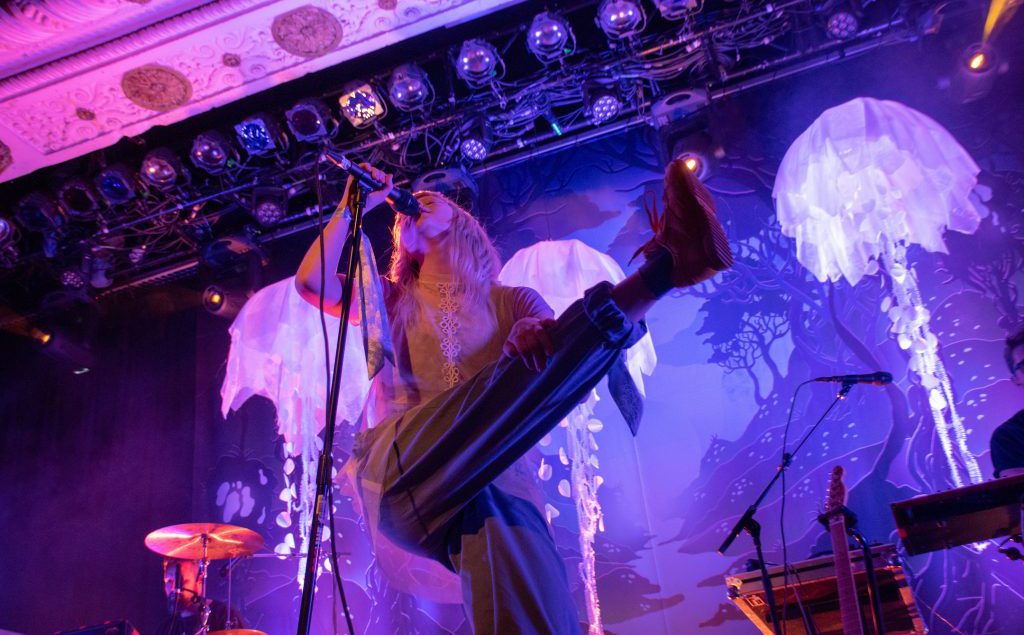 AURORA’s set looked like the dark, yet beautiful forest in a fairytale.  The surrealism of the hazy purple mountains, trees, and clouds was completed by the three floating jellyfish-like entities in front of it, which would pulsate in different colors to the beat of her music.  At once whimsical and otherworldly, the set mimicked AURORA herself, who was in many ways the fairy who completed her fairytale set. After discarding her shoes and socks after only the second song of her set, she seemed to float across the stage. 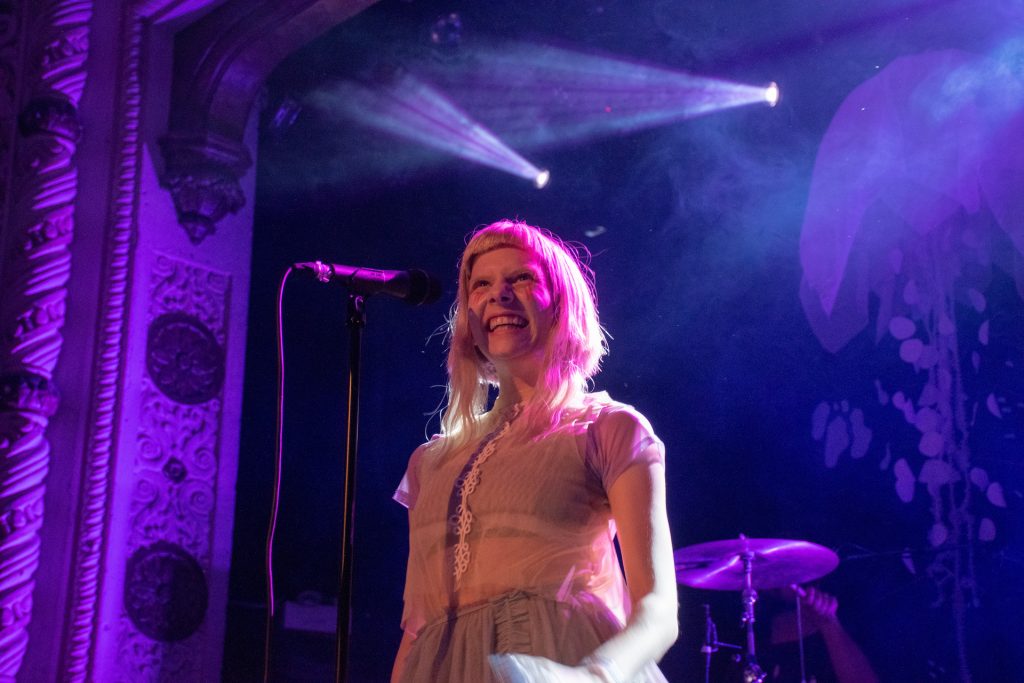 The energy of AURORA’s crowd was like nothing I have ever seen. They sang every single word to every single song, from the moment she walked onstage to the haunting “Churchyard” to the last notes of her closer, “Queendom”. AURORA’s show was truly for everyone.  Everyone fit in, from the middle-aged man with a “Running With the Wolves” tattoo on the back of his neck to the two women wearing kimonos and faces adorned with sparkling rhinestones to the dozens of fans who had painted red lines on their faces to mimic AURORA’s latest album cover, and her own stage makeup.

My favorite fan interaction, however, came after the show. I went across the street to Wrigleyville to get some french fries, and a family of 4 sat down right next to me. The mom told me that, for her 4- and 6-year-old daughters, AURORA was their first concert ever. Her four year old had discovered AURORA while messing around with YouTube suggested on her mom’s phone, and after copious late night dance parties, they decided to go to the concert.  The dad told me how the 6-year-old had refused to sit in a chair when the security guard offered, and instead danced the whole entire show. This 6-year-old girl was a microcosm of an incredibly diverse audience in terms of age, race, and gender, that packed the Metro and created a palpable aura of excitement that was present the entire set. 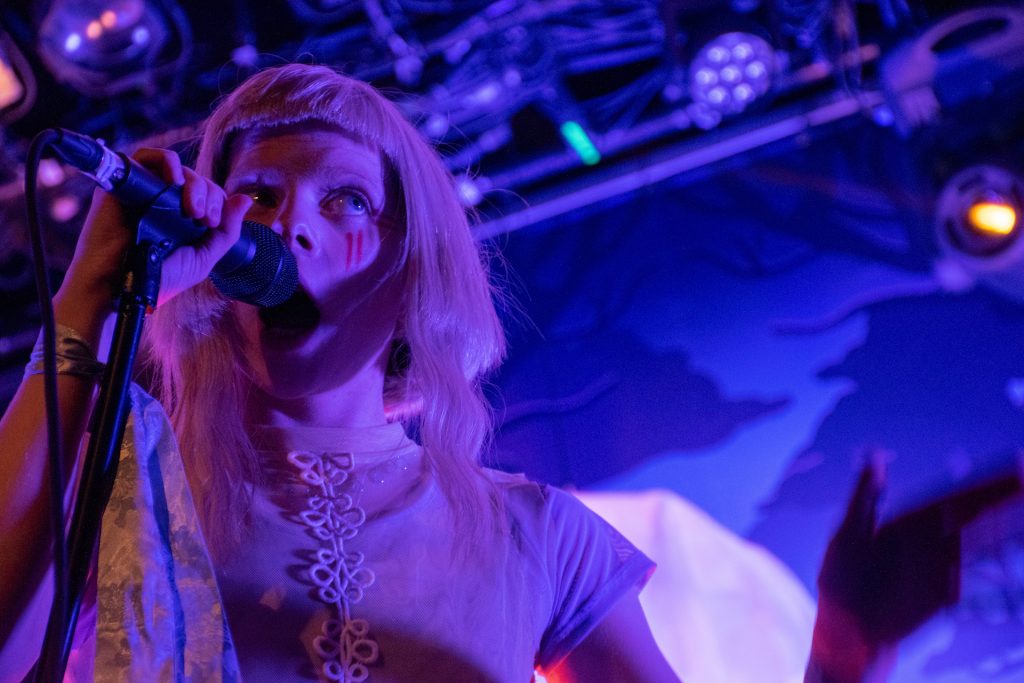 The dichotomy between AURORA’s singing and speaking presence was extreme.  While singing, she seemed perfectly at home in her fairytale world, moving to her own rhythm, and kicking, spinning, punching, and gyrating to her heart’s content.  There was not a moment during a song when AURORA was not moving, and when she stopped the quiet and stillness was all the more notable. In a soft-spoken tone of voice between songs, she spoke to the audience about her music, about a bug she once found in her hair, about the ramen she ate before her show, and seemingly anything that came to her mind.  At one point she addressed a fan in the crowd, who three years earlier had asked her at a show if she’d ever tried Chipotle.

As a Norwegian artist who hadn’t spent much time in the states, she hadn’t tried Chipotle, but had promised him she would. Upon seeing him in line for the show earlier in the day, she immediately recognized him and had to unfortunately inform him that she had not tried Chipotle yet.  Recognizing a fan she had said a few words to three years earlier, and remembering their exact conversation, did not seem remarkable to AURORA; she had many such anecdotes, and it seemed as if to her each of these moments were precious things. 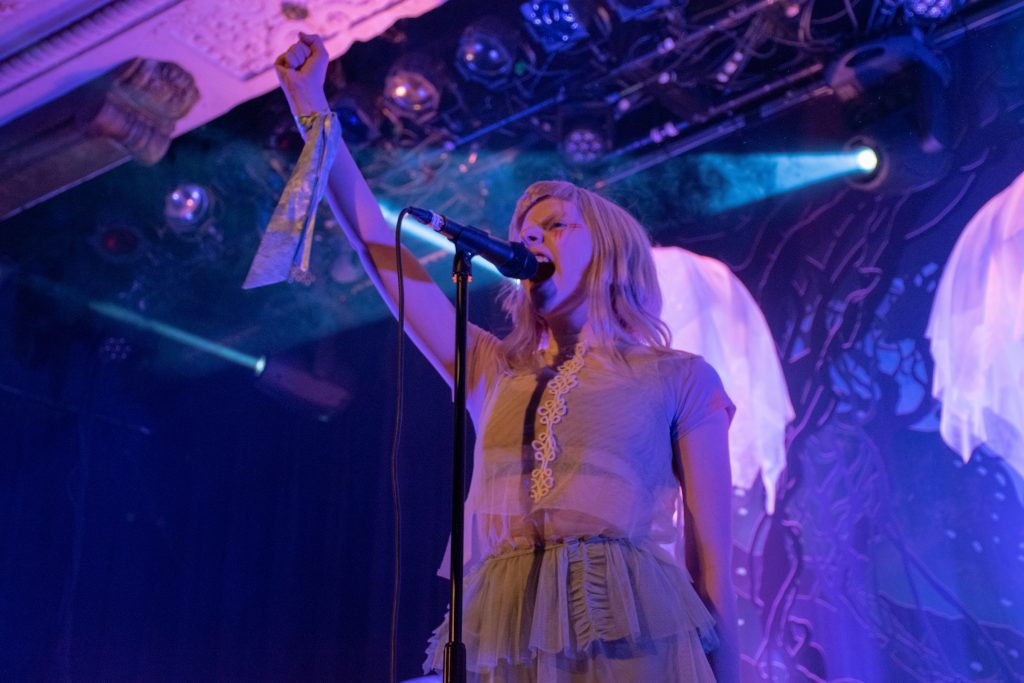 After a moment like this, I could see why her fans were so enamored by her. A favorite moment of the set was when she sang “Runaway”, a song she wrote when she was only 12 years old.  A girl next to me started crying during the song, and I could not help but feel moved as well. Although AURORA’s set was 14 songs, which is lengthier than most artists, as she finished her set with Queendom I did not want it to end. I had come into the concert thinking her sound was cool and her lyrics were interesting, and not having much else to say about her. I left as a member of her Queendom; in a few short hours, I understood the worshipful attitude every single fan in the room held towards her, and shared it.  If you can make it to an AURORA show at any point, I could not recommend her more. Her lyrical genius truly shines in songs like “Murder Song (5,4,3,2,1)” and “Infections of a Different Kind”, you will not be able to stop dancing when listening to “Running With The Wolves” and “Warrior”, and you will not be able to stop smiling as she holds full on conversations with audience members. AURORA’s show was not just a concert, but an immersive experience in her fairytale Queendom.