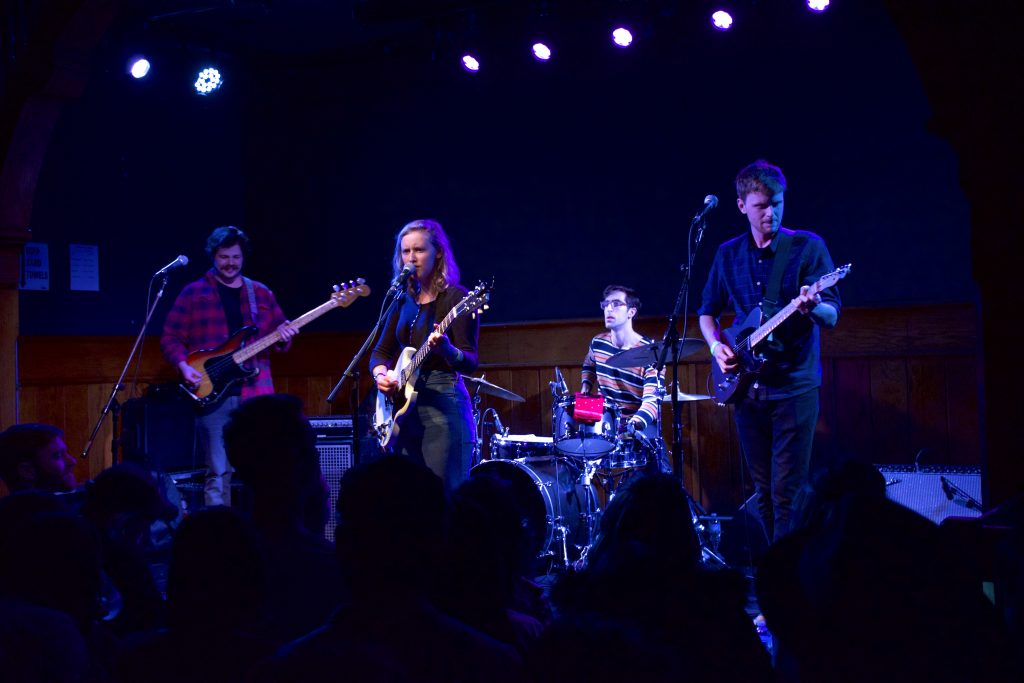 “Anything you love will eventually become a Speedway,” Kerry Alexander, the lead singer of Bad Bad Hats, concluded before strumming the beginning of “Super America,” an ode to a Minnesota gas station chain. With stories of eating sandwich wrappers in Paris, phones left on the tops of mountains, and five-course soup meals, Kerry Alexander caught the attention of every member in the crowd at Schubas late Wednesday night. Her band, Bad Bad Hats, was playing in the Tomorrow Never Knows fest (TNK fest) that Lincoln Hall and Schubas have been putting on since 2005. 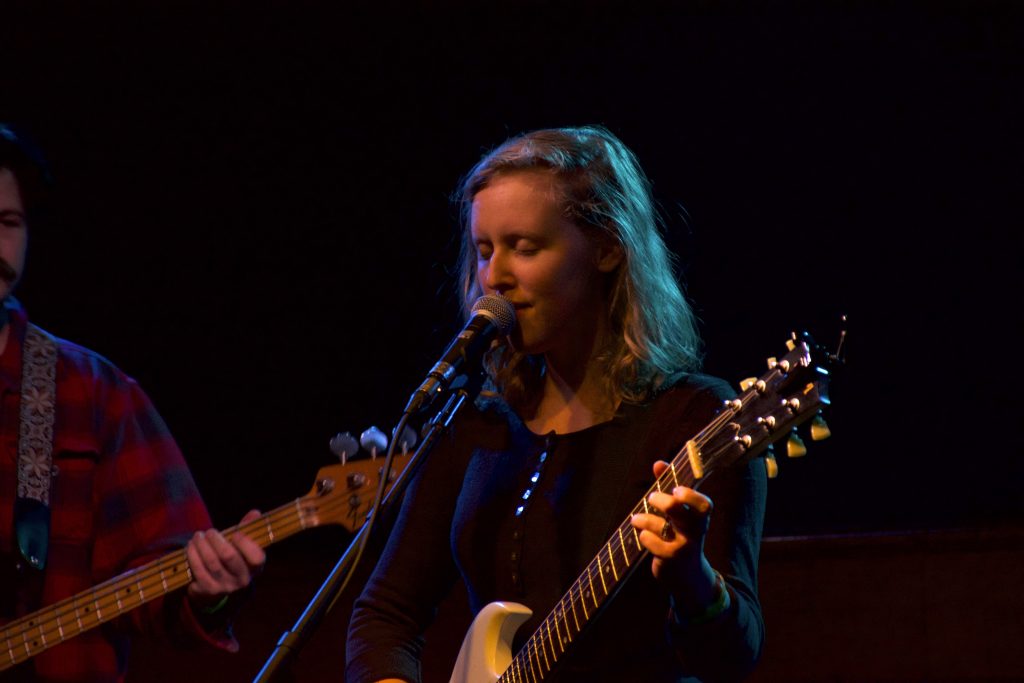 In their boot-cut jeans and casual flannel shirts, Bad Bad Hats looked like Gap personified. They didn’t walk out with beaming smiles, but instead held deadpan expressions until they started playing. Their humble appearance gave the impression that they cared, but not too much, and that they were there to have fun which amplified their unexpectedly comedy-filled performance.

They chose to open with “Talk With Your Hands,” a song from their most recent release Lightning Rounds. Released in August of 2018, it’s their second full-length album and explores unrequited love, intense vulnerability, and the melancholy that life seems to develop with age. 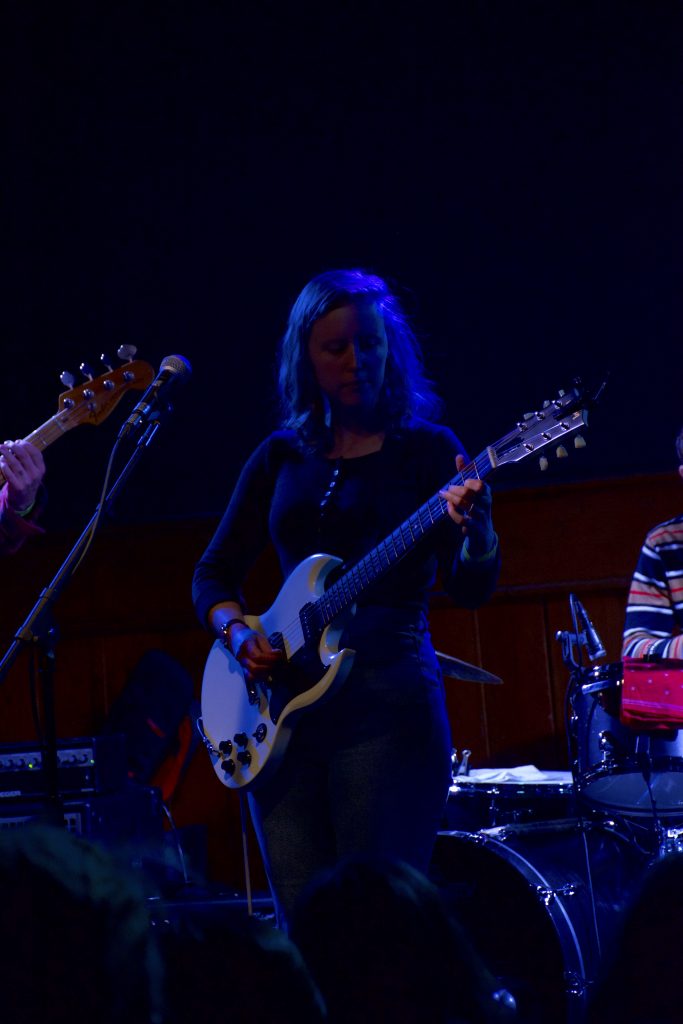 Bad Bad Hats started in 2012, at Macalester University in St. Paul, Minnesota, when Kerry Alexander, the lead vocalist, and Chris Hoge, lead instrumentalist of the group, found each others’ demos on MySpace. The band, now with Connor Davison on drums, makes acoustic heavy indie pop tunes with occasional riffs that pay homage to garage rock. What makes Bad Bad Hats stand out over the other rising indie pop bands is their lyrics. Alexander’s lyrics are quippy and cutting, but they are cleverly disguised by the upbeat “cuteness” of the pop music she produces. 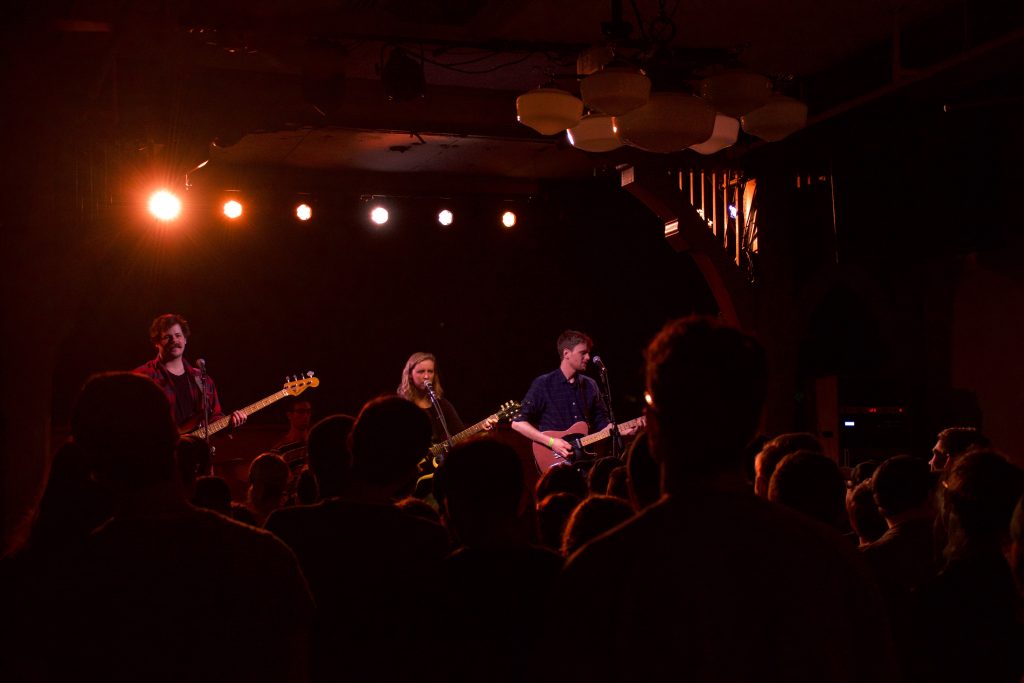 During the show, one of the many transitions Alexander used between songs was a story about Tove Lo’s “Habits (Stay High).” Alexander, in her poignant soprano voice, explained that she gets a lot of her lyrical ideas from listening to one of Minneapolis’ pop radio stations. She asked if anyone in the audience had heard of the song “Habits” and then proceeded to sing it. After that brief interlude, she explained that it gave her the idea to write a song about how she had never been high. This led the band into playing “Nothing Gets Me High,” one of their catchier songs about how love loses its allure when you’re older. It was stories like these, both funny and engaging, that made Bad Bad Hats’ performance so enjoyable. Watching the band goof off with one another, leaning on each other’s backs during guitar solos or holding up a muscle flex at the end of a song, was refreshing because it made it seem like they were genuinely enjoying themselves.

After playing through their entire new release, with some old favorites thrown in, Bad Bad Hats ended the night with a cover of Josie and the Pussycats’ “Pretend to Be Nice.” The crowd, who had been getting rowdier and rowdier as the night progressed, yelled and jumped around, echoing the chorus back to the band. It was the perfect way for Bad Bad Hats to close out their fun and lighthearted set.