Battles, the two-piece experimental rock group from New York City, took the stage at Lincoln Hall in Chicago on December 10, 2019. When I entered the stage area from the bar, I could hardly get in the door. My photographer and I had to push through a mass of math rockers to get even a couple feet in the door. Guitarist Ian Williams and drummer John Stanier were already on stage when we arrived, perched atop a sea of Chicagoans. Williams and Stanier were pretty static in their positions on stage, yet were energetic and seemed excited to perform. Stanier was wild on the drums, producing the beats that are so salient in their music. He was entertaining to watch, with a high hat that was indeed high, about two feet over his head. Williams seemed more focused on his keyboard, yet would occasionally flip his guitar around from behind his back and come up for air. Neither said much throughout the show, except for a singular, “Chicago, hi” and a request from Williams to get his monitor up. Both were dressed in button-downs and khakis, embracing the office dad aesthetic wholeheartedly, yet the music they were making was anything but boring.

Despite being an only two-person group, they produce a complex, unique sound — repetitive yet highly meticulous, with endless layers of rhythms and melodies. When listening to Battles, there are 1000 different things you could focus on to dance to, and you would still be on beat with every one (until they switch time signatures in the middle of a song, which frequently occurs and makes the music that much more entertaining).

There were no live vocals, and the pre-recorded guitar and vocal samples combined with live drums, guitar, and keyboard creates an absolute sonic vortex of sound that filled the whole hall. The intensity of the music is super high, and I expected a raging mosh pit or at least some jumping and shoving, but the crowd was 90% still. Despite being a packed room, everyone had their own personal space. Maybe the crowd wasn’t into it (which I can’t imagine being the case), or maybe they were just in deep scholarly contemplation over the complexities in the structure of Battles’ post rock-y sound. Maybe there just weren’t enough drugs and alcohol involved. 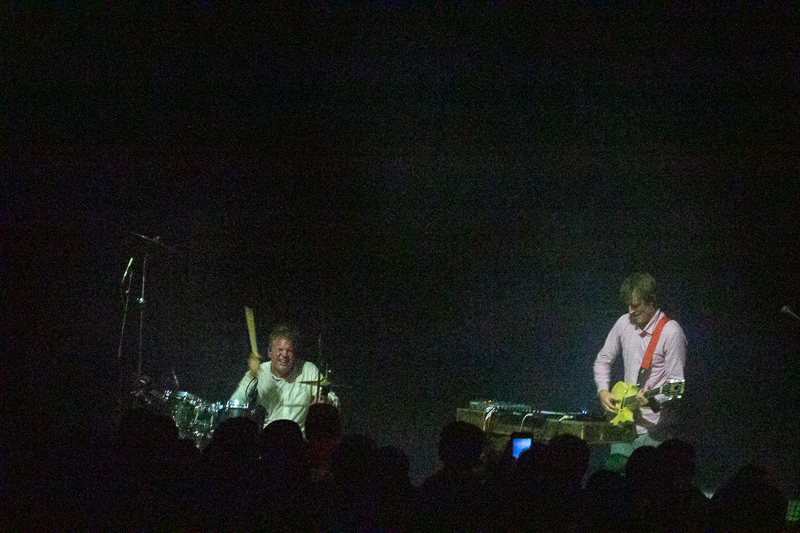 They finished an all too-short set with “Ambulance,” the first song of their most recent album, Juice B Crypts, which was released in October of 2019. Despite the stagnant crowd, I had an absolute blast throughout the whole hour — there was never a dull moment. The music, combined with the always phenomenal lights at Lincoln Hall, made for a stunning visual and auditory experience. I look forward to seeing them again, but maybe with an audience that wants to dance!