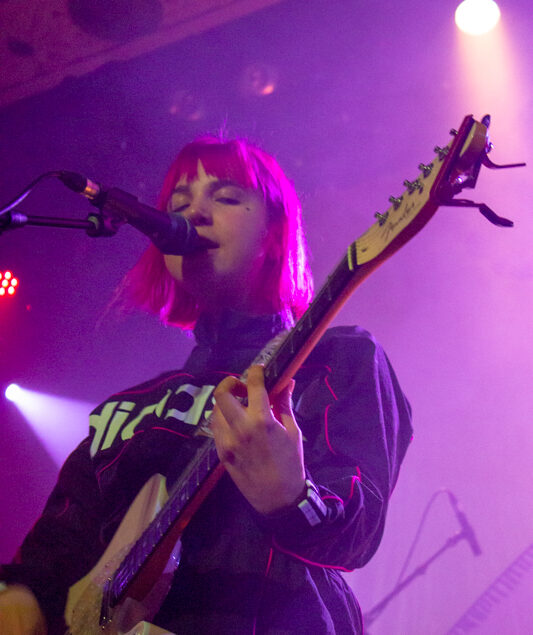 Chicago-based band Beach Bunny put on a powerhouse hometown show at the Metro just a week after dropping their debut album, Honeymoon. Their latest release is quickly sending the band on the fast-track to becoming the next big thing as they continue to gain listeners and win acclaim from big name publications, making for an insane celebration of a concert.

The power-pop band kicked off the night with “Promises,” the first song off of their newest album, as the stage lit up neon pink. The band broke the set in two with the interlude “Goodbye Summer” from the band’s first EP Prom Queen, playing Honeymoon straight through — with the exception of “Racetrack” — before jumping into their older hits. Lili Trifilio, the front-person and personification of Beach Bunny, kept the energy high, saying, “We put out an album last week, so we’re going to keep playing that — banger to banger!”

An upbeat pity party, Trifilio’s vulnerable songs are filled with lyrics of heartbreak and self-doubt accompanied by sunny, racing melodies. The band played to a crazy-cult crowd; although Honeymoon was put out only a week before the show, the audience easily sang along to all the lyrics, dancing and thrashing with the ups and downs of the beat. I watched people in front of me crowd surfing song after song, and people beside me singing and jumping around all the way in the back of the venue by the bar. Trifilio continued to up the ante, saying, “If everyone could go crazy mode in the mosh pit, that’d be sick,” right before rocking straight into “Miss California.”

I’ve never been to a Beach Bunny show before, so I didn’t exactly expect moshing based on their sound. After seeing them live and re-listening, I definitely feel like I understand their pink-punk vision better. As the set moved into one of their biggest hit songs, “Sports,” Trifilio rallied the crowd by saying “Three more songs left — it’s a triple threat, so if you’ve been waiting to punch someone, this is your time!” I can honestly say that’s the first time I’ve really been ready to throw a punch, and at that moment, I finally understood moshing.

The crowd at their hometown show was the most supportive audience I’ve ever seen. They ended the night with the song “Painkiller,” asking the audience to do the infamous wall of death where concertgoers split into two halves before slamming into each other. Although the audience definitely listened to Lili and threw down, there was still an indescribable, sweetly amiable feeling in the air all night.

It seriously feels that no one just likes Beach Bunny — everyone I encounter that listens to Beach Bunny absolutely loves their music and likely has some sort of tender adoration for Lili. As the band heads toward the next stage of their career, it felt as if all of Chicago was rooting for the local band’s success story that night.

Catch them on tour and stream Honeymoon!