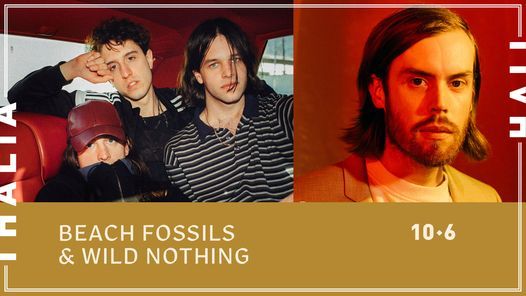 This concert was a long time in the making. When Beach Fossils and Wild Nothing first announced their joint “Out in the Way” tour (named after their song on Beach Fossils’ 2011 debut EP What a Pleasure), the date was January 7. 2020. Yes, that 2020. The 2020 that disrupted the lives of every person on the planet, forced us into our bedrooms and fundamentally changed the world forever. More catastrophically, the 2020 that caused the Beach Fossils and Wild Nothing tour to be delayed for nearly a year and a half. As those who bought tickets to their previously cancelled shows in May and December of last year had theirs transferred to tonight, nearly everyone in the sold out Thalia Hall had been waiting for this night for a very long time. Did the trio of acts led by Dustin Payseur, Jack Tatum and Hannah Jadagu make it all worth it? Abso-fucking-lutely.

The night opened with the latter, a 19-year-old bedroom pop singer from Mesquite, Texas who was very clearly operating at an artistic level way above that of her peers. The Sub Pop signee delivered on her label’s standard of excellence by impressing the crowd with songs that felt like something they’d heard before yet carried a distinct new energy that made them 10 times better. One of them, a cover of M.I.A’s “Paper Planes” that gave life to a crowd surely perturbed by the long trek to the venue, quite literally fit this description. Jadagu mostly played through her new EP, What Is Going On?, a collection of songs released in April that garnered an 8/10 from Velvet Independent, with my personal favorite being “Think Too Much.”

She closed her set with a song that came out the day before, yet the way the crowd reacted you’d think it was her magnum opus. “All My Time Is Wasted” served as the epitome of Jadagu’s sound, as she seamlessly transitioned from deep, personal vocals to headbanging instrumentals highlighted by hammering drums and gliding, Kevin Shields-esque guitars. Moving to New York City for college last year and deciding to simultaneously pursue a music career, Jadagu followed a path similar to that of a lot of college students hoping that their angst from a difficult calculus exam will inspire them to make their answer to Is This It. However, Jadagu differs in that she is immensely talented, and definitely has the presence and energy necessary to make a name for herself in the scene for a very long time.

As Wild Nothing took the stage to the instrumental littered throughout his sophomore album Nocturne, we knew we were getting some vintage Jack Tatum at Thalia Hall that night. I saw the band along with Men I Trust at the same venue in 2018, and I was honestly a bit underwhelmed by the setlist and stage presence, as the songs from their most recent project at the time kind of meshed together to form this hazy, drowsy blur. So, this time around, I was fearful that I would see more of the same.

However, I couldn’t have been more wrong. They kicked things off with “Summer Holiday,” a rush of a song from Gemini (2010) that features every instrument at full speed, and the crowd was amped, fully jolted awake after a lengthy intermission. After slowing it down a bit with “Counting Days,” a groovy, airy track from Nocturne with some banging drums that are sure to make you nod along to the beat, they were back into the thick of it. As Tatum crooned “Lilac, I wish you well…,” everyone was shouting at the top of their lungs, and not a single pair of feet in the venue weren’t at the very least tapping joyously. The first three songs had me ecstatic – the set could have ended there and I would have been more than pleased – and I was far from the only one. One fan a few rows back from me even begged Jack to take his girlfriend after he expressed his love for the crowd’s energy, to which he had to let us know that the love simply “isn’t like that.”

Maybe the crowd might have been a bit too amped up, so the band dimmed the lights and changed the pace with “Through the Grass,” a haunting gem from Nocturnal that’s a true callback to Gemini, as Tatum’s bellowing “I’ll never let you go…I want you” gave way to a cacophony of layered guitars and drums. It was the perfect opportunity to catch your breath and just take in some good music for a bit, as the opening riff of “Only Heather” turned it up to 11 yet again. Probably the highlight of the night, every soul in the room came together in unison to announce that “only Heather can make me feel this way,” a feeling that, for me, is equivalent to jamming along with your best friends at a basement house show freshman year. Pure, unbridled joy.

The rest of Wild Nothing’s approximately hour-fifteen minute set was a mix of some old stuff, some new stuff and some stuff in between. All of it, however, was perfect for the Chicago crowd, as they were way more invested this time around compared to three years ago. A lot of that newfound energy has to be attributed to Tatum, who seemed like a brand new person. Gone was the long hair and too-cool-to-groove attitude that was on display in 2018, and in was the frontman that played his songs like they were all brand new. The essence of “in the pocket,” as his head bobbed, feet tapped and hips swayed, ours did too.

The last act of the night trotted out on the stage to a roar of applause while a trap remix of the iOS ringtone blasted over the speakers. Sounds about right for the diner obsessed trio from Brooklyn. Beach Fossils was here and ready to put on a show, one that they almost had to cancel due to frontman Dustin Payseur’s lost voice. The past three nights of shows after a year and a half break from touring must’ve put some wear and tear on the North Carolinian’s vocal cords, as he woke up and could barely talk. However, as Chicago is a city near and dear to the band, the show had to go on. When the band broke out the first single from 2017’s Somersault, “This Year,” you could hardly tell that he wasn’t in full form. As he sang that “This year I told myself it’d be a better one / Trying not to fall back onto the knife,” you couldn’t help but think on how shitty the past year has been and how close we as a society have nearly come to full blown chaos. After all, there haven’t been any Beach Fossils shows in nearly two years, who would want to live in such a world? So, the opening track truly set the tone, as the band reminded us to look to the future, kick back and enjoy the show.

While a bit of a hiccup in the form of forgetting the words to “Sugar” took place immediately after, the band made it up to us by rolling out a song from What a Pleasure that hadn’t been played live in years despite being a fan favorite. “Fall Right In,” a song that has been in rotation for many a fall afternoon drive, lulled the Thalia crowd into a hazy spell, but one that was quite deceiving however, as the titular “What a Pleasure” sent everyone into a full frenzy. We hit full moshing status, something that I did not expect this early and especially for this song, as I usually play this song on sunny days when I’m relaxing in my hammock, not when I’m getting ready to lose my mind and push around a bunch of other restless, sweaty adults. Even Dustin was a bit surprised, as following the track he said that he “wasn’t sure if people were gonna mosh on this tour,” but social distancing was a concept that didn’t really register with the crowd that night. “What a Pleasure” set the stage for the rest of the set, as even though the crowd might not have moshed for every single song, they definitely came ready to vibe out with the boys from Brooklyn.

Read more about Beach Fossils’ favorite diners in WNUR’s 2018 profile of the band.