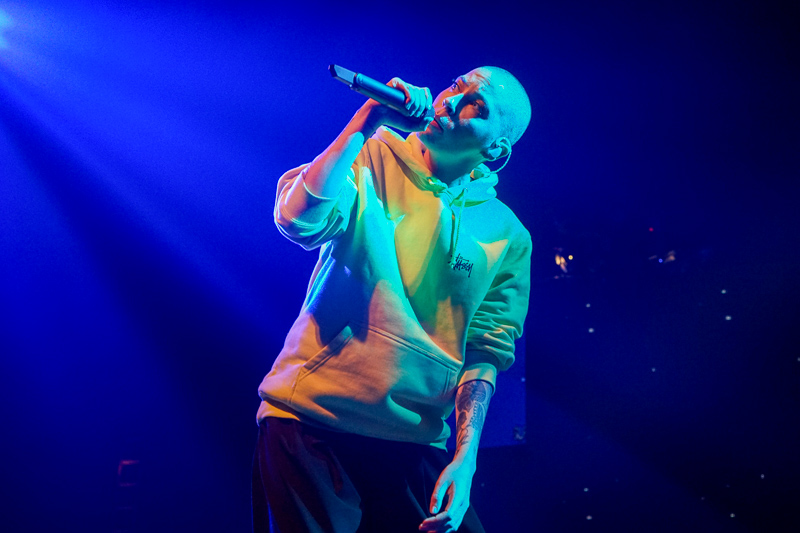 In the middle of Bishop Briggs’ set, she stopped to emotionally talk about how empowering its been for her to be able to have two female headliners on tour, and the importance of representation within the industry.

The first of these female openers was Jax Anderson, who came out dancing in a yellow beanie and retro looking bowling shoes. She seemed not to care that the crowd didn’t know her music enough to sing along, and somehow by the end of her performance had the entire audience wrapped around her finger. When she told the crowd to jump, they jumped. When she told them to clap, they clapped. At one point, she got the entire audience to go down to the ground, a feat some headliners I’ve seen have not been able to accomplish. Her voice is pure and melodic and her music is fun and lively, but what really defined Jax Anderson was her stage presence. At one point, she yelled to the crowd, “If you’ve seen me before you know I want loud — not pretty. Now scream!” before starting a call and response of “alright alright” and launching into her song “Monster.”  Her energy was so contagious that it felt as if I, and everyone around me, could not prevent ourselves from dancing along with her. I can’t wait to see her when she’s back in Chicago in February for her own show at Schubas.

In contrast, Miya Folick’s set was slow, and at times felt lackluster. Her voice is beautiful, raw, and powerful with a ridiculous range — but most of her songs sounded the same, and blended together in my mind. She was fairly low energy on stage, and sounded incredibly nervous when speaking and attempting to transition between songs. Compared to Jax Anderson, she had little crowd engagement — the most that people could do was sway to her songs, with a few people clapping along. I really like her recorded music, but was left disappointed by her stage presence during her set. The only song I genuinely enjoyed live was “Freak Out,” off of her latest album, Premonitions, where she seemed to find the energy that the rest of her set was missing.

The first time I saw Bishop Briggs was in May of 2018 on her Church of Scars tour. I was blown away by her sheer love for music, her vocal control, and the ability she has to make you feel every emotion in her words. Seeing her for a second time, I was even more impressed. Bishop Briggs puts on a show that I could never get sick of. After a short film intro, Bishop Briggs strutted out to “Champion” in a yellow stüssy sweatshirt, black wide-legged pants, and matching yellow sneakers.

Though the crowd was much older than I anticipated, with a balcony entirely filled with people middle-aged and older, as Bishop came out everyone went crazy. That Bishop could make both the 15 year old braces-wearing girl standing in front of me and her mom dance to every song speaks to her immense talent and stage presence. She played both old songs and new releases from Champion, which dropped on November 8, transitioning effortlessly from upbeat songs like “Be Your Love” to “Jekyll And Hyde,” which she described as a “creepy anthem for all the fuckboys out there.”

Her vocals switched from powerful to light and airy to sultry and gritty in an instant, leaving me awestruck. A favorite moment of the set was her blistering rendition of a compilation of “Stressed Out” by Twenty One Pilots, “I Write Sins Not Tragedies” by Panic! At the Disco, and “Welcome to the Black Parade” by My Chemical Romance. Right after this, she moved into a heart wrenching acoustic version of “Dream.” She closed her main set with “Baby,” but came back on to sing “My Shine” — which she wrote with her friend and opener Miya Folick’s girlfriend, K-Flay — and “River.” My only complaint was that she did not play “Tempt my Trouble” or “The Way I Do”, two of my personal favorites. Even though it was my second time seeing Bishop Briggs, the show was just as magical as the first time around. Though her set was long, I felt like I could have stayed there listening forever.