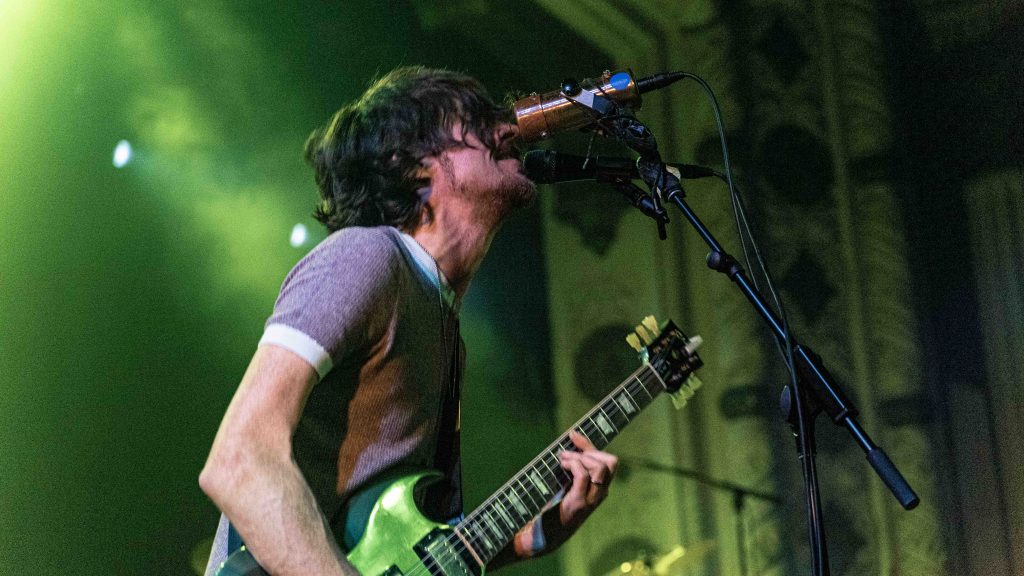 Saturday night at Metro… I have a creeping feeling that’ll be the start of half of my dusty old fart nostalgic stories. Always a great time, this one no different. The crowd was packed in tight, butting right up against the naked stage (no press pit :/), doing what they could to prepare themselves for the hot piss and vinegar slinging act named Black Pistol Fire. I’ve seen these two feral cats play live twice before and, speaking from experience, I was personally worried for people standing within spitting distance of the stage.

Austin-based shredtress Emily Wolfe took the stage to open and wasted no time in establishing her dominance. Her powerful voice brought us to our knees as she liquefied and displaced our facial skin with her kerosene-soaked guitar licks. She took us on a journey, hitting airy, soaring highs before slowing down time to a near-crawl and diving into deliciously rudimentary, drawn out palm-muted sections. Emily is a solo musician, but was touring with a drummer and bass player, who kept up. The trio played tightly together, but it was no mystery who the star of the show was.

My one and only gripe, aside from the ridiculously over-the-top lighting, was that her methodical, calculated stage presence stood in contrast to her greasy, gritty, offensive style of playing. At times, it seemed like she hid behind her wall of dark hair. She moved around the stage like someone with sunburns on the bottom of their feet—gingerly, if at all. I know it’s about the music, not the flair, and Emily’s music does more than enough to counter-balance this, but at the same time, I felt like screaming, “Hey, move around a little!” Her concision of movement could, in part, be blamed on the megalithic drum set that lay waiting for Eric Owen’s impending beatdown, which took up nearly a third of the large stage.

She closed her set with a speedy cover of Motörhead’s “Ace of Spades,” which, although paired with those goddamn seizure-inducing lights, was a hit. The crowd ate it up. All of the bullshit nitpicking aside, Emily played a hell of a show and is a musician I’ll keep my eyes and ears on for the foreseeable future. I have a feeling she’ll be kicking it around for quite a while. Listen to her self-titled February release here.

It wouldn’t be a Finn Hewes Metro Article ™ without doing a little dick sucking, so here it is: Metro’s audio is so solid. Every time, without fail. That bald guy with the beard (you know the guy) holds it down night in and night out. The mix is always mwwwah :* perfecto. It’s as loud as it can be without deafening the first three rows. Consider that within the context of an ornately beautiful picture-framed stage and a convenient location in a bustling part of the city, with a sleazy hot dog stand right across the street, its flashing lights a beacon of salvation for the stoned, drunk, and tired post-concert audience, and Metro may be my favorite venue. In Chicago and maybe even of all space-time. But guys, guys, really—you gotta fix those cracked out lights. Just take it easy. Moving on.

As we anxiously waited for Black Pistol Fire to take the stage, the grips frantically raced to batten down the hatches. The cloak was removed from the massive drum kit. I’ve never seen so many sandbags holding down a kick. I’d hate to be Eric Owen’s insoles. Their setup was almost absurd in its grandeur. Kevin McKeown’s literal wall of guitar amps deserve the slowest, most pregnant of cat calls. With 4 Fender beauties strung through various effect pedals and vintage mics, he probably didn’t even need to tap into the venue’s system. But hey, when you’ve got it, you’ve got to flaunt it. These amps were carefully adjusted so as not to interfere with each other—a balancing act no less impressive than those rock towers that yoga people stack up in scenic mountain lake photos seen on corporate desktops, approaching the rock medium in a less literal sense.

BPF took the stage to raucous applause from the mostly mid-30’s crowd. After singing Emily Wolfe’s praises (foreshadowing?) the duo wasted no time, lighting straight into their signature brand of gritty, blues-infused rock n’ roll. Their show reminded me much of the last time I saw them, at the Arlyn Studios Homecoming Party at SXSW, with a few notable exceptions.

Three or four songs in, the entire lighting scheme shifted from a high contrast, dirty feeling rock setup to a plush purple, slowly undulating along to an all-too familiar rhythm. They covered fucking “Redbone”. Who wudda thunk it? It was absolutely genius, and arguably a bolder move than grappling with an etched-in-stone rock classic, alá Wolfe.

Speaking of Wolfe, after another song or two, McKeown called to stage our heroine. I wasn’t prepared in the slightest for what happened next. In a visceral performance, Wolfe shed all aforementioned meekness, engaging McKeown in a sex and sweat-drenched guitar duel-to-the-death that I doubt anyone expected. Dropping to his knees in a humbled bow within reach of the front-row audience before leaping up in a gymnastic backbend that would gave Simone Biles a run for her money, McKeown was forced to up the ante on his already-electrifying stage presence to keep up with Wolfe. Butting heads like rutting rams, the two displayed a chemistry-laced competition not commonly seen on stage. The crowd was astounded. They didn’t know how to handle it. It was almost too much.

“That was nasty, wasn’t it?!” poked McKeown as Wolfe exited stage left, much to the crowd’s dismay. I thought I had seen them play before, but this was all-out performance. Wild. The rest of the show, though nearly impossible to emulate by any other group out there, felt lackluster after this passionate explosion. The boys ripped through a few more before calling it quits.

I sauntered down the stairs and out into the night air not really knowing what to do with myself… Do I shave my head? Call my mom? Join the Peace Corps? What’s next? Upon pondering these questions over a much-needed Camel Blue, I decided the only logical solution was to skip across the street for a greasy dog. A fitting end to yet another ego-death-inducing Saturday night at the Metro.