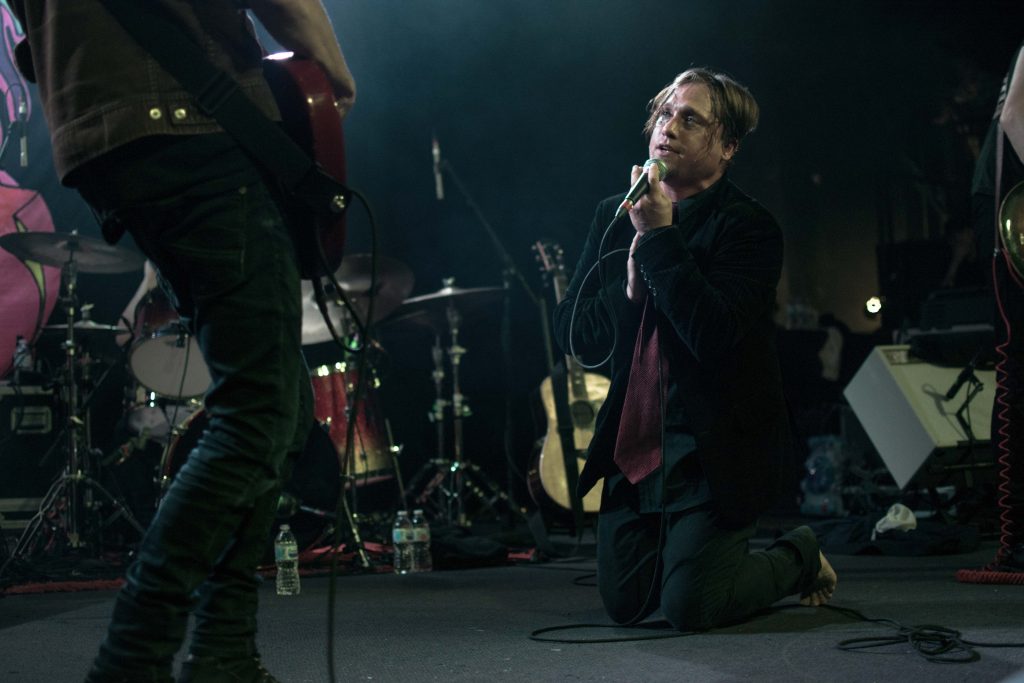 My night at Concord started out on a weird note. I walked into the venue and was messing with the settings on my camera as a group of Henley-clad middle-aged people took the stage. They call themselves the Well Known Strangers. If you like the Rascal Flatts, puka shell necklaces, and Logan’s Steakhouse, then this may be the band for you, in which case you should skip ahead a paragraph or two—because the fauxhawks and diamond studded earrings didn’t distract me from the awful brand of regurgitated country-biker-rock this band played. 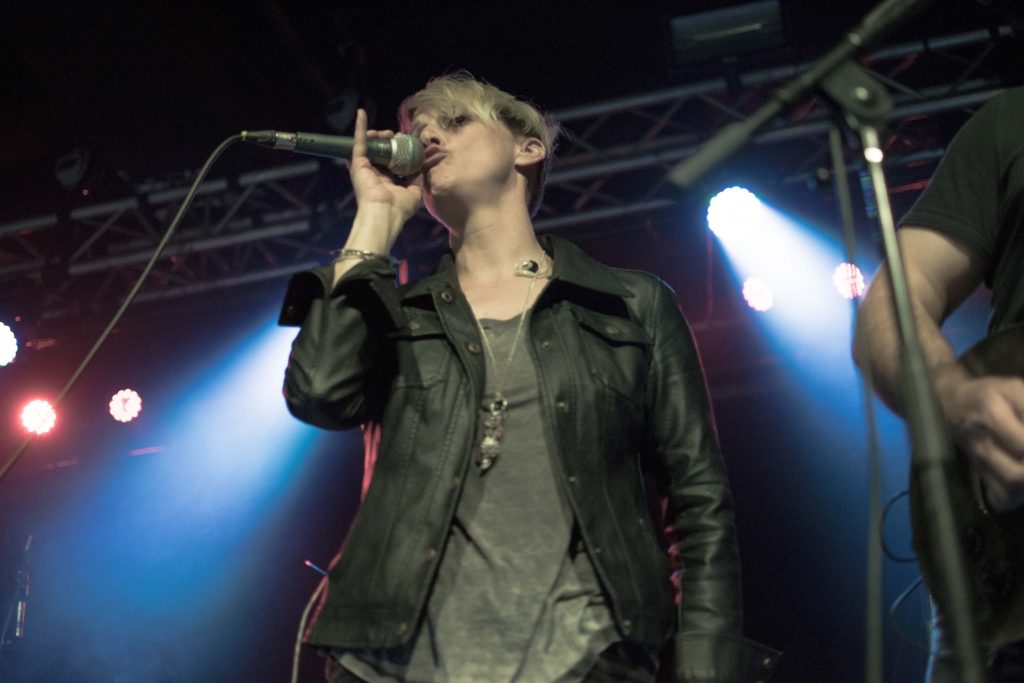 The guitar players looked like someone’s past-their-prime stepdad, and the guys for whom abalone rosettes were invented. I physically felt the skin on my face tighten as I was sucked through a wormhole and transported through the space-time continuum from N Milwaukee St., present day, to the muggy South Mississippi baseball fields I grew up playing on. It’s not that the band was technically bad; they played pretty tightly and utilized an electric cello quite well. However, their music meshed better with the likes of Florida Georgia Line (if you can swallow the fuck-clobbering horse pill that is calling that garbage ‘music’) than 90’s rock legends I came to see. I was quite frankly insulted.

Sometime between the start of the first set and the moment my ears and eyes began to bleed, I made it to Concord’s bathrooms and finally took the time to soak in my surroundings. This was my first visit to Concord. The venue houses four separate bars, polished hardwood floors, and a clean bathroom complete with an attendant handing out paper towels and mints. And besides that, it’s fucking huge. I know you’re probably here to read about the music and not the venue, but damn. This place is nice. A huge step up from the usual grungy bars I shoot in. Let me bask. 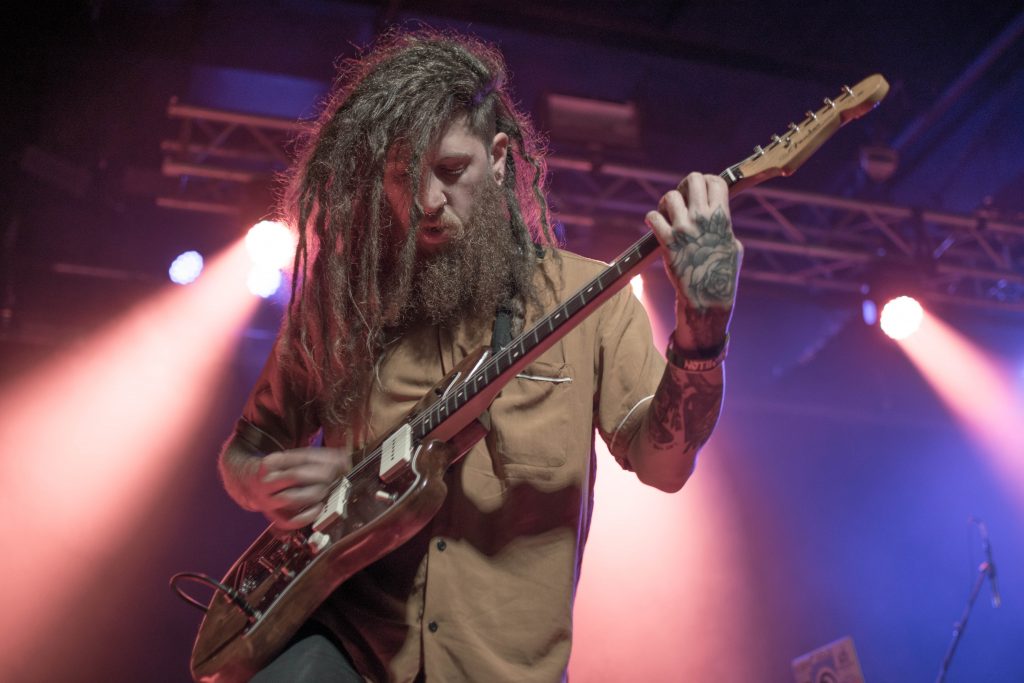 Next to take the stage was the band The Orphan The Poet. I’d heard of these guys before, but written them off as Panic! perpetrators, and hadn’t given them a listen. In reality, they embodied more of a Dance Gavin Dance vibe: a band with whom they’ve toured in the past. They brought a tenacious energy to the stage and clearly knew how to work the crowd. “Let’s do a thing!” lead singer David Eselgroth shouted as he led the crowd in a thunderous rhythmic clapping exercise. Later in the performance, Eselgroth would descend to ground level and interact with fans along the rail as lead guitarist Ty tripped on his pedalboard, fully busting his ass, and continued playing from the ground. The show must go on, I suppose.

After cranking out some originals, the Columbus, Ohio natives demolished a cover of Avril Lavigne’s “Sk8er Boi,” challenging the crowd to a chorus-singing contest, which Eselgroth would later resign from and jokingly beg to rejoin our team. 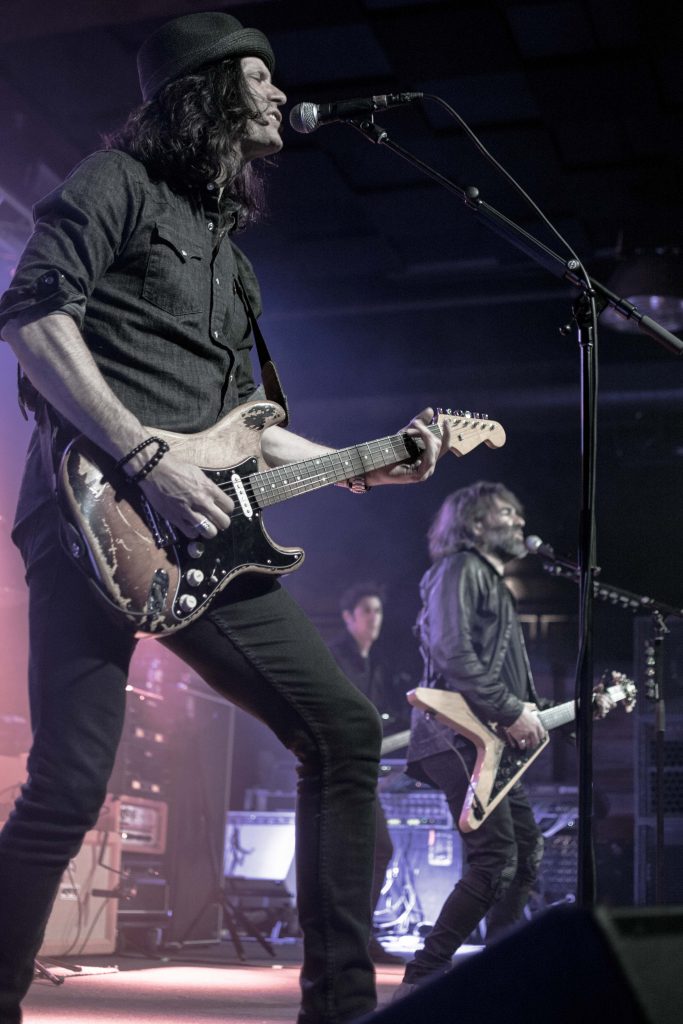 Up next was The Cringe, a New York City band with two SXSW performances under their belts. They were excellent performers and were clearly well-versed in both crowd interactions and classic rock, but that’s about as far as my praise extends. They absolutely crushed a cover of “Ramble On,” nailing the guitar swells and splashy cymbals… But then again, who can’t play Zeppelin? After a few impressive-ish guitar solos, the no-frills band made way for the night’s main attraction: Blind motherfucking Melon.

As the stragglers arrived to fill whatever space remained in Concord, I entered the photo pit, not quite believing the reality presented before me. I made note of the sparse setup on stage: a Gibson LP Custom, a Fender Tele Custom, what looked like a Taylor Grand Auditorium, a custom mic’ed mandolin, a custom… you get it. These guys are the best kind of gearheads. They don’t bring the entire back room of Guitar Center with them, but what they do bring is nice. And very expensive.
As the grips unrolled a giant black light tapestry, I felt a tap on my shoulder and turned around to face the sweetest, oldest woman I’ve ever seen on the rails of a rock show. “Recognize this?” she asked. She gestured to the necklace she was wearing: the very same one that the otherwise naked Shannon Hoon (Blind Melon’s ex-lead singer, who died in 1995) wore on the ’93 cover of Rolling Stone. How could I not recognize that necklace? And how the fuck did she get her hands on it? Turns out she was Shannon Hoon’s mom!!! WTF. 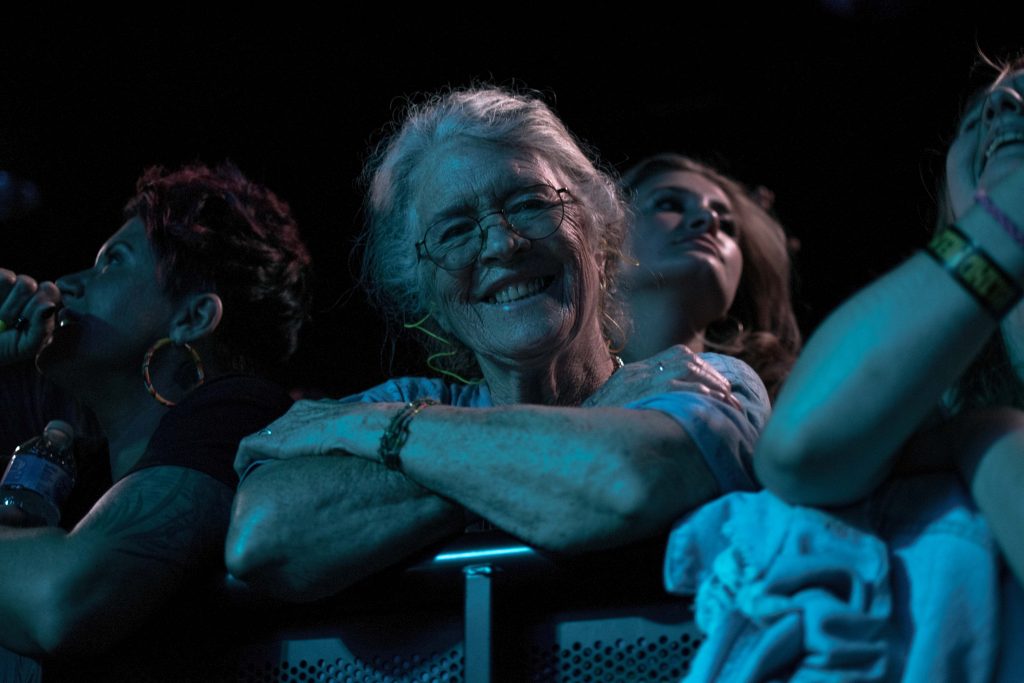 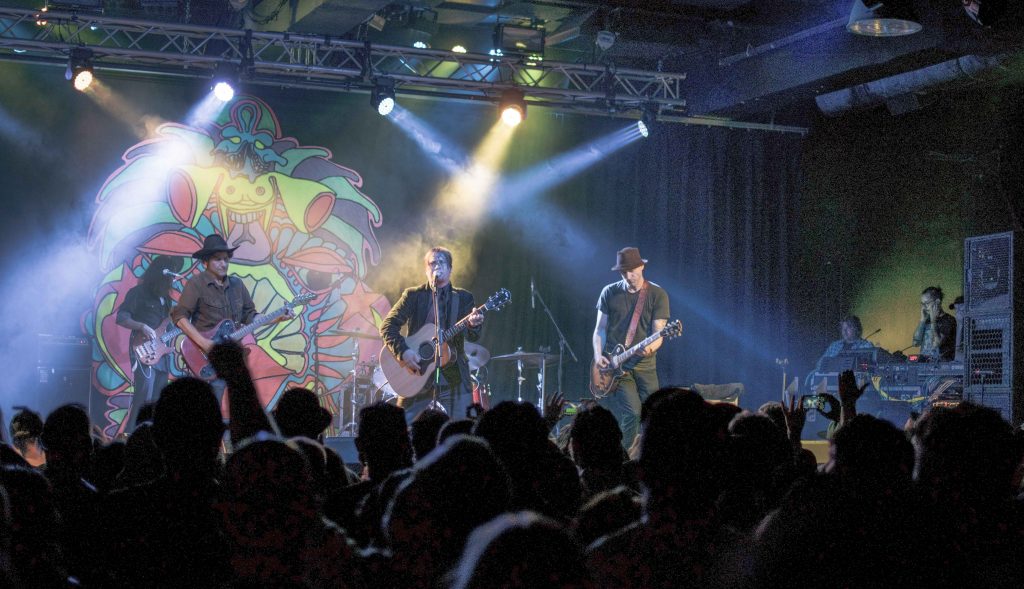 Eighteen of the twenty songs on their set-list came from three of their own albums, spanning the twenty-year gap from 1993 to 2013. The band enveloped themselves and everyone at Concord in their neo-psychedelic, folksy, alt-rock vibes, pioneered in the height of the grunge scene of the 90s. They became so enveloped, in fact, that at one point I clocked a guitar solo at five and a half minutes, prompting a, “whoops, that was kinda long,” from Warren. 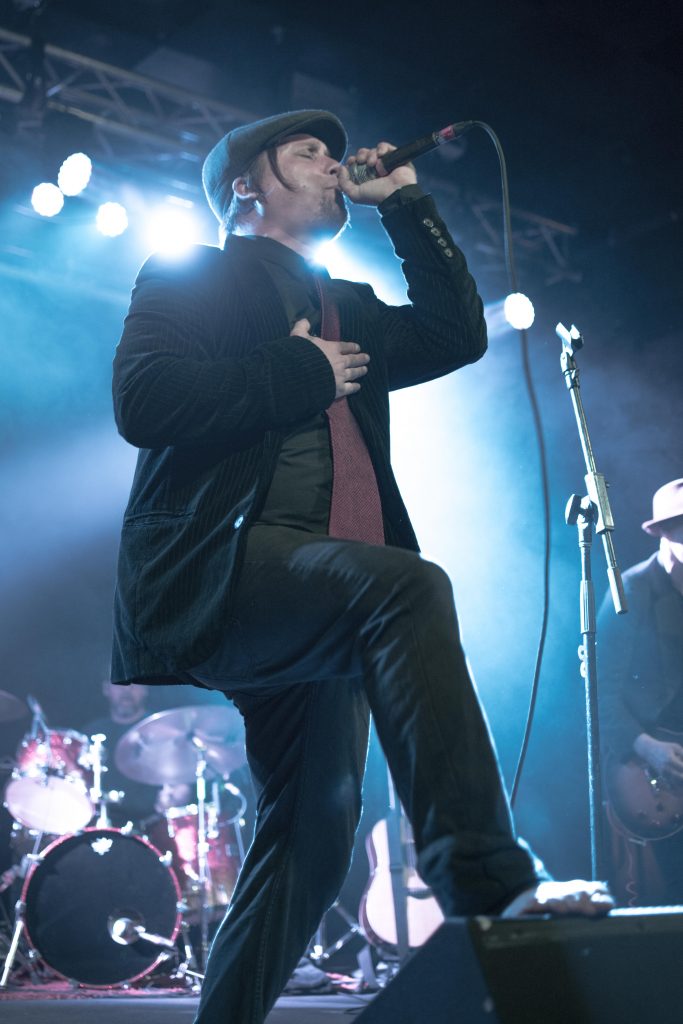 The height of any show put on by a band with a large following is the multifaceted makeup of said following. Think DMB fanatics, Phish Phans, Deadheads… the like. After a long night of receiving high-fives from plastered, dreadlock sporting white guys closer to my dad’s age than my own, a security guard made his way through the shoulder-to-shoulder crowd. A dirty looking forty-something redirected the guard, getting a kid in a jean jacket kicked out for smoking a blunt that was actually his. The scene made me think of old Tom and Jerry cartoons. After giving the guard the “he went that way” routine, the guy turned, laughed, and high-fived me again before producing another blunt from god-knows-where and continuing in his indulgence and gentle moshing.

I may be biased since Blind Melon is one of my favorite bands of all time, but they put on a helluva show. None of the tracks sounded like the studio recordings—something that doesn’t come easily after 25 years of playing the same songs night in and night out. The middle-aged wooks and I had a blast. I bought a twenty-five dollar hat. Poetically, Shannon’s mom’s face lit up every time I made eye contact with her from the pit. The monolithic band, and more importantly Shannon Hoon, can rest easy knowing their legacy is well preserved and his mom made very proud. We all went home happy. 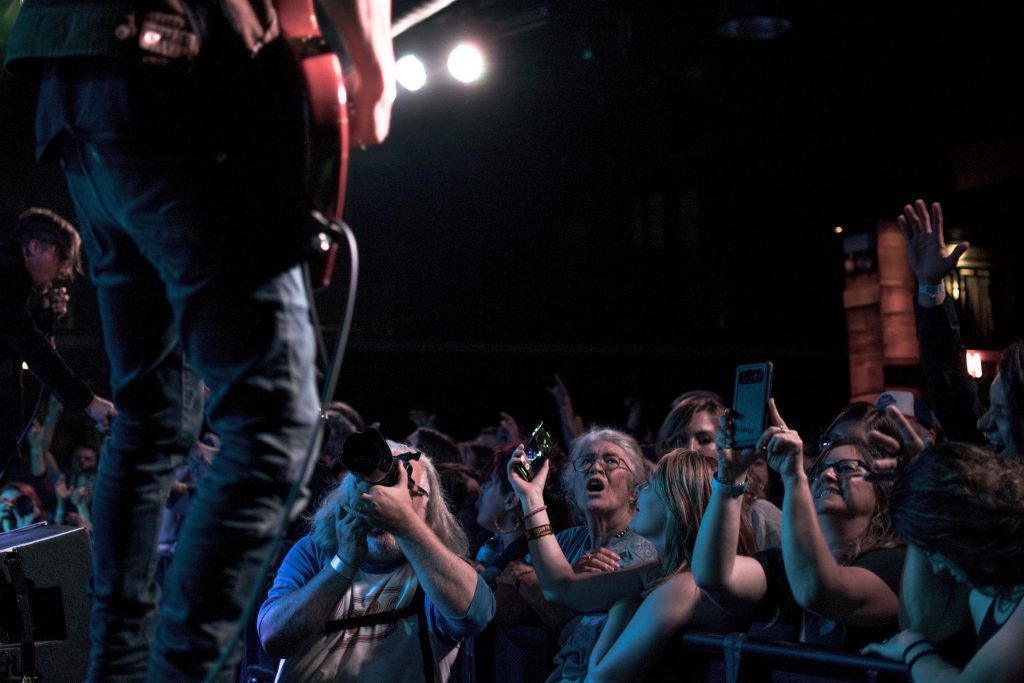