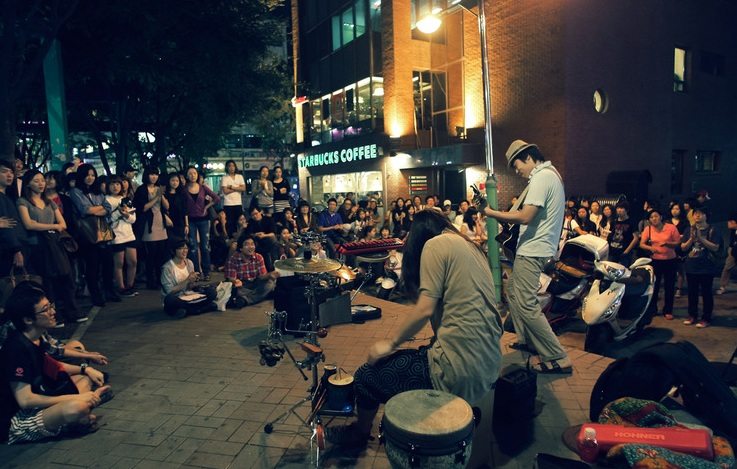 We live in a glorious time when an anonymous singer-songwriter in a Hong-dae club can skyrocket through the charts after a brief media exposure.  ©FIREFLY Guesthouse

This is article was republished from WNUR’s K-Sound. To read more of this show’s content visit K-Sound’s official website.

The Difference Between Indie and Mainstream

[su_quote]”It’s easy to dismiss the Korean music landscape as a never-ending parade of girl groups and boy bands with addicting but forgettable factory-made K-Pop hits…But for every generic K-Pop single and garish music video, there are gems like Akdong Musician’s refreshing duets or Crush’s jazzy sensibility.” — DJ Oh[/su_quote]

More often than not, music consumers seem to point towards the quality of music as the defining factor that differentiates the underground from the mainstream. It’s a notion that has prevailed in most, if not every, music industries around the world: mainstream artists are commercial hacks who churn out unoriginal garbage, while indie musicians — the destitute singer-songwriters living precariously from gig to gig — are the real deal. To many music lovers, this seems to be a straightforward distinction. Huge entertainment companies like YG and SM are homogenizing the Korean music industry. There is no diversity, not to mention originality, in mainstream K-Pop. Korean music industry is dead: only pretty boy bands and sexy girl groups dominate the chart.

The truth is, the line between the underground and the mainstream is becoming more and more blurred in today’s Korean music industry. The billboard charts these days are as diverse as ever — as of writing this article, the Top 100 Melon Chart contains an astounding gamut of genres and subgenres besides the regular K-Pop and ballad hits, including hip-hop, acoustic, country and even trap.

Perhaps ironically, mainstream TV shows and the so-called “idol groups” seem to be responsible for the recent diversification of music styles and popularization of such previously underrepresented genres in the Korean music scene.

Take the variety show Infinite Challenge (무한도전), for example. The show, which is already known in Korea for being innovative with its programming and for pushing the boundaries of social and cultural limits, most recently completed a successful concert that helped propel some of the most talented and versatile musicians into “mainstream” status. Hyukoh Band (혁오밴드), the adorably awkward group of alternative rock prodigies, is currently enjoying a level of fame unmatched by any other indie musicians. If you haven’t heard of Hyukoh’s Wi ing Wi ing (위잉위잉) yet, do yourself a favor and do so right now: it’s a type of music that nobody would have suspected to end up in the Top 20, with its minimal guitar riffs, abstract lyrics and hypnotic vocals characteristic of many indie bands. Even Infinite Challenge’s choice to collaborate with the unconventional jazz vocalist Zion.T — who, in his own right, was already a certified hit with the Korean masses — proves that Korean mainstream entertainment industries are not shy from taking risks with new artists and genres. And in turn, this means that the Korean audience is becoming more and more accepting of new and interesting genres, and are not wed to the safe bets of conventional K-Pop.

Audition programs like Show Me The Money also helped promote hip-hop, which was previously a marginalized genre that only appeared to the public as commercialized addendum to K-Pop singles, into a status of perhaps the most popular and dominant genre in Korea right now. Just a few years back, nobody would have suspected that longtime players in the underground hip-hop scene like Dok2 and Beenzino would be selling out shows and raking in millions in record sales and concert tickets.

And even the commercial, company-backed artists are doing their part in expanding the musical territory for Korean listeners. Big Bang is perhaps a prime example of one of the boundary-pushing, genre-defining artists who create entire new trends and musical tastes. Big Bang has been churning up unique hits that imitate and recreate exotic Western subgenres like trap and dubstep with tracks like “Bang Bang Bang” and “R.O.D.”

All these said, I refuse to promote the notion that the Korean music industry has traditionally been a monotonous and barren landscape of factory-made chart hits, and is only recently taking the turn for the more diverse. Take for example Seo Taiji (서태지)’s groundbreaking introduction of nu metal and heavy metal in the early 90s with hits like “교실 이데아” and “Ultramania,” or the legendary rockstar Shin Hae Chul (신해철)’s experimentation with techno-electronica in the late 90s. Going back even further, artists like Kim Kwang-Seok (김광석) and Yoo Jae-Ha (유재하) pioneered the folk and singer-songwriter culture in Korea with their brilliant songs reminiscent of Bob Dylan and Simon & Garfunkel. This trend of adopting and modifying unfamiliar Western genres and subgenres has been present ever since the beginning of Korean pop music, and continues to this day with various artists pushing the boundary of what can be successful and popular music.

One could call it a gross commercialization of “indie” music talents, and even dismiss artists like Hyukoh, Zion.T and Dok2 as “sellouts” now that they’ve immersed themselves in the dirty waters of mainstream music industry.

But this dangerous hipster mentality gives music listeners a myopic view of what good music is. For me and others in the K-Sound team, Korean indie musicians share the same philosophy as our music show: to promote originality, novelty and excellence in music. What’s often difficult to understand is that these tenets aren’t always exclusive to indie artists.

It’s easy to dismiss the Korean music landscape as a never-ending parade of girl groups and boy bands with addicting but forgettable factory-made K-Pop hits. And to some extent, this is true — as it is with the American music industry, and for that matter, any other music industry around the world. But for every generic K-Pop single and garish music video, there are gems like Akdong Musician’s refreshing duets or Crush’s jazzy sensibility.

It is our mission here at K-Sound to present you, our listeners, with the kind of Korean music that is refreshing and new to listen to. In the beginning, we began our initiative as “Chicago’s Premier Indie Music Show.” But now, with amazingly talented artists putting out chart-topping songs weekly regardless of whether they’re underground or mainstream, we feel no need to be bound by the stereotype that only indie music is authentic music. We live in a glorious time when an anonymous singer-songwriter in a Hong-dae club can skyrocket through the charts after a brief media exposure. The K-Pop charts have never been so diverse, and we’re excited to take you along on this journey in search of your next favorite Korean song.