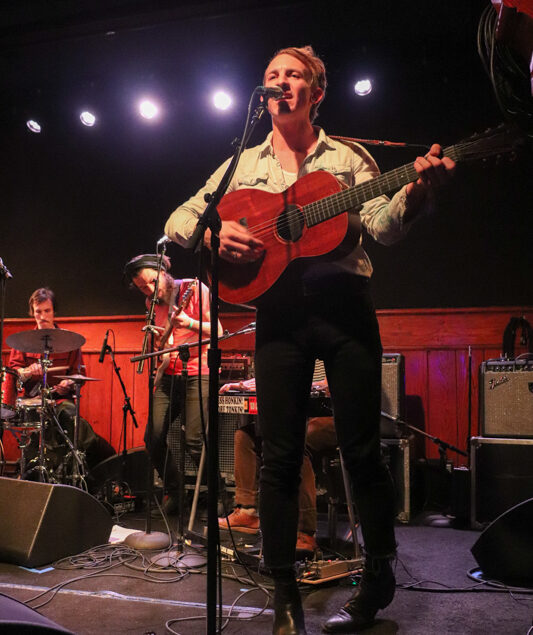 It was a very lowkey Sunday night at Schubas, with Buck Meek headlining the final night of Tomorrow Never Knows (TNK) Fest on the eve of MLK Day. The lead guitarist of indie rock band Big Thief, Buck Meek released his first solo album (self-titled) in 2018, a tight 23-minute collection of 10 songs that incorporated more southern twang and folk influence than most of Big Thief’s catalogue. Meek also has a softer voice and a more choppy singing style when compared to the smooth, melodic singing style of Big Thief lead vocalist Adrianne Lenker. Thankfully for the Big Thief die-hards, of which there are no shortage (some anonymous WNUR staff members recently staked claim to a “Big Thief > Bob Dylan” take), Meek played some tracks he had recorded with just Lenker in 2014.

However, before Buck Meek took his place performing in front of the 200 some-odd people packed into the back room of Schubas Tavern, TNK had scheduled three openers to precede his act, all of whom made at least one joke about the cold weather. A very homey environment indeed, in the dimly-lit wood-paneled setting.

Local act Burr Oak was really solid in warming up the sparse crowd as the first of three openers, and I hope they expand on the two tracks currently available on streaming platforms. As more of the crowd started to file in, I was surprised by the make-up of the crowd not only after Burr Oak’s performance but also anticipating Big Thief devotees to swarm for a Buck Meek solo concert. While the expected stream of millennials and college students packed the room, a lot of older Chicago locals stopped by to catch the last night of TMK fest, as the next two acts played much more mellow sets.

Twain, the recording project of Low Anthem member Mat Davidson, performed next. Davidson took the stage with his acoustic guitar and played some very introspective indie-folk ballads about self doubt and faith. While he was certainly moving and held the audience’s attention, I had to sit down and relax to enjoy it. It was a sort of energetic letdown after the surprising performance of Burr Oak, and it turned Schubas into more of a coffee shop than concert venue. That vibe continued with Bill McKay, another singer/songwriter who soldiered on stage with nothing but his voice and acoustic guitar. Despite his obvious talent and smooth songwriting abilities, I felt his performance was a bit repetitive, as by that time, I was ready to see Buck Meek. The coffee shop vibe progressed to a library, as conversations near the back of the room were shushed to a halt if their volume interfered with McKay’s soft crooning and twangy guitar plucking.

Buck Meek finally entered in front a suddenly lively crowd, and started with the unreleased “Pareidolia” which carried a lot more energy than the previous 90 minutes of show time. As a solo act, Meek clearly has more southern folk roots in his music than Big Thief, with slide guitar work and backing keyboard riffs reminiscent of the Allman Brothers or, more obscurely, Barefoot Jerry. Meek’s style seems more loose and jam-centric than the tight indie-pop songs of Big Thief; more room for improvisation and instrumental wanderings.

Meek’s more laidback and reserved personality shined through during his set, as he would faintly introduce songs in a soft southern twang, even seeming taken aback at the loud ovation before he played the unreleased “Two Moons.” For as reclusive and reserved as Big Thief’s collective personality seems, Buck Meek definitely creates his own identity as a solo artist, even if not entirely intentional. The nervous smiles and causal quips about the cold Chicago weather he makes in between introspective folk ballads are endearing as hell, to be honest.

Buck Meek made a great headlining act after a night of very introspective music, and he shows an obvious appeal to fans of different backgrounds who might consider going to see him on his first few solo shows.