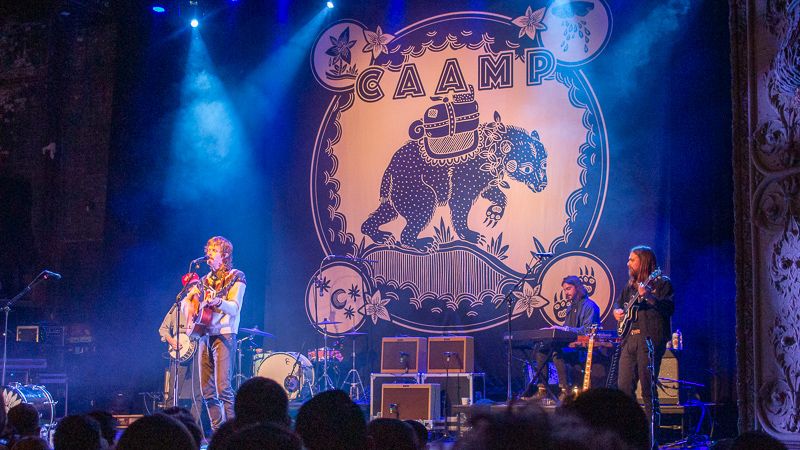 The lights shut off, the band strolled on stage and the smooth rasp of Taylor Meier fell over the audience like a cozy blanket.

They opened with “No Sleep,” the song’s warm guitar tones and folk archetypes painting the picture of a young band traveling cross-country, encountering love and hardship along the way. Along with Meier, the crowd shouted the refrain at the end of the third verse: “I wanna love her all day/ And all of the night/ I wanna love her all day/ For the rest of my life.”

The band then glided into “Just Wonderin” from their EP Boys (Side B). The song is a shuffling saloon blues overflowing with sputtering Johnny Cash-esque lines like “Got up outta Gokan/ Pitched herself in Bocain/ Stopped by a road man/ Had to keep on going.”

A few songs into the set, multi-instrumentalist Evan Westfall walked out from behind the drum kit and strapped on a banjo for the band’s hit “Vagabond.” The audience hollered in excitement when Meier played the finger-picked intro. Midway through the song, the band stopped and waited for applause. Then Meier let out a squealed “Yip!” and the band jumped right back in, Westfall now also playing a kick drum with his foot.

The band rode the audience’s excitement into “Penny, Heads Up,” a charming love song headed by a catchy riff played on both the acoustic guitar and banjo. Couples in the audience put their arms around each other and swayed as Meier sang, “We ain’t got much/ What we got’s enough/ When the going gets tough/ We make our own good luck.”

Meier’s ability to weave classic folk storytelling in the verses with catchy singalong choruses was most evident on “Keep the Blues Away,” which starts with “I got lost down in Rio/ I was runnin’ from the FBI/ Yeah they had me on some charges back in San Anton’/ You know I never got the reason why” and then glides into the ascending chorus, “I get hiiiiiiiiiigh ‘cause I want to/ I get looooow everyday.”

Toward the middle of Caamp’s set, everyone but Meier exited the stage. Armed with an acoustic guitar, he performed the somber “Strawberries.” Finishing the soft ballad with “I’ve got you in the end/ I wish I had you from the start,” Meier thanked the audience and wiped tears from his eyes.

Later on in the set, the band played “Wunderbar,” a joyous tune colored with interesting chords, “Wolf Song,” a melancholy song about putting love on hold and “Officer of Love,” an unreleased track with great vocal harmonies.

Throughout the set, Meier’s voice remained relatively stagnant, so when he climbed into his upper register for songs like “Hey Joe,” it was electrifying. 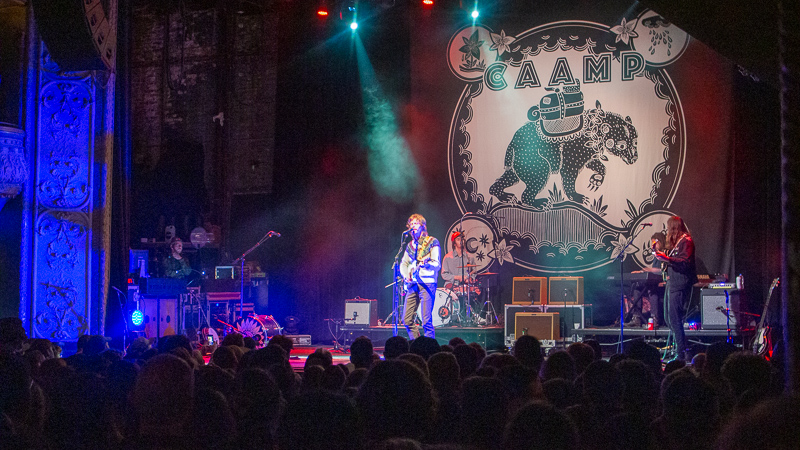 Finishing strong, Caamp ventured into its more upbeat catalog, smiling through the vibrant “Peach Fuzz.” Meier got behind the kit for “Going to the Country,” a folk-rocker driven by Westfall’s distorted guitar riff. The entire audience joined in for the howling chorus (“And it’s clear that you can’t see/ You were wrooooong sometimes”), nearly shaking the walls of Thalia Hall.

Opening band Futurebirds helped close out the night by returning on stage with balloons, celebrating their last night on tour with the Ohio boys. Placing a mysterious brown bag at center stage, they told Caamp it was a gift for all the good times spent together on the road. As Meier began pillaging through the toilet paper wrapping and pulled out a six-pack of Smirnoff Ice, the crowd burst into applause.

Like champs, the band got on their knees, chugged the bottles, and got back up for an encore. After all, there’s no better way to end a night of heartwarming folk music than getting “Iced.”