Fire, bone, smoke, a crystal ball, and a silver chalice. Chelsea Wolfe’s show at Metro effectively cast a spell on her audience.

Aesthetically speaking, Wolfe, a California native, appeared best suited for Salem. Her flowing white, corseted gown skimmed the edges of the on-stage altar — a circle of white branches complete with flickering orange lights. Perhaps the witches of 1980s Sacramento from which Wolfe came are just a lesser-known sect of Wicca. While the visuals of Thursday’s show were thematically singular, Wolfe’s music is anything but.

In the decade since she began producing music, Wolfe’s body of work has dabbled in various genres. Each of her six studio albums has distinct elements and influences ranging from drone metal to more traditional folk music. Wolfe’s most recent release, Birth of Violence, leans heavily on stripped-down folk as opposed to her earlier crashing industrial undertones. In this album, as with the show, Wolfe managed to achieve more with less. Playing only an acoustic guitar, her performance of “The Mother Road” wandered, floated over its own lyrics, and held onto notes just long enough to unsettle.

Wolfe’s understated presence juxtaposed greatly with her on stage surroundings. She seemed to play for herself and did not interact with the audience. The crowd silently swayed, eyes affixed to Wolfe in her pulpit. 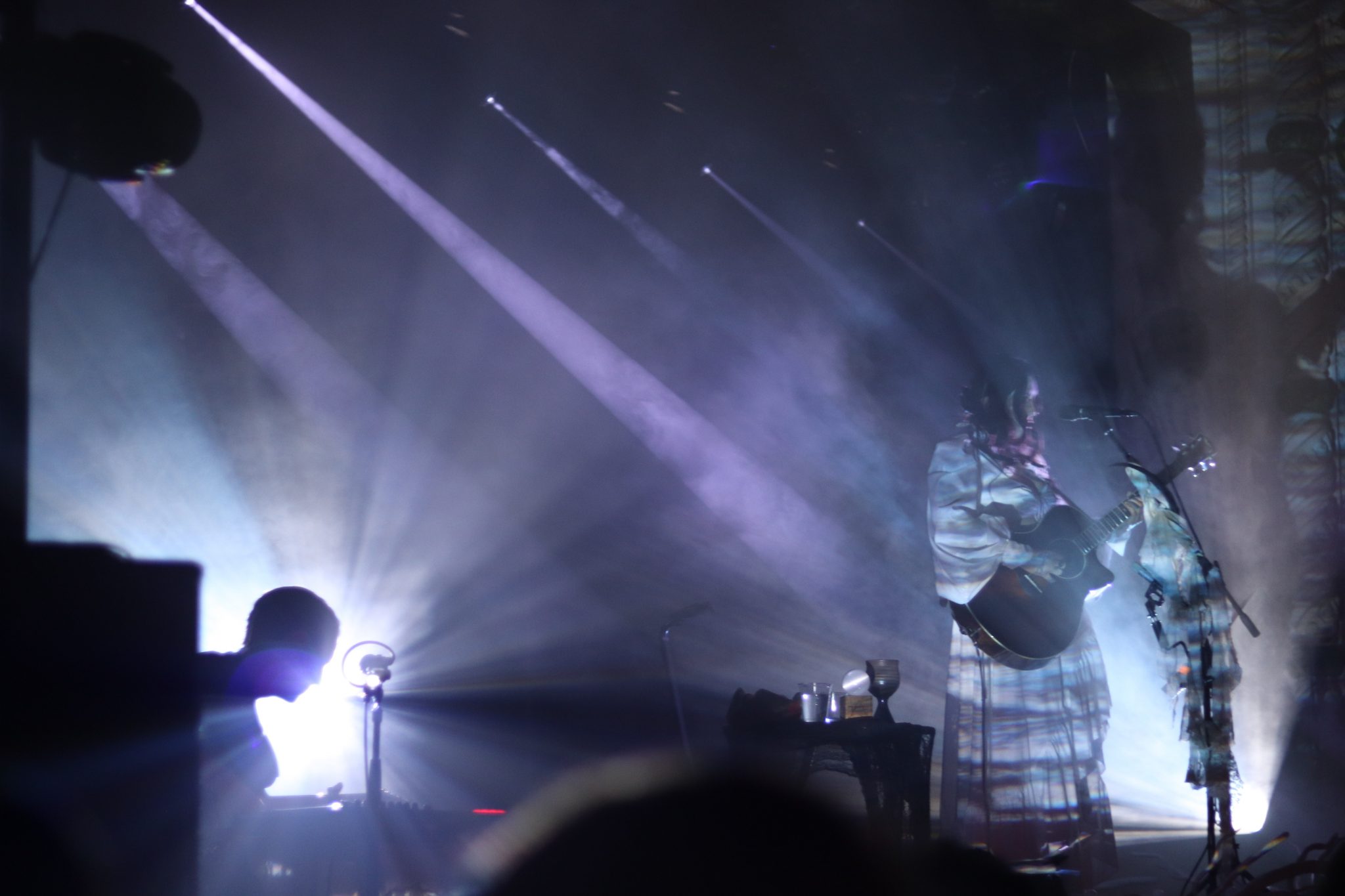 Wolfe played her older songs as well. Wolfe’s performance of “Cousins of the Antichrist” came off like a modern day dirge. Backed by looped recordings of tracks, Wolfe stood alone and lamented some loss of innocence. Although, the sources of her sorrow were never made clear. Wolfe ascribes multiple songs to an elusive “you” and the emotion of the music itself is tangible. The relationship between her solitary performance and her lonely music seems clear, but unfortunately, at times, it falls flat. The lyrical quality of Wolfe’s music functions in a similar way to the stage decor. The messaging is singular. The music is aware of what emotions it would like to evoke, and so it leans into them. Seemingly constant references to vampires and other gothic staples aid in these efforts. What’s missing is a sense of artist herself. In most circumstances, a show directing everyone’s attention solely to an illuminated figure would leave audiences with an understanding (or, at the very least, a suspicion) of who the musician is beyond her obvious dramatically goth exterior.

The issue does not lie in the quality of Wolfe’s work, but in its priorities. While Wolfe’s work continues to grow and adapt, it fits squarely into its own prescribed aesthetics. On one hand this can help tie her body of work together, on the other it can become a crutch. Wolfe has the capacity, and the potential, to tone down her enchantress persona, and still produce a dynamic performance.