Chris Farren’s most recent album Born Hot and his self-described half-joking “guaranteed perfect set” provides an apt initial insight into what I got to see at Farren’s Chicago stop at Beat Kitchen on his first North American tour. Although I hadn’t listened to much of his music beforehand, Chris Farren’s valiant proclamations of self-love and confidence, alongside a touch of humor, convinced me to love him (and his music) right there with him.

Accompanied by openers Macseal and Retirement Party, the high-energy three hour show felt like jamming with longtime friends in the best kind of way. I’d never been to a show at Beat Kitchen before; it’s a pretty tiny venue with a quaint bar and a backroom that can only hold a few hundred people. The performing artists were roaming around the venue or working the merch table, and all of them were friendly enough to talk to me or anyone else that wanted to say hey.

Francesca Impastato, or Frankie, the drummer of Macseal, said she was feeling great about the show, “I love Chicago. We’ve played here like five times. We’re from New York, but it always feels homey here.”

I’m used to going to shows where some jostling is more than anticipated, but the surprisingly relaxed (and still very enthusiastic) crowd was a nice change of pace. The audience was a wide mix of ages, and it seemed like most of the people I talked to were there to have a good Thursday night over knowing the music.

Macseal, the first opening act, started off their set funnily enough by asking about how excited the crowd was to see Chris Farren. After their short sort of non-introduction, they launched right into it, mostly playing songs off their most recent release Super Enthusiast which dropped in 2019. I definitely went into this already being a fan of their music; overall, I felt like it was definitely a great experience, but there was not much more to say about it beside it being a clean, mellow set.

Conversely, Retirement Party followed up Macseal’s set with a bang. Hailing from Chicago, they kicked off their set with their guitarist emerging from behind the shower-curtain turned backdrop. He played a single drawn out note while sporting a mask before the other three members jumped out to join him in playing their number one song, “Passion Fruit Tea.” The band looked like they were putting everything they had into every single song they played; with lead singer Avery Springer’s funnily engaging stream-of-consciousness lyrics and crazy upbeat sound, the self-described “bullshit-pop” band managed to completely shake the house.

Springer said that she’s excited to be playing their hometown show, “This tour itself has been just awesome. The shows have been really fun every night. All the bands are great… What else could I ask for?”

They played an unreleased song, “Runaway Dog,” a high-energy song from their unofficially announced album set to release later this year. Retirement Party has only been around for three years, but their strong stage presence says differently. I’d only been bumping their music a few days before the show, but I’d definitely call myself a fan after the show. The powerful set felt like a sprint, and before I knew it, they were hyping the crowd up for Chris Farren.

Chris Farren was truly a show. Farren took to the stage to an eager crowd and played in front of a homemade backdrop, using a projector to throw up his self-portraits, requests for birthday wishes three months in advance, or to show some humility with phrases like “another guitar solo.” Farren was constantly thrashing across the stage and seemed like he was throwing himself not only into the music, but into a grand persona. 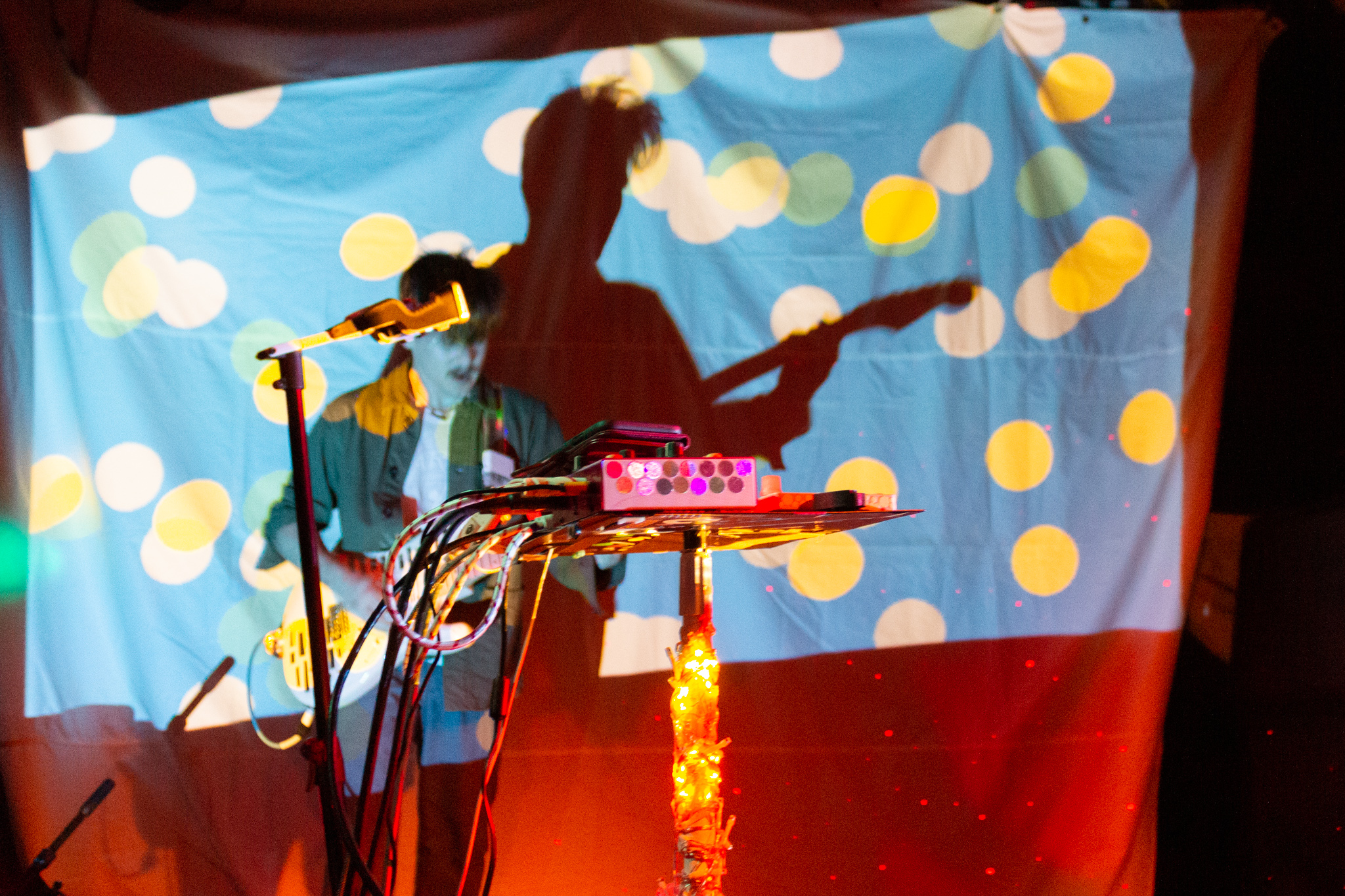 Nearing the end of his set, Farren jumped off the stage and walked through the crowd all the way back into the bar, dragging the microphone with him as he finished off a song offstage. He hopped back up to play a few more songs before asking the audience to guess how much 1100 custom balloons cost: “They cost $76! But you’re not getting that many. I love you, though, Chicago!” After seeing him live, I think I’m inclined to listen to his music, but more so to watch him; Farren’s personality seems to be just as important as his sound (and I kind of love it).

Definitely catch Chris Farren on the Born Hot Tour with friends Retirement Party and Macseal if you have the chance, and watch out for Retirement Party’s new album dropping later this year!