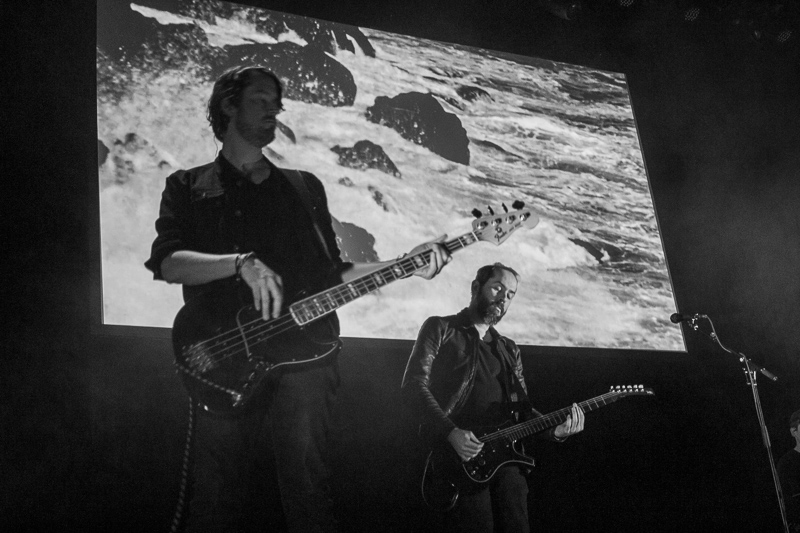 Cigarettes After Sex began their show at Thalia Hall with a short film rather than an opener, and it was a very interesting choice. The film, like the band’s whole aesthetic, was black and white, and lasted for about half an hour. A slow, moody score and a rainy ocean made up much of the film, with white lyrics from their upcoming record Cry (coming out October 25) appearing at intervals. The majority of the film was only score and natural shots, which made the thirty minute runtime feel every moment of its length. When figures finally appeared, people cheered. A short scene involving no dialogue between two lovers was the only moment of action, and quickly the screen returned to the stormy beach. The film was a peculiar idea, and it certainly captured some aspects of the upcoming albums’ themes, but it can be best summarized by an audience member, “This is what half of my Tumblr looks like.”

Overall, the film was a very different vehicle for the lyrics than the songs (to which they ultimately belonged) were. The text was the only changing thing for much of the film, so it was paid much more attention to as an entire line, which made the feelings within it feel insincere. Writing an angsty quote on a whiteboard makes the words much more cringy than spooling them out over an entire verse, especially at the tempo of the average Cigarettes After Sex song. The ethereal vocal coupled with the slow tempo make more emotional lyrics meaningful, but removed from their context they feel stunted and synthetic. The film also produced a problem for the audience where more casual concert-goers made conversation or shouted comments, which was annoying for anyone attempting to take the film seriously. But in the moment when the band entered, dressed in all black paired with their black instruments, the film did seem to serve its purpose.

The show itself was a marvel of planning and execution. The monochromatic color palette, plain light design, and the band’s sleepy, ambient pop could certainly have made for a boring show that seemed like one too-long song. But with the addition of some dynamic, textural elements, the show was a beautiful realization of the band’s sound. The projected images and videos were full of high contrast art that faded in and out with some choruses and the thoughtful change between warm and cool lighting, along with static and moving spotlights, adding many layers to a fully black-and-white show.

The setlist was well-crafted, with songs like “Crush” and “Neon Moon” shining especially. A cover of “Keep On Loving You” was a stunning choice — a rare moment where a band’s sound is so strong that when they turn it into a completely out-of-genre song, they make it completely theirs. The selections from upcoming Cry were also impressive. “Falling in Love” allowed lead singer and guitarist Greg Gonzales to bring a new, earnest energy to his leading line, and the cascading guitar coupled with the sweet lyrics made for a remarkable love song. “Don’t Let Me Go” had a very dream-like, slurred guitar line that transitioned into a more traditional solo, which felt like a substantial shift from the more ambient songs of their debut. Their encore, however, was the clear climax to the set. “Dreaming of You” began with their characteristic calm, until Gonzales ripped into a feedback heavy, grungy guitar line. At the same moment, stark white lights blew the whole hall into relief. The rest of the song felt like the realization of the slow, careful jamming of their set and made for a memorable ending.