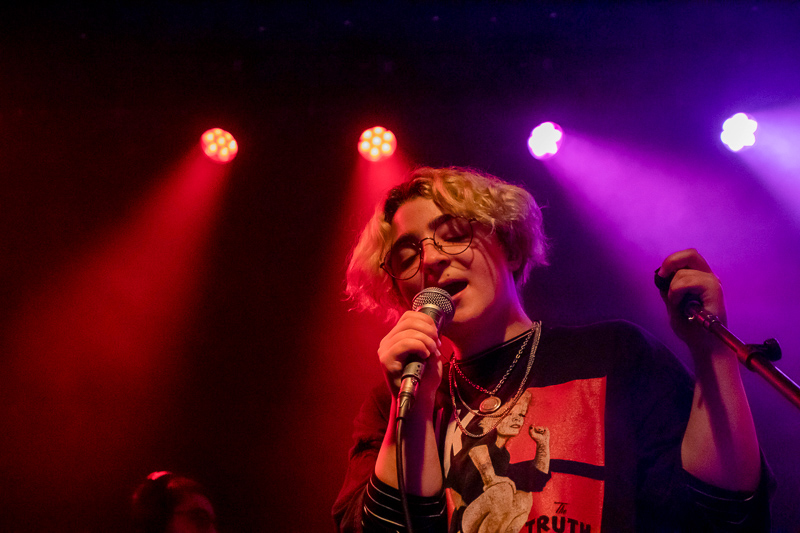 After much anticipation from the crowd, Claud Mintz emerged onto the Schubas stage in an oversized P!NK t-shirt and chains draping from their neck. Their attitude was casual and relaxed, as if they were a seasoned performer. However, at only 20 years old, Claud is relatively new to the music scene, releasing their first song on Soundcloud just two years ago. They started their music career while at Syracuse University but later dropped out to focus on music. Claud has headlined shows, played and toured with Clairo, girl in red, and The María’s, and released several singles, music videos, and an EP called Sideline Star.

The show opened with Chicago indie artist Jackie Hayes. Her set was composed of a lot of new songs, many of which she played by herself with just her guitar. However, when she sang with her band, their sound was captivating. The set lasted for about half an hour. Towards the end, more and more people started filing in, but unfortunately, the large crowd was disruptive with their loud conversations. Despite this, Jackie Hayes continued on like a true professional and ended her set with an enchanting solo.

There was a thirty minute break as the stage crew set up for Claud. Finally, the lights went dim and Claud came out of the side door. The crowd screamed as they began performing “If I Were You.” Throughout the show, Claud transitioned from dancing and jumping around the stage to emotionally singing while playing their guitar. Their stage presence was strong and comfortable, and they kept the audience interested throughout the entire show.

One thing I particularly enjoyed about Claud’s set was that they engaged with the audience in between songs. Often times, at concerts, artists never really speak to the audience, or if they do, it always feels unnatural; however, this was not the case with Claud. They mentioned how their family, friends, and dentist was at the show, many of whom were standing to my left, and there were quite a lot of them, loudly cheering in support of Claud after every song.

One of Claud’s last songs of the night was “Easy;” they prefaced the song by telling the story of how Lil Nas X DM’ed them on Instagram a while back saying that “Easy” makes him cry, and I can see why. The set ended with an encore performance of an unreleased song that Claud wrote in their dorm back when they were still at Syracuse. It was a touching end to a great show.

Claud’s performance was intimate and emotional but also fun and engaging. It is refreshing to hear such genuine songwriting that can bring joy to all types of listeners. I look forward to seeing their music career progress even further.