On October 21st, we sat down with Patrick Budde, a Chicago-based musician (who performs under the stage name of Perfect Posture), Northwestern alumni, and founder of Preserve Records at Bang Bang Pie Shop in Ravenswood.

The following is an edited and condensed version of our conversation with Patrick.

As a NU alumni, can you talk about what you studied and how you got where you are after graduation?

There’s no real clear path to what I studied and where I am now, but I guess that’s just how it goes. I was a theater major, so I knew I was a creative person…the medium I was most drawn to was theater…I love putting on shows, I love collaboration, I love putting myself in other perspectives, so anyways Northwestern has a great program for that…After I graduated I spent two years working on and off as an actor in Chicago. And then…the well of whatever energy I was getting from the theater scene started to dry up.

Basically I’ve been playing music far longer than I’ve been doing theater, but it’s always been a hobby, and at some point I wanted to cultivate an artistic endeavor that was more born out of my own self. When you’re an actor, you basically can’t work unless someone gives you work, and I think in a musician’s line of work it’s all self-generated. If you’re busy it’s because you’re working well, and you have more ownership of your successes and failures. When you’re an actor, I’ve found, it can be like, “well this theater company’s season just isn’t really good for me,” and a musician doesn’t necessarily have that issue…[It’s] more akin to playwriting, I guess, than it is to acting in that you are producing; you are consciously creating.

I took kind of a scary leap into something that I had no training in, but a lot of passion [for], and started learning how to write, how to record and produce, and then…I ended up meeting a lot of friends and starting this label with people who also wanted to have their stuff produced by me.

So you’re a self taught musician as well as a producer?

I’m a self taught producer. I’m a musician that took piano in middle school and guitar in high school, and I have a pretty elementary music theory background, but then taught myself a boatload of instruments just based around that original theory. I never took a class—I didn’t go to Bienen or anything—so in a way, it’s still pretty pure and passion-driven because I never really had professors drilling me. My rigid training is in acting, and I still have the voices of my professors in the back of my head with all that stuff. With music I’m very impulsive, and I trust that in a way that kind of paradoxically I don’t think I do as an actor. I’m a little bit more neurotic… Music, to me…is pretty loose when I’m doing it.

The reason I started it is because…I’m used to making art in a community with other people. As much as it’s really important as a writer to spend time alone and figure stuff out, it sucks to…feel like you don’t have a family or a company. There’s a group at Northwestern I was a part of called Wave Productions. It was a theater company that was like a big family I had when I was at school, and I think I’m always searching for company in what I’m doing…I was this guy who wanted to do music in the city, [and] at the moment I don’t know a lot of people in the scene in the city…I had to just build my own little community up. Everyone wants to have a crew. I see it a lot in hip hop too, like people coming up as a crew, and I like that idea…The only reason Preserve Records is made up of the people it is, is just because those are the people who have come into my orbit. It’s been very organic…It’s just been like, “Oh, I like your songs, and you came up to me [and] asked to work on an album.” I’ve produced probably half of the records that I’ve been including under that brand…well before the label was even an idea. We just kind of amassed, did these DIY records and then we were like, “We’ve done enough of these, let’s call it a record label.”

Bouncing off the DIY aspect of things, after the release of your Window EP, people quickly lumped you into the bedroom pop sub-genre. Is that something that you’re happy about?

Labels are good for some things and not good for others, but bedroom pop is a great place for… what I do. There is a sort of pristine thing… I feel like in lo-fi music it’s a very hard earned lo-fi sound. Like, if you actually listen to things that sound shitty you’re like, “This just sucks. This isn’t good lo-fi music, this is just bad.” So I think there are some ways of producing that I still don’t necessarily fully grasp, like how to make something sound that sort of warm lo-fi glow without just cranking the distortion to a point where it is unbearable. And I guess another inspiration, Flaming Lips is one of my favorite bands, I love them. I’m definitely…sentimental, but if there’s something really sweet I always hope to subvert it with a little bit of something kind of weird or gross. The Flaming Lips do that really well. Sufjan’s always been another one for me, and his stuff always sounds pretty polished.

It sounds like you have a very certain style to your musicality, but then your lyrics seem to be more pointing inwards. They’re sort of self-theorizing and philosophical at times.

I think that’s spot on. It’s easier for me to write music than it is to get into poetry, and probably the reason my lyrics can get introspective is because usually, I make a beat or a piece of improvisational music and then…I sort of get hypnotized by it…So oftentimes it ends up being that because I’ve made a sonic space where I’m comfortable to tap into things that I’m not feeling in my everyday moments, I’m like, “Oh I’m writing about love.” Or in some cases when I was writing some of the Window thing it was some kind of…unnoticed depression that I was like, “Oh shit, that’s what’s going on.”

So aspects of yourself reveal themselves through your work.

Music is very relaxing to me and very therapeutic, and if I can let my guard down, sometimes things come up that are surprising but honest.

The first EP, W(h)ee, was mostly instrumental, and then Window was obviously lyrical. Is that evidence of your progression as an artist or just coincidental?

I mean I have composed lots of music that is not on bandcamp…I compose things in a lot of genres too. But the W(h)ee Tunes was a soundtrack I did for a friend’s theater show because I’m still in a scene of a lot of people who went to Northwestern and did plays, and I’m sort of a lot of people’s go-to composer for certain things, which is really fun. But [with] that soundtrack, I was toying with certain software and certain samples that I use when I do make music for Perfect Posture, so the sort of instrumentation was similar…I put that out maybe two years ago when I was kicking around certain sonic ideas that I think ended up informing the sound that I made…for my songwriting. I envision that going forward, everything I put up will be a song that I’ve written the words to. But I was…at a point where I just wanted to put some stuff up and yeah, it just felt of a piece or in conversation with that.

Going back to the cover EP, I saw all the proceeds go to the American Foundation for Suicide Prevention.

Yeah, so that EP was something that Max Abner (a Northwestern alum from not that long ago, and the musician behind the band Pontac) and I actually just finished producing a full-length record together. It’s his album that I produced that we’re gonna put out in early 2020. But we finished that session and he was like, “Do you want to do a digital collaboration to make tribute to a couple of songwriters,” some of his favorites, and I was like, “Hell yeah!” I think I made all the beats on my laptop and then emailed them to him, and then he was able to record some vocals and some acoustic instruments, and then sent them back to me to mix and put together. The whole thing came together really quickly, and it’s nice to do something low stakes and small, like a cover or something, right after you finish a bunch of your own work. You just want to finish something that doesn’t totally exhaust you. 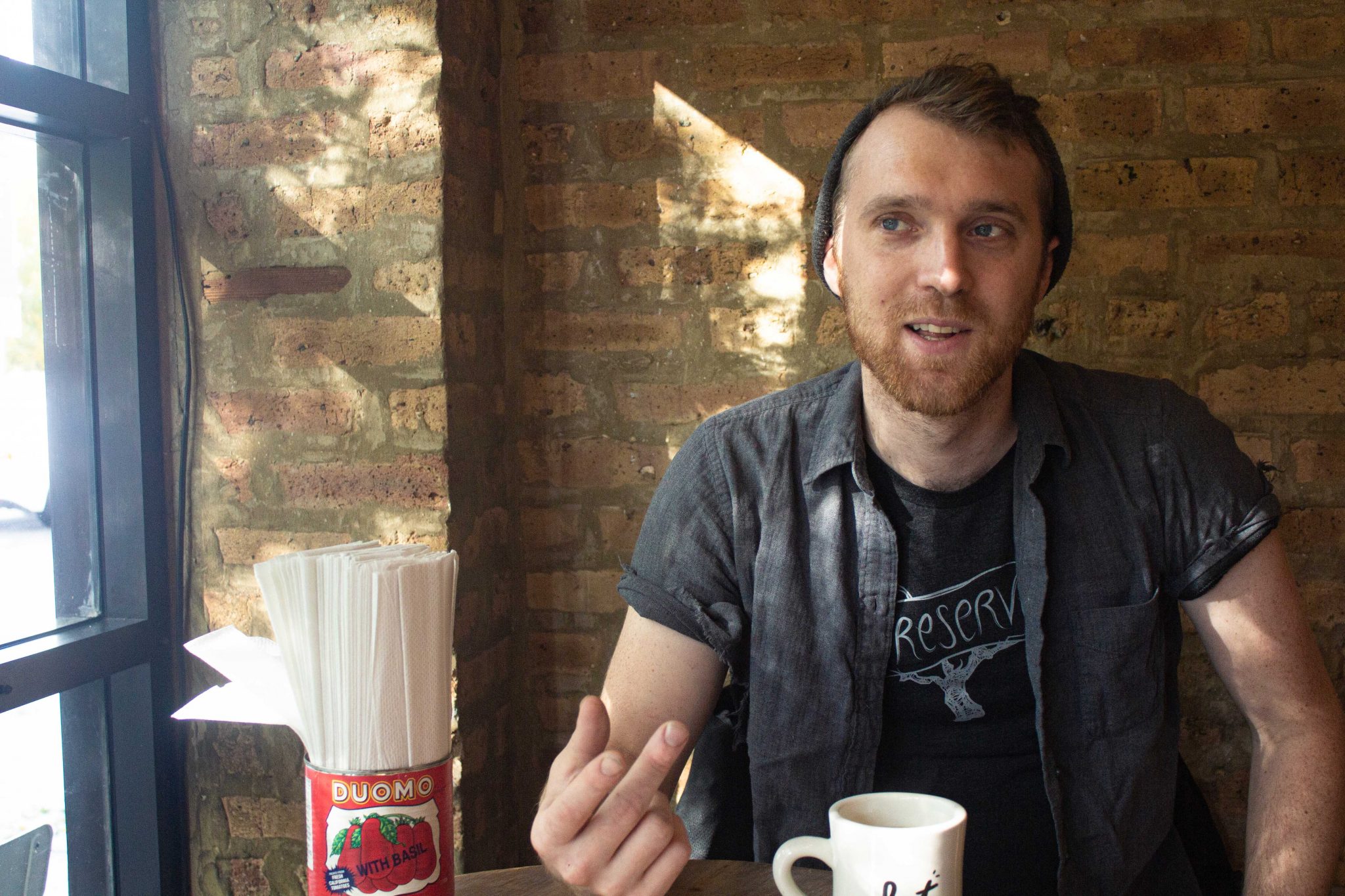 As far as performing and touring, what does your schedule like?

This is the last local show I have on the books, and the plan is for me to play a show at Kenyon College in Gambier, Ohio in the middle of November. It’s pretty late in the game to book something at this point but I do have a spare night, so I might be trying to find a spot in Cleveland or Columbus or something on my way back here. And then in the new year to get around and tour more in the Midwest, that’s the plan.

How many artists are on the Preserve Records label?

There’s a lot of overlap between musicians, but there are currently eight bands on the label. I think there’s a ninth project that might put out a record this year that’s another side project of an artist who is already represented on the label.

Do you have anything else you want to add?

It’s cool to talk to you guys. This is a new project, y’know…the album’s done, it’s time to start spreading the word and getting it out there. I’m just trying to meet more people and find other people who do–as we’re calling it–bedroom pop, because a lot of the people I hang out with do more folk and acoustic stuff. So I’m hoping to continue to meet people and geek out about electronics the way I do sometimes.

You can check out Patrick’s music and Preserve Record’s website here.