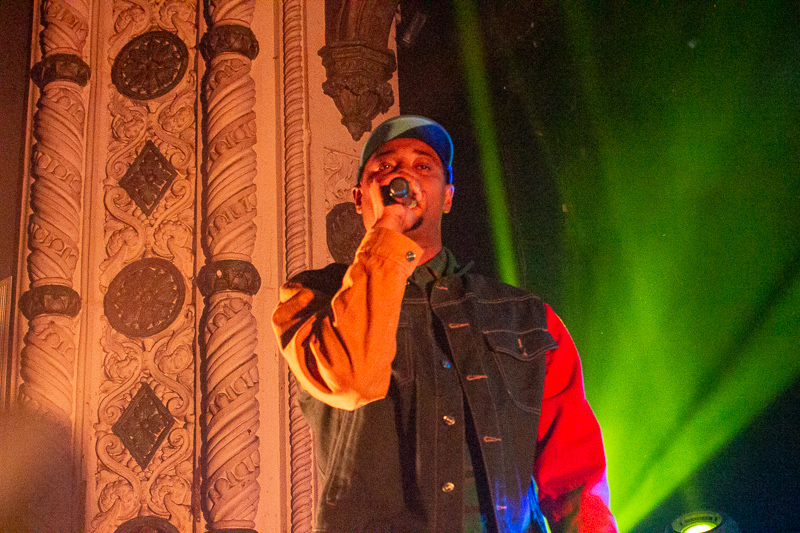 His lyrical mastery, his enigmatic stage presence, his new fixed teeth and fresh cut: each of these would make a fantastic story of Danny Browns at Metro. The night was not that simple. Danny Brown is one of the defining rap artists of the decade, a true modern icon. His five studio albums are each fantastic in their own right and display some of the most inventive sounds that rap has seen. The themes explored in his music show a transformation of not only an artist but also a man. At Metro, through their behavior, it was clear that Danny’s fans don’t all get it.

On Old, Danny’s 2013 release, he delivers 56 minutes and 36 seconds of high energy rave-songs that are simultaneously dizzyingly catchy and sonically crushing. Many of the tracks off Old can be viewed as anthems for substance use/abuse. The songs “Smokin & Drinkin” and “Dip” chronicle Danny’s times on all sorts of drugs. The audience went crazy to these tracks, starting a mosh-pit that involved even those who wished not to.

It could seem that Danny’s music encourages this reckless use of substances and wild drug-induced sex. But this is a tragic misreading of Danny’s brilliant work. There is no reason not to have fun with Danny’s party-anthems; they are truly unique, invigorating songs. Unfortunately, the audience at Metro stretched beyond the boundary of fun. At one point in the night, a young woman was stumbling through the crowd, eyes rolled back in her head so that only the whites were visible. Clearly under the influence of some substance stronger than alcohol, she was delirious and non-responsive, which made it legitimately scary seeing her stumble into the vicious mosh pit that assembled early in the show. Similarly disturbing, there were multiple instances of men aggressively hitting on different groups of women that had asked them to stop. Likely after a complaint, one man was escorted by Metro security away from the conglomeration of people.

These occurrences would be unacceptable at any performance, but with the obvious themes on 2016’s Atrocity Exhibition and 2019’s uknowhatimsayin¿ about the harmful effects of drug-abuse and the stereotypical party lifestyle, these actions were particularly antithetical to the performance. On his track “Ain’t it Funny” from Atrocity Exhibition, Danny explores the comedic, tragic nature of death. The audience brainlessly sang the line from the hook “Ain’t it Funny how it happens?” which is in reference to Danny thinking his lifestyle of being a non-stop partier, which has brought him so much success off XXX and Old, will inevitably kill him some day. The entire album is the post-party downward spiral (aptly, the title of the first track of the album) into depression.

With Danny’s performance of “Best Life” from uknowhatimsayin¿ he doesn’t hide anything, rapping “There ain’t no next life, so now I’m tryna live my best life.” The whole album is an abrupt change of sound for Danny. The album isn’t nearly as overly experimental. Danny Brown is seemingly accepting that him performing on some dope is all he needs to make great music. The album is clearly inspired by self-reflection.

Danny Brown performed his set in generally the same order as his albums have been released, with the last four songs of the night all coming off of uknowhatimsayin¿. Danny’s performance took the audience through the storyline of his albums, from drug-induced nights of escapism to accepting self-improvement and trying to be the best he can be. A valuable lesson for everyone that night delivered from Uncle Danny, a man with some serious tongue game.