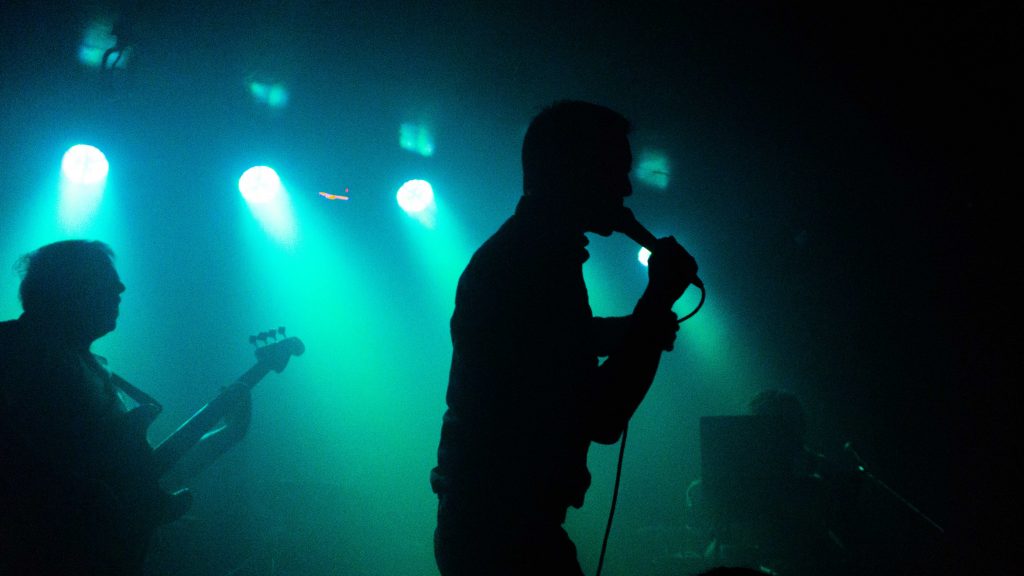 Daughters’ performance on Sunday night at Beat Kitchen was like watching a horror film without the ability to cover your eyes.

I’d heard talk of their show being “visceral,” but I did not expect the cacophonic, angry, and primal experience that it turned out to be. It was as if the combination of frontman Alexis Marshall’s aggressiveness and the foreboding instrumentation that accompanied him unleashed the inner animal in everyone.

But before that could happen, the crowd was subjected to two opening bands.

First up was Ganser, a local act that seemed to fuse post-punk with noise rock. Their set was dark and moody, as vocalist Nadia Garofalo supported her speak-singing with animated facial expressions and hand gestures. Her vocal style immediately prompted comparison to Debora Iyall of Romeo Void (particularly on “Never Say Never”), though their musical composition was more akin to that of Sonic Youth. Guitarist Charlie Landsman stood out immediately due to his choppy, unbridled riffs and wild thrashing. This carried the band into the noise genre, often creating that wall-of-sound effect. 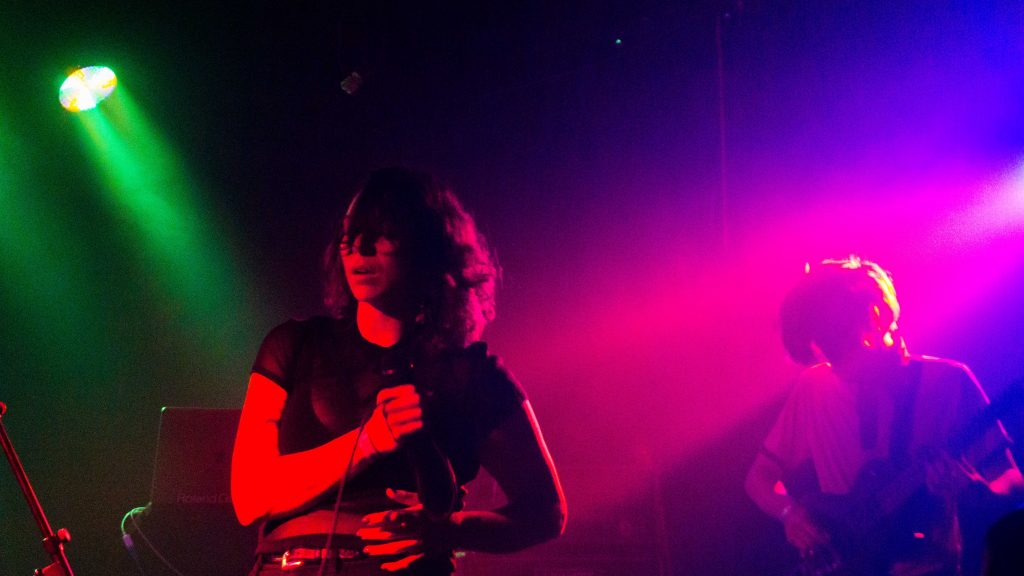 Kentucky four-piece Jaye Jayle was next. With the deconstruction and subsequent building of their compositions, they stood out to me as a true noise rock band. Most of their songs felt like the sonic equivalent of someone coming toward you, with paired vibrations from the bass and drums penetrating every part of the body. Vocalist Evan Patterson’s impossibly low and husky tone combined with generally dark lyrics elevated the instrumentals, forcing one’s body to sway like a pendulum. The band even incorporated a saxophonist, and all I can say is that I have never heard a saxophone make those sounds before. Overall, Jaye Jayle was simple and droney, but incredibly impressive. 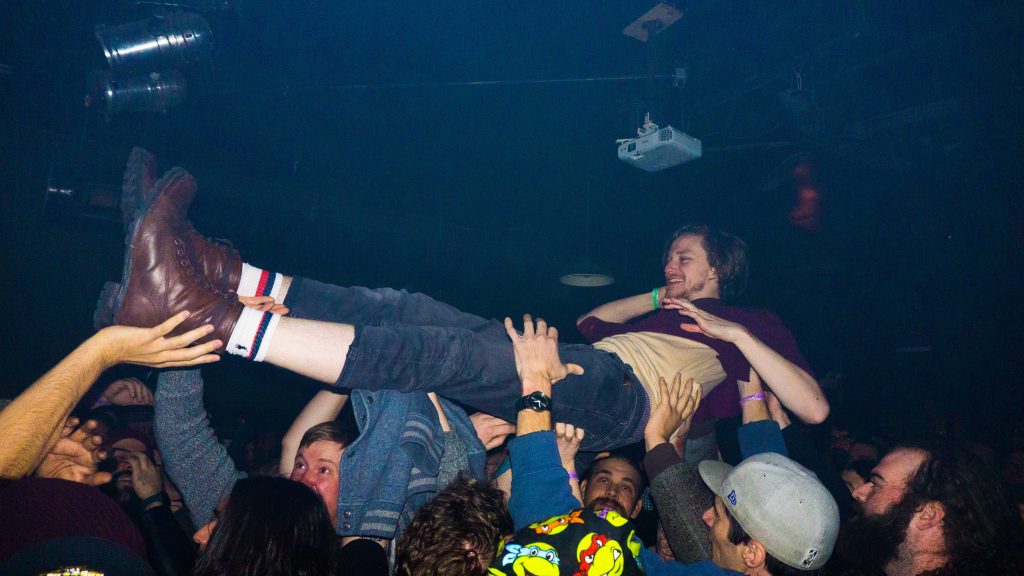 Now, for the feature presentation: Daughters. Six band members came on stage, most notably Marshall, who was wearing a black suit and button down shirt. Marshall screamed “No talking!” at a man in the front row, and then immediately launched into their first song, which was jarring. The red strobe lights and Marshall’s demonic wrist movements established the scary movie vibe, and the fact that Marshall kept grabbing people and yelling into their faces made it all too real. The energy of the crowd was animalistic, ensuing in moshing that was definitely dangerous. 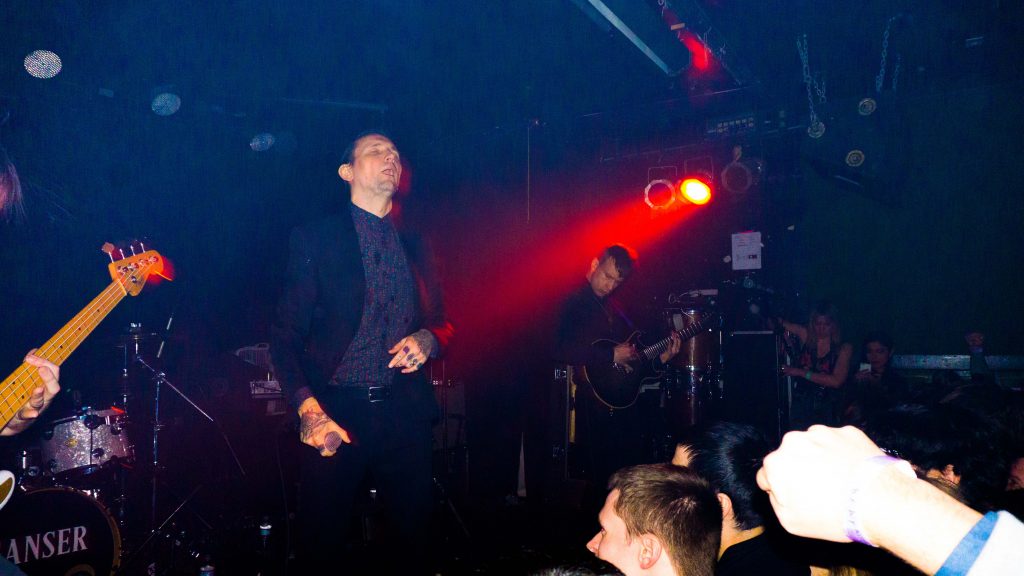 With their newest album You Won’t Get What You Want having received a rare perfect score from the Internet’s Busiest Music Nerd Anthony Fantano, any breaks in their set were stifled by audience members yelling “10/10!” One could tell that Marshall hated this. Or maybe that was just part of the act. The band powered through their set, some highlights including “Long Road, No Turns,” “Satan in the Wait,” and “Daughter” all from their new album, during which Marshall’s antics continued. He deep throated the mic, wrapped the cord around his neck like a noose, and spit constantly. Whenever he took a sip of water, he didn’t swallow, instead letting it drip down his face. At this point, he had ditched his suit jacket and was down to his unbuttoned shirt, exposing a white tank top. As he sang, he ripped his undershirt, letting the audience take it entirely off. Clearly on a roll, he then grabbed the hand of an audience member, sucking his fingers in a manner that can only be described as sexual. By the end of their last song, he began to kick and hit his band members, knocking over the cymbals of the drum set and unintelligibly yelling at the crowd. It was extremely entertaining, but also a cause for slight concern. 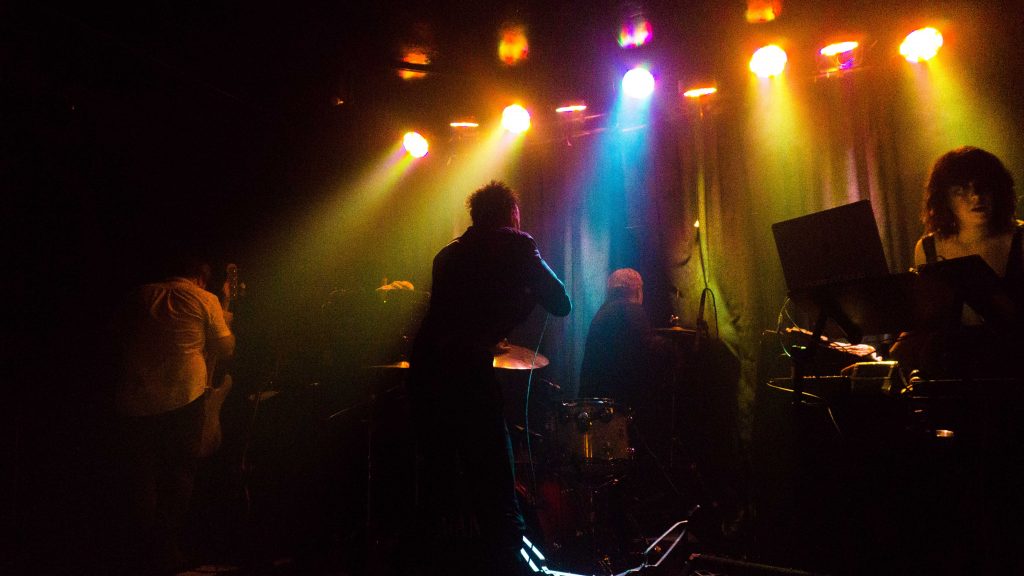 On the train home , I looked more into Marshall to try and determine if his violent stage personality was all an act. The answer is yes, after finding on Instagram that he is happily married with two adorable sons. I have to admit, looking at pictures of him enjoying Christmas lights with his little family definitely made me feel a little less violated by the experience.

Since John Mayer’s 2003 hit is still the first result when googling “Daughters,” it would be an understatement to say that they deserve more recognition for their innovative-yet-horrifying music – and yes, visceral  performance. Indeed, seeing Daughters live was like watching a horror movie, but maybe I didn’t want to look away after all. It was just too damn captivating.