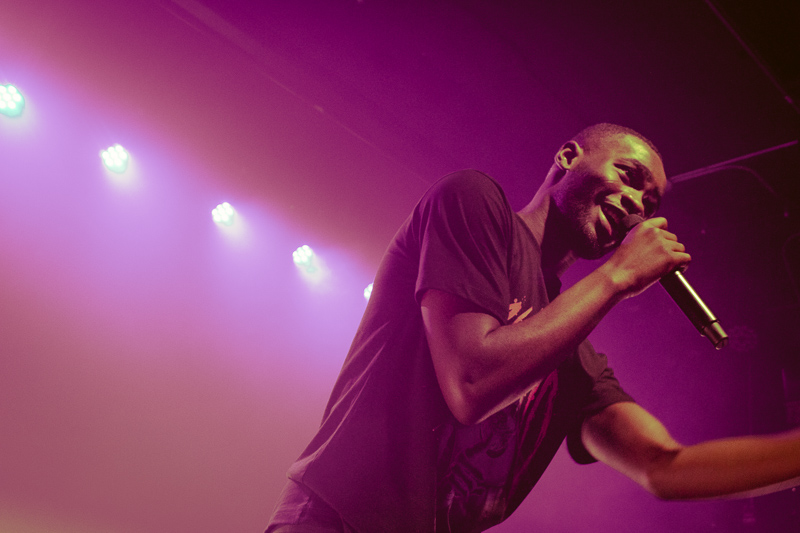 It’s often difficult to remember Dave is just 20 years old, considering the different roads he’s already traveled in his rap career, and that self-reflection is the central theme of his latest album Psychodrama. Dave often discusses the personal effects of growing up in a low income household in an equally unstable area of South London, Streatham, while acknowledging the external factors that birthed his hostile childhood environment, such as the cruelty of wealth inequality and systemic racism. It’s clear that Dave sees rapping as therapeutic, and his live performance makes sure to thank his supporters for the platform he’s been given.

Dave is one of the preeminent voices of British hip hop, and his rabid fan base is only continuing to grow, as was evident from Schubas’ packed crowd during his crisp, hour-long set, devoid of any opening acts. Brits living all over the midwest came to see their idol perform, as Chicago was Dave’s only non-coastal stop on his American tour. As soon as the doors opened, rabid fans rushed to the front of the venue, reciting their favorite Dave lyrics in distinctly British accents before he even took the stage. When the man of the hour did begin to perform, Schubas briefly transformed into a South London pub, with rival chants supporting both Manchester City and Manchester United, a gesture Dave greatly appreciated as it made him feel “right at home.”

After performing a couple tracks from Psychodrama, Dave launched into a bit of a greatest hits playlist, from “100M’s” to “Samantha” to “No words,” before calming the crowd down, bringing a keyboard out, and delivering his gripping narrative “Black,” a cut from Psychodrama that dictates what it means to have black skin in an ever-oppressive western culture. He presented himself as emotionally vulnerable on stage, acknowledging that he needed encouragement to be comfortable playing an instrument and rapping simultaneously. Dave later returned the favor of the raucously supportive crowd by passing around a mic to the front row so his biggest supporters could rap the first verse of his breakout 2016 hit “Thiago Silva,” eventually inviting one lucky fan to rap the whole song with him on stage.

While just 20 years old, Dave clearly appreciates and understands the weight of his relationship with his fans, many of whom are so rabidly devoted to him that most of the crowd was matching his bars throughout his set, word-for-word. After he finished performing “Funky Friday,” he soaked in one last ovation before expressing his gratitude for everyone who came to the show multiple times. Although we only got an hour of music, it was clear Dave’s fans got what they wanted — an emotionally true experience with their idol. It’s a rare experience to attend a show where the headliner is every attendee’s favorite audience, but that’s what Dave and a couple hundred rowdy blokes provided, as the only thing more impressive than Dave’s fiery delivery was the atmosphere and energy packed into Schubas.