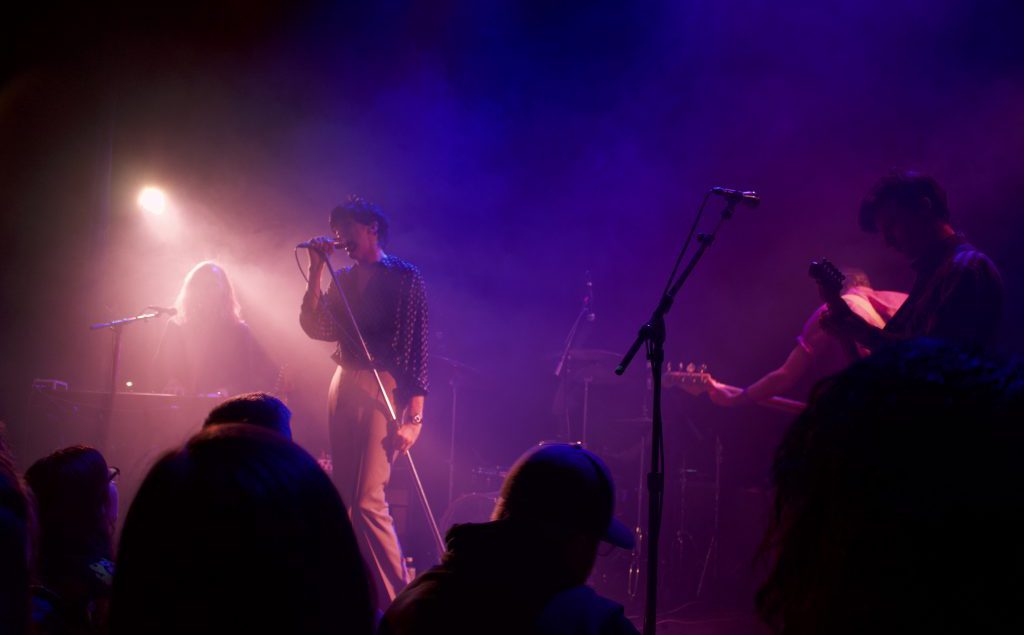 Opening for them was local post-rock/ noise outfit, Facts. They were just OK. Perfectly serviceable, gritty experimental rock that wasn’t melodic enough to really hook the audience, nor abrasive enough to command their attention by force. The band mainly served as a showcase for the appropriately tatted drummer, who was positioned front and center and whose rhythms were the focal point for most of their songs. He was the only member of the band who seemed to have any life in him, pounding out complicated but repetitive rhythms and bestowing some intense looks upon the audience while the bassist plodded away and the singer occasionally mumbled something into the microphone. If their delivery had matched the intensity of the sound they were going for, I think they could have have been captivating; instead, they mainly served as exceptionally noisy background noise. 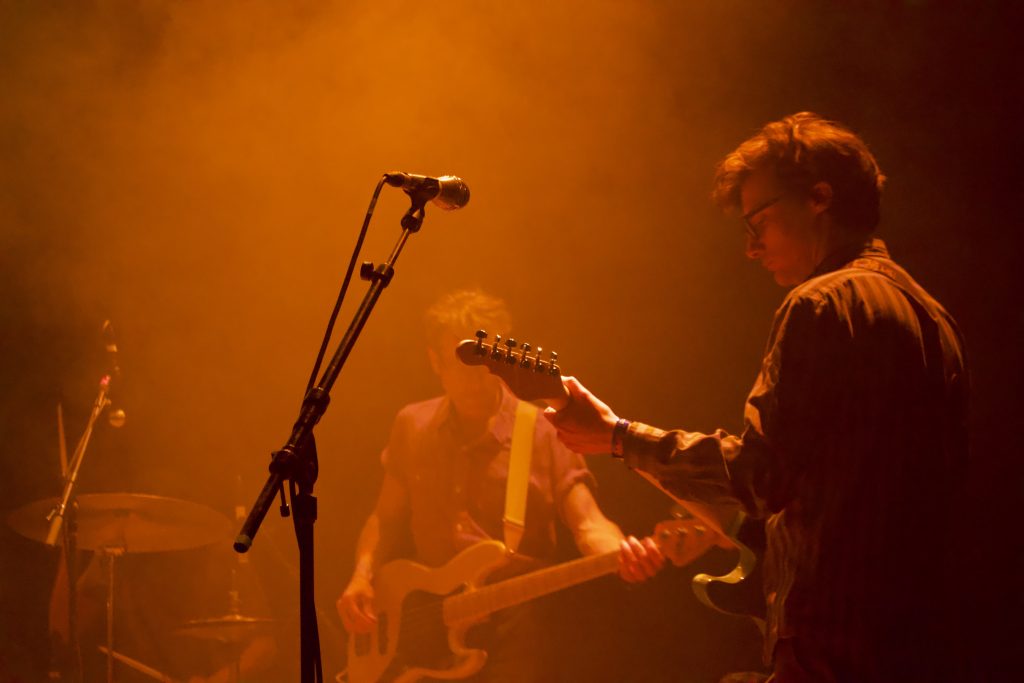 After about half an hour of Facts, and an elaborate sound check, Deerhunter came on, opening with a soaring wall of sound that morphed into their introverted hit “Agoraphobia.” Deerhunter has historically had two modes; the distorted, rawer sounds of their early ambient-dabbling album Cryptograms and the frenetic, lo-fi Monomania, and their layered, cleaner dream pop of Halcyon Digest and Fading Frontier. 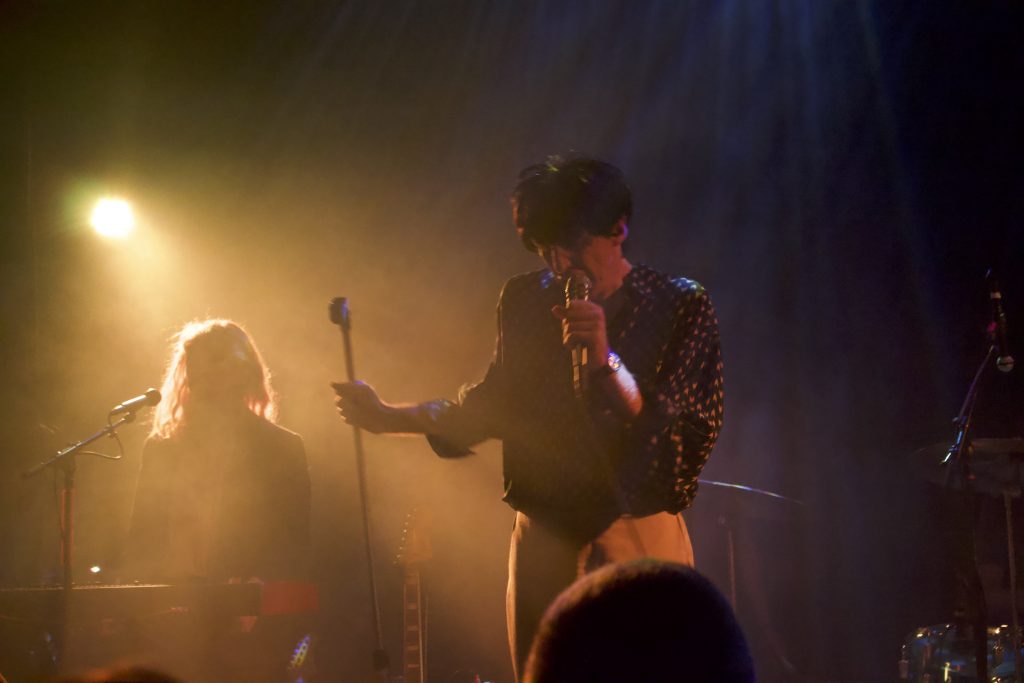 Much of their newest album, Why Hasn’t Everything Disappeared? is in the latter camp, albeit notable sonic detours; however their live show successfully bridged the two settings, and relatively tame studio cuts, with polished production like “No One’s Sleeping” appeared drenched in fuzz. Through extensive pedalboards, the band members are experts on making their instruments not sound like what they are (even the bassist had 5 pedals!), which made for a night of diverse sounds.

The band, for the most part, plowed through the setlist, occasionally stopping to switch off instruments. Finally, during the encore (which Deerhunter preemptively assured us was coming but encouraged us to be surprised about anyway), lead singer Bradford Cox addressed the audience and told us to welcome thirteen-year-old bassist Asher, a family friend of Cox’s, to fill in on the song “Cryptograms.” He held his own on the fast-paced bass part, passing it back to the band’s bassist for the closing track, one of my personal favorites, “Monomania.” 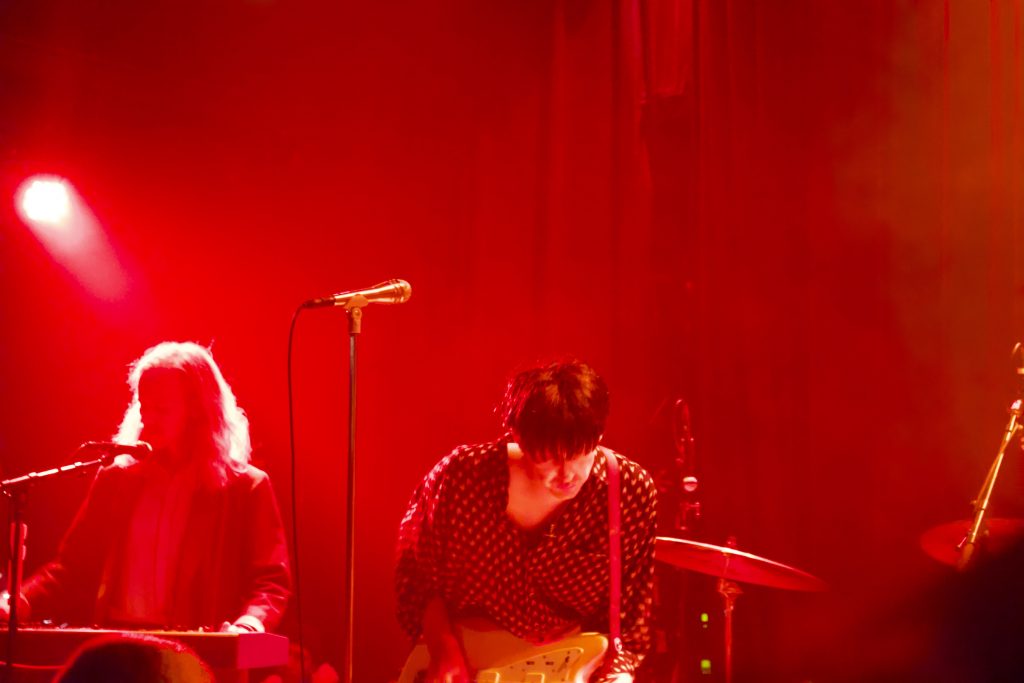 As I’d seen him do on Deerhunter’s fabled live performance on the Tonight Show, after the first minute, Cox exited the stage, dazedly ambling into the audience, his path quickly cleared by the stage attendants while the band played through the song’s extended outro. There came a point 6+ minutes in where everyone (audience members, crew, and other band members) seemed tired of Bradford’s act, but he stayed committed to the bit, generating guitar on amp feedback for a solid minute after everyone had left the stage. A fitting ending to an enjoyably off-kilter set.