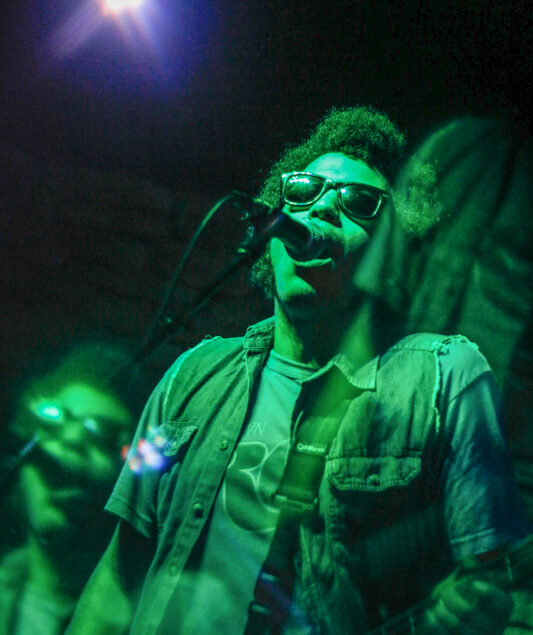 Photos by Hannah So

Four words were all that were needed to introduce Dee, Solomon, and Isaiah Radke at their sold out show with Riot Fest Presents: “We’re Radkey. Dig it.”

Since their start in 2010, this literal band of brothers from St. Joseph, Missouri has redefined what it means to be a rock band. A mix of sultry vocals, youthful energy, and tight musicianship give Radkey a unique and refreshing sound.

The band is typically called a punk rock group, but the brothers feel this label is constricting.

“We always consider ourselves more of a straight rock band just so we could do whatever kind of music we want to do. There’s definitely some punk elements to it, but there’s so many kind of standard rock songs we do to where we almost never really consider ourselves punk,” Isaiah said. “But I mean, The Police are considered a punk band. Maybe even The Buzzcocks.”

Creating Radkey’s unique sound is a collaborative effort between the brothers. They said it’s a toss up as to where or with whom an idea for a song begins, but once the process starts, “it just goes in a bunch of different ways and mixes up and you just never know what it’s going to be.” The guys said being brothers actually makes the process smoother.

Family has been an integral part of Radkey’s 10-year journey. One hour before the show, Matt Radke, the band’s dad and manager, helped set up the merch table.

“Our family was really supportive; our mom and dad,” Isaiah said. “Our dad’s the one who takes us on tours.”

Two Chicago-based bands started the night. Radar, who describe their music as “trash rock,” were anything but. At the start of their set the crowd was clustered in the back of the venue, but the band’s surprisingly playful performance (considering they played a song about a serial killer) and their stand-in drummer’s epic drum fills (they said their usual drummer “got coronavirus”) drew the crowd in. The audience packed even tighter for Blood People, who had some apparent fans in the crowd. In what was probably the loudest thirty minutes of my life, the crowd’s energy rose steadily. This much darker set, which was overwhelmingly just the sound of mic and amp feedback, was impossible not to head-bang to, and the guitar solo in “Burn the Ships” was utterly face-melting. The two bands were the perfect prelude to Radkey’s killer set: high energy and diverse.

Radkey’s set was like a rollercoaster that only went up. Just when I thought I had seen the full scope of their performance, the brothers brought more energy, more passion, and more musical variety. One moment the guys were grooving to the bass-heavy rhythms of “Hunger Pain,” and the next they were jumping several feet off the ground, partying to their more upbeat tracks like “Le Song.”

During my personal favorite song, “Love Spills,” a leather-clad man from the audience got those around him to start chanting “oi, oi, oi,” which sounded like it was straight out of AC/DC’s “TNT.”

Being musically diverse is a consistent goal for the band. “We always try to throw a song on that’s pretty different to the new record, just to remind everyone that we’re still doing weird stuff and trying a bunch of different new things,” Isaiah said. Radkey’s newest “different,” song is “Bend” — an acoustic song whose music video is out now.

This was not the band’s first appearance at a Riot Fest event; the brothers played the Fest in 2013 and 2014. “It’s always good to be doing stuff with them. We’ve been doing it ever since we were pretty young, so it’s awesome to come here and get some kind of a boost from them.”

They’ve also had multiple appearances at South by Southwest, a spot at Rock on the Range, a European tour, and even performed on stage in 2019 with Cheap Trick — one of the band’s biggest influences.

“They had us on stage to play “Surrender” with them in Kansas City. It was cool. We were just kind of hanging out. And they asked us if we wanted to do it and Dee learned the song and we just went out there. It is hilarious,” Isaiah said about the spur-of-the-moment performance. “We were just there to see the show.”

Over their 10 years, Radkey’s talent has been increasingly recognized. In 2018, the band partnered with MasterCard and SZA and ended up on billboards in New York City. The guys described this as a “holy shit” moment.

“That was like a moment of like, well, how the fuck did we actually get to that level? ‘Cause that’s one of the dreams when you’re a kid in the green room just thinking about like, ‘what if we were on billboards and stuff in New York and we played big shows’ and that’s kind of happened and it’s been really awesome.”

For the guys this is all a dream come true.

“For it to actually work out and us get to kind of see the world and play a bunch of shows… we definitely had high hopes for everything but you can’t really say you were expecting all of this stuff.”

But from watching their lively set, it’s no surprise that Radkey is successful. When Isaiah said, “I hope you like to dance,” before their song, “Hunger Pain,” he wasn’t kidding. The brothers’ absolute love for rock and their craft was infectious, producing a visually and sonically engaging show. Whether it was Solomon’s gritty smile as he hammered through drum fills, Dee’s effortlessly cool aura during his guitar solos (those in “Evil Doer” and “Rock & Roll Homeschool” were highlights), or Isaiah’s eyes-rolled-back descent into the rhythms, there was always something to catch my eye. At one moment Dee and Isaiah were in their own insular grooves and the next they were centerstage shredding back to back, rolling backwards, undulating on the floor, or getting the audience to clap along.

And in every moment, the trio’s personalities shone through. When half the audience broke out into a mosh during “Romance Dawn,” Isaiah smiled giddily. Or when the band reached the end of their setlist and the audience was chanting the band’s name, begging for an encore, Isaiah imitated the Spiderman web shooter.

Whether in concert or on social media, the Radke brothers seem to always be wholly themselves. On their YouTube channel, their music video for “Dark Black Makeup” sits next to a 15-minute Legend of Zelda Let’s Play. Isaiah said that he thinks it is unexpected for a rock group to be into video games and comics.

“We’re kind of weird. We were homeschooled and stuff so we’re still probably equally into kind of that scene as we are into music really. So that’s really a big thing for us. We post about it and stuff sometimes, but the amount we actually do that kind of stuff, it would be annoying.”

But for fans of Radkey, this trait is their trademark. The most Radkey-esque moment of the show occurred when a mosh broke out to the band’s rendition of the “Teen Titans Theme” by Puffy AmiYumi. Seeing leather-clad concertgoers covered in tattoos and piercings go crazy to a song popularized on Cartoon Network perfectly summed up the night and Radkey as a band: quirky, unexpected, and a hell of a lot of fun.