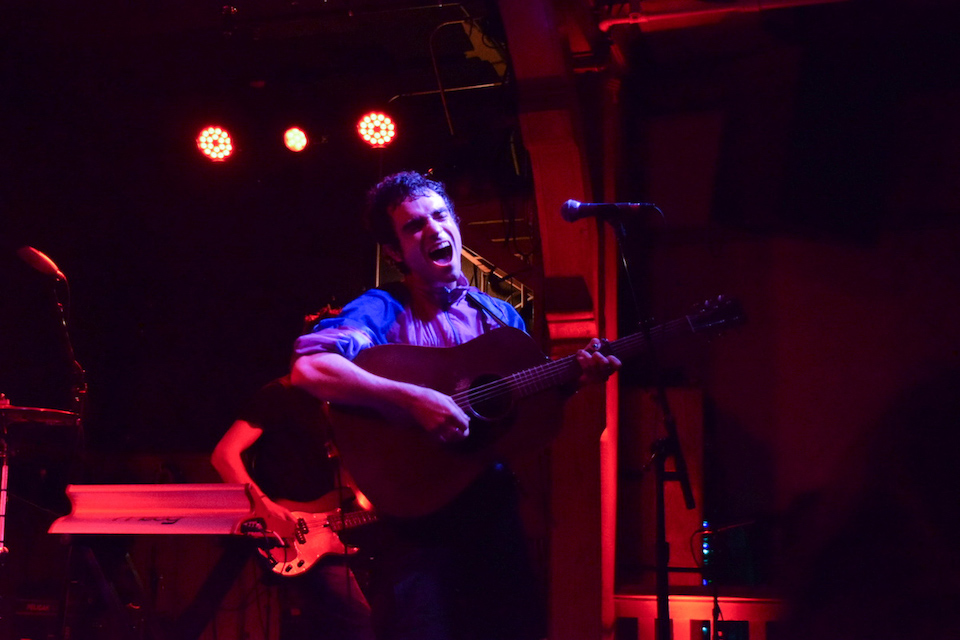 Holden Jaffe – known by his band-turned-solo-project stage name Del Water Gap – says he feels as though he were playing his “first Del Water Gap show” Saturday night at the sold-out Schubas, his first live performance in nearly two years.

This is my first foray into in-person concerts since the start of the pandemic, and there isn’t a much better place to jump back in than Schubas, a venue that reminds me of everything great about live music. The space is simple and intimate – the only entrance and exit available for performers resides on the dance floor just left of the stage, letting those in a fortunate position to see the performers up close. I can tell you firsthand that Del Water Gap arrived at Schubas with a thin sheen of sweat already worked up and left absolutely soaked.

Del Water Gap (former roommate with Maggie Rogers) dashes on stage sporting a blue windbreaker and mirrored sports sunglasses, and without a moment’s hesitation jumps into “Sorry I Am,” a fan favorite that combines lyrics of lost love with a vibrant, unreserved sound. The song is featured along with a number of familiar hits – like “Ode to a Conversation Stuck in Your Throat” – in his debut album, Del Water Gap, released less than 48 hours before this performance. The 28-year-old’s energy is infectious, as though he’s been liberated for the first time, and with the novelty of his debut album and his return to live performance there is a sort of ecstasy on stage that the audience can’t help but reciprocate.

He gives the audience a moment after “Sorry I Am” to collect themselves. “Did you guys like my glasses?” he asks with a grin after tossing them aside, and amongst screams of approval the band kicks off their next song, certified hit “Perfume.” This song also features in his debut record, but the studio version misses out on the incredible talent of the band itself: Eric Macias on bass, Ross Hodgkinson behind the drums and Nick Cianci on guitar. The chorus is punctuated by an incredible guitar solo, as Cianci lets loose on the electric guitar and Jaffe holds down the core of the song on his acoustic. Schubas is alive.

The rest of the set after “Perfume” mostly hails from Jaffe’s titular album; it’s the first time that many of these songs have ever been played in front of a live audience. Jaffe’s personality is impossible to miss in these songs, and it’s no wonder – they are written, produced and sung by him and rarely anyone else. Listening to these for the first time feels like watching a personal confession unfold onstage. Jaffe switches continuously between electric and acoustic guitar, but each song holds on to that quintessential Del Water Gap sound: part house music, part punk rock, part indie pop. The only exception to this is Jaffe’s personal favorite from the record: “It’s Not Fair!” Like all of Del Water Gap’s music, his artistry is strikingly clear and personal through the intimacy of the lyrics and the gentle melody, but this is the only time during the show that Jaffe plays without the rest of the band, returning to the acoustic guitar and resting on his own purity of voice to move the crowd. I journeyed to my Spotify and added “It’s Not Fair!” to my sing-along playlist before the first chorus had even finished, and have had it on repeat since then.

Del Water Gap and the band take their leave after the triumphant song, “Uh-huh,”  but the crowd can’t let them go without hearing “Ode to a Conversation Stuck in Your Throat,” which brought Del Water Gap into the public eye during the height of the pandemic. The band dashes back onstage for their encore and seems to make an effort to expel every last ounce of energy they have. Jaffe jumps up onto his amp, Cianci spins and rolls while navigating up and down the guitar’s fretboard. Their final departure feels conclusive and very deserved.

Other highlights from his debut album (but be sure to check it out for yourself) include “Bug Bites” and “Better Than I Know Myself.” Another one of Jaffe’s most well-known songs, “High Tops,” came about halfway through the show and, unsurprisingly, had all of Schubas singing along by its end.

Del Water Gap performed on Oct. 11 in Columbus, Ohio, and will be traveling cross-country while completing his three-month tour, landing in Los Angeles and San Francisco by December. Keep him on your radar.