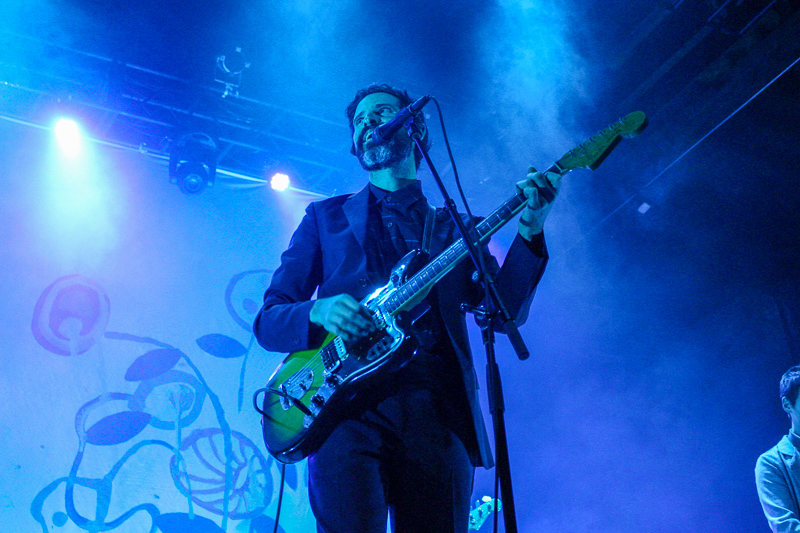 Thalia Hall was not quite prepared for the musical masterpieces it hosted on a cold Sunday evening in November. With Black Belt Eagle Scout, otherwise known as Katherine Paul or “KP,” a Swinomish/Iñupiaq singer-songwriter and multi-instrumentalist from Portland, Oregon opening for the beloved American-Venezuelan singer-songwriter Devendra Banhart, the night was an honoring and celebration of distinct, loud, and proud voices.

Black Belt took the stage with a precise and heartfelt intentionality. They began by offering a land acknowledgement, a practice most of the audience (including myself) had not experienced before at a concert. As warm drum sounds trailed into the opening song, they, with a soft and clear voice, welcomed all Native and other folks of color to congregate at the front. This intention paved the way for a meaningful and vulnerable seven-song set, captivating the audience with tunes that told of their mother, of childhood, and of growing into their Native queerness.

A particular song that struck me was the fluid “Going to the Beach With Haley” (At the Party With My Brown Friends, 2019), a simple and honest tribute to their childhood best friend. Sounds of ocean waves soaked in the background as their calm, low voice matched a steady and slow tempo, rocking back and forth between guitar and drums like the waves themselves.

Finishing with a song dedicated to those who may have experienced heartbreak as an ‘indigequeer’ and/or ‘two-spirit’ person, I almost forgot they were the opener; I, like many of the glowing faces around me, was entranced by the space of intention, vulnerability, and mastery they created for us as listeners.

With a brief in-between, the crowd desperately awaited Devendra’s arrival. I was not sure what to expect, but surely I did not anticipate his sudden appearance sitting at the center of a dark stage murmuring “Is this nice? Do you like it?” —lyrics to the first song on his latest album Ma (2019).

The song’s sweet and meticulous beginning was a perfect way to light up the stage, illuminating Ma’s album cover as the backdrop, and the band members — consisting of a drummer, bassist, keyboardist, and two guitarists, and of course, Banhart himself. With a couple playful swivels in his chair, Banhart jumped up, ready to entertain the crowd with his charm and talent for another 18 songs.

Sporting a sharp blue suit and a pair of trousers, which he playfully pulled up throughout the set, he kept the crowd on their toes. Yet, Banhart’s brilliance both as a lyricist and performer was conveyed through his visible versatility and eccentricity. Whereas sometimes his hilarious gestures and dance moves arose a loud laugh from the crowd, other moments of subdued stillness, paired with sincere and sometimes sad lyrics, brought me to tears.

He led with a couple others from the new album, such as “Kantori Ongaku,” which resembles a slight 70s groove, and “Taking a Page,” composed of more alt-sounds through which he gestured just about every quirky lyric. The high energy continued with some crowd favorites, namely “Santa Maria de Feira” (Cripple Crow, 2005) and “Fancy Man” (Ape in Pink Marble, 2016).

Before transitioning into a heavier part of the set, Banhart asked for a silent pause, asking the crowd to enter a deep, respectful place in order to give Black Belt their most sincere acknowledgement for the musical heart they poured out on stage. The intentionality he put into thanking them was reminiscent of what Black Belt had set out to create at the start of the night, and the effort was received by numerous cheers and applause. It was a moment of collective respect.

Taking the stage solo with a slow rendition of “Quedate Luna” (Cripple Crow, 2005), the crowd listened with care as he strung out each soft sound, dragging notes to match the song’s title: Stay, Moon. I felt Banhart’s voice fading, and I wished for it to never end.

In between yet another mood transition the band’s drummer and keyboardist shared a riveting duet, featuring their individual talent. The shared performance allowed me to hear the backgrounded brilliance behind all of Banhart’s adored songs. “Fig in Leather” (Ape in Pink Marbles, 2016), “Never Seen Such Good Things” (Mala, 2013), and “Shabop Shalom” (Smokey Rolls Down Thunder Canyon, 2007) were three of my personal favorites to close the show.

Despite the lengthy set, I was not ready to say goodnight by the end, which fortunately included a killing encore of “Carmensita” (Smokey Rolls Down Thunder Canyon, 2007) that got the entire music hall grooving. Flowing from goofy to somber, Banhart’s harmonious blend of melodies and fantastic stage presence made for a truly delightful show.