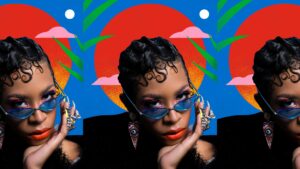 Mayfest Productions is thrilled to announce Rico Nasty as our headliner for Dillo Day 2020. In the last few years, Rico has experimented with many sides of her persona, releasing a string of mixtapes blending bubblegum and aggressive hip-hop into her own brand of sugar trap. On Rico’s 2018 tape Nasty, she took her sound to a new level with tracks like “Countin’ Up” and “Rage” — powerful statements that established Rico as a force to be reckoned with and demanded the attention of the music industry at large.

Following the release of her mixtape, Rico continued to build on her success joining 2019’s XXL freshman class, nailing a feature on Doja Cat’s “Tia Tamera” and releasing her next album Anger Management with Kenny Beats. Anger Management is a shot of adrenaline to the heart — the record sees Rico in heated battle with Kenny’s percussive production without allowing the listener any time to breathe over its compact 19-minute run. The album was met with widespread critical acclaim and introduced Rico to an even larger audience.

Rico’s music explores the primal, animalistic energy that each of us keeps at bay, and in a time where we feel trapped by an evil that looms larger than life, Rico provides a cathartic outlet for every time we wake up wanting to punch a hole in a wall. Dillo is a campus-wide community event where for just a day, we all tear ourselves away from work and take time to experience music with one another; community is something we cannot lose sight of. With Rico Nasty’s set, we hope our community can let go of some of our deep-seeded frustrations and heal together.