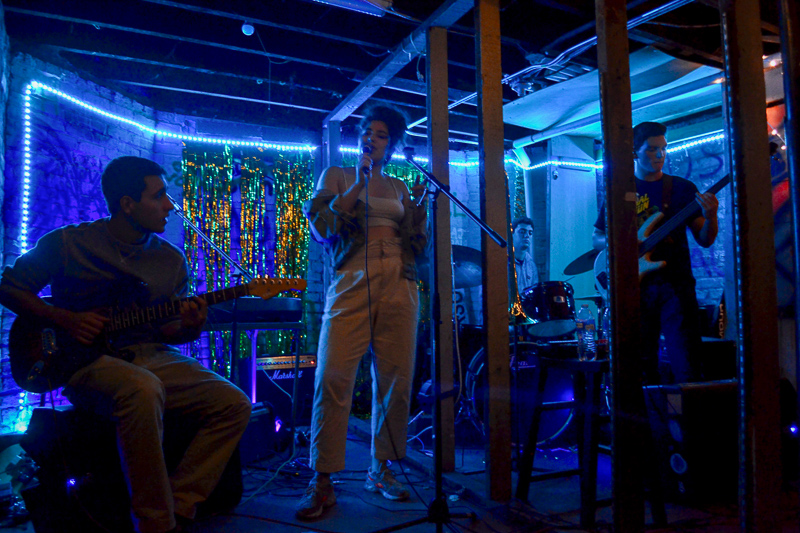 The graffitied walls of the narrow basement I ventured into Friday night greeted me with an arrangement of gold and silver streamers whose plastic sheen glimmered under the color-changing neon string lights secured above them.

Aside from a blood red drum kit, several amps and a smoke machine, the corner of the room was populated by the stars of the evening – a collective of students ranging from freshmen to seniors – and their respective bands, including Wes Park and the Blueberry Booboo Boys as well as Debbie Marie Brown & Co., eagerly rehearsing for the show to start in twenty minutes.

While saxophone riffs and quick drum licks randomly ricocheted off the walls, I approached and, fortunately, had the chance to speak with one of the night’s acts, singer-songwriter Alex Banin and her accompanist Tony Leonardi.

“I’m excited to perform in front of my friends tonight… to show everyone my music,” Banin said. “I want to get more comfortable with learning my stuff and having fun with it. It’s just super fun.”

Banin, accompanied by Leonardi on guitar as well as a percussionist and a bassist, managed to “get together ten minutes before the show,” performed two of her original songs with fluency and passion, her narrative lyrics and flowing melodies reaching out into the audience and pulling back with suspenseful emotion.

In the next room over, five of the seven members of student band Morning Dew, a self-described R&B, rap, jazz and fusion group sat together, instruments in hand.

When asked what the band was most excited for, saxophonist Albert Kuo, a sophomore who’s obviously thinking ahead, told me he’s looking forward to this upcoming year. “I think we’ve been rehearsing a lot and I feel like we’re ready to take on new gigs and keep performing all over,” Kuo said.

Darsan Swaroop Bellie, percussionist and second-year, emphasized the band’s desire to seek out and discover its signature sound. Freshman Eddie Maday added to the thought: “I would say we’re… in the process of having the ‘what are we?’ talk,” Maday said. “We don’t want to be like a cabaret-night band. We want to be a band that has its own established sound.”

The group took the stage with a selection of original songs; charismatic sax entranced ornamented spunky vocals, all held together by a foundation of crisp lines of percussion. I glanced up from my camera for a few short seconds only to see vocalist Joe Nedder casually replacing the microphone in his hand with a trombone mid-song and, of course, coming back in effortlessly, quite aptly encapsulating the overwhelming spirit and level of sheer talent the group had to showcase. Morning Dew indeed came through with an eclectic presentation of original songs and old classics in a display of what can easily be considered the standard of creative musicianship.

Bienen or not, Northwestern’s student music scene and its individual components – from the impromptu duos to the seven-member ensembles and everything in between – showcases the creative bug so characteristic of Northwestern students across majors. As anyone who’s had the pleasure of sitting in on one of these shows should, I look forward to seeing (and hearing) what these artists’ futures have in store.