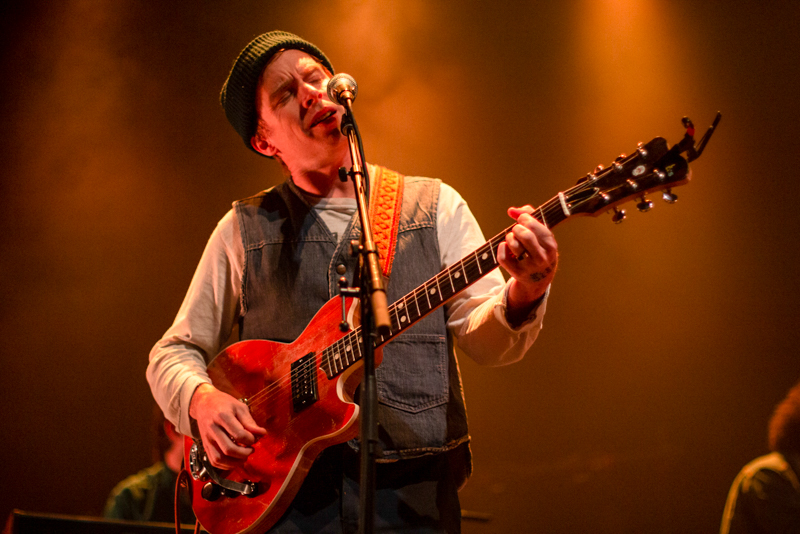 After spending a few too many minutes outside in line admiring another one of Chicago’s classic surprise snowstorms, I was more than ready to make my way into Thalia Hall just in time to catch the last few songs from the night’s opener, Michael Nau. Nau, an indie/folk rock influenced singer songwriter, who I’d only just listened to on the ride to the concert, makes songs that can best be described as dreamy. He and his band seemed more like they were at a practice session than opening for a packed venue, not showing much energy or even movement on stage, but they sure sounded great. Nau’s voice has a deep, dreamy tone that feels straight from the 50’s, though also fitting perfectly on top of psychedelic guitar chords, and funky bass lines with a keyboard backing. I mentally tagged them as one of my many ‘should probably listen to later’ artists, and got ready for the main event.

Dr. Dog is a Philadelphia based low-fi indie rock band with both psychedelic and folk tones mixed in to their sound. Co-Leadmen Scott McMicken and Toby Leaman have been playing and writing their own songs ever since they were in eighth grade together with a steadily growing fanbase and now impressive discography to show for it.

On stage, they’re accompanied by two percussionists (one traditional drummer and another playing their custom instrument: the meatball palace), a bass player, and a keyboard/organist that come together to create an incredibly rich and full sounding performance. From the opening lines of “The Rabbit, the Bat, & the Reindeer,” a fun piano led tune about abandoning a decaying friendship, I knew I was in for a treat.

Despite a great onstage energy, the band has faced a fairly constant criticism since their very first releases for being too safe, not straying enough from their musical influences, and not evolving their sound over time, a criticism that I have to agree with after listening through most of their projects. Not that they’ve sold out or sacrificed originality for popularity, just that after a while it really does all start to sound the same with major chords dominating their uptempo sing along style choruses and eerie sounds and lyrics mixed into their offbeat love songs. Though, on their latest album, Critical Equation, they’re seeking to change that narrative. McMicken told NPR that the guiding narrative for the album was “F*** Dr. Dog” in an attempt to get themselves out of creative ruts that they’ve been digging themselves into over the past ten years; and in short, they definitely succeeded.

Despite any amount of criticism, there’s no denying that the crowd loved every song of the evening whether it was new or old. Even though the band never even stopped playing to address the crowd or even introduce themselves, the show felt personal. People around me knew at least the chorus of most songs and enthusiastically sang along. The performance was a masterclass in live dynamics, effortlessly switching from booming choruses to whispered outros with each of the members playing off each other’s energy through the night. When the group came back out for their encore, instead of playing a set grouping of songs they saved for the end, they just took audience requests.

Even though the band has faced criticism for refusing to move too far outside of their comfort zone musically, by staying there they’ve definitely mastered the art of the live show, and I would highly encourage anyone to try to see them.