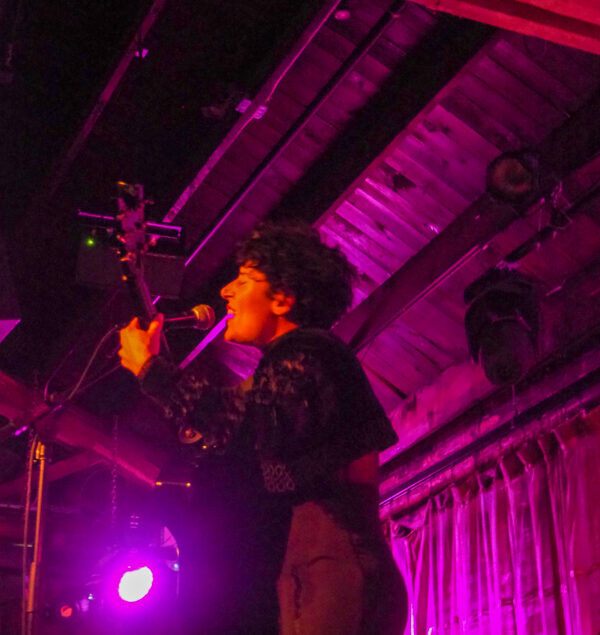 The sign of a great concert is when the person you’re with says they didn’t like the artist beforehand, but texts you a day after and tells you that they’ve been listening to their entire discography after the fact. That’s what happened to my friend after we went to see Emily King at SPACE in Evanston. We walked away from the show and all we could say was “Wow,” and “How?” Personally, I’ve never been as interested in acoustic shows; I love to watch the way a full band interacts and plays off of one another, but this acoustic show may have changed my mind.

Emily King walked through the small back room venue that SPACE is and got on stage. It was just her and her background guitarist/vocalist. The lights were pink and the audience was waiting in respectful anticipation; seeing as the crowd was a mix of middle-aged Evanston residents and millennials, my friend and I were some of the youngest people in the venue at the ages of 20 and 21. Almost immediately after getting on stage, King asked to dim the lights because she was nervous. Something about an artist saying they’re nervous makes me like them more. Someone with extraordinary talent humanizing themselves? It’s approachable.

King started the night like she started her most recent album Sides — with the song “Radio.” At first, it seemed like the song was a slow ballad, and I was worried about what I had gotten myself into. Then came a break in the song, silence, and the background guitar flew in with a stronger, more punchy chord progression. King began to dance and the respectful crowd lost it.

“Sing it!” “You got it girl!” and “Yes!” were echoed from the crowd. She was relishing in it, smiling, dancing, and hitting every inconceivable note perfectly.

This show was focused on King’s recent acoustic album Sides, which includes acoustic versions of songs from the three previous albums she has released. Although the show was based on an acoustic album, it didn’t feel acoustic. If there’s one lesson I learned from this concert, it is to never underestimate a classically-trained guitar player. Both King and her background guitarist/vocalist were playing perfectly with one another. They brought percussion without needing a drummer, and bass without needing a bassist. In addition to the guitars, King’s vocals were strong enough to further surpass the boundary that separates dry, acoustic shows from upbeat, produced shows. She added vocal flair that kept the audience on their toes, as well as brought an abundance of energy to stage. She told stories that made audience members feel like a friend of hers with starts like, “I’m gonna keep complaining while the night is young,” and “The biggest lesson in life from me is how to sit in a stool,” to discussing strategies for trying to smuggle CBD oil over the U.S-Canada border and ragging on the dry skin you get under your nose from a cold. And then she danced. She crouched over, turned in circles, stuck her arms out, and salsa-ed. No movement she made looked perfect or choreographed, but everything was perfectly in rhythm to what she was singing.

The entire show was fun, but the most fun King had on stage was when she was singing “BYIMM.” “BYIMM” stands for By You I Mean Me: a sassy R&B pop mix with soul undertones explaining all of the things that King did for her significant other in her past relationship. Except, she frames the song as if her significant other had done those things for her, and follows it with “By you I mean me.” When she was performing, she took the beginning of the song especially slow — making sure the audience could feel all of the things that were done — then she turned around so her back was to everyone, looked back at us, slapped her butt, and exclaimed, “By you I mean me!” This made everyone in the room cheer and laugh, and as the tempo increased she sang her heart out in a falsetto that I would have never thought possible.

There’s something special about an acoustic show that I had overlooked until seeing Emily King perform, and that is the vulnerability that becomes accessible to the audience. By performing these songs acoustically, you could hear the strain and softness in King’s voice. She had nothing to hide behind. This increased vulnerability made the songs already about love, loss, and opening oneself up take on a much deeper meaning.

To conclude the night, King decided to make a cliche concert move and cut the guitars and get the audience to sing background parts of her song “Sleepwalker.” In an unexpected turn of events, the audience did it — and sounded good. I was bewildered and amazed by how she could divide people into different vocal cues, get them to sing at the right time, and still be singing herself. For days after seeing Emily King I didn’t understand how King perfectly mixed vocal talent, a great performance, comedy, and vulnerability all together into one. People performing acoustic shows should take note of Emily King’s style; she is paving a new path.