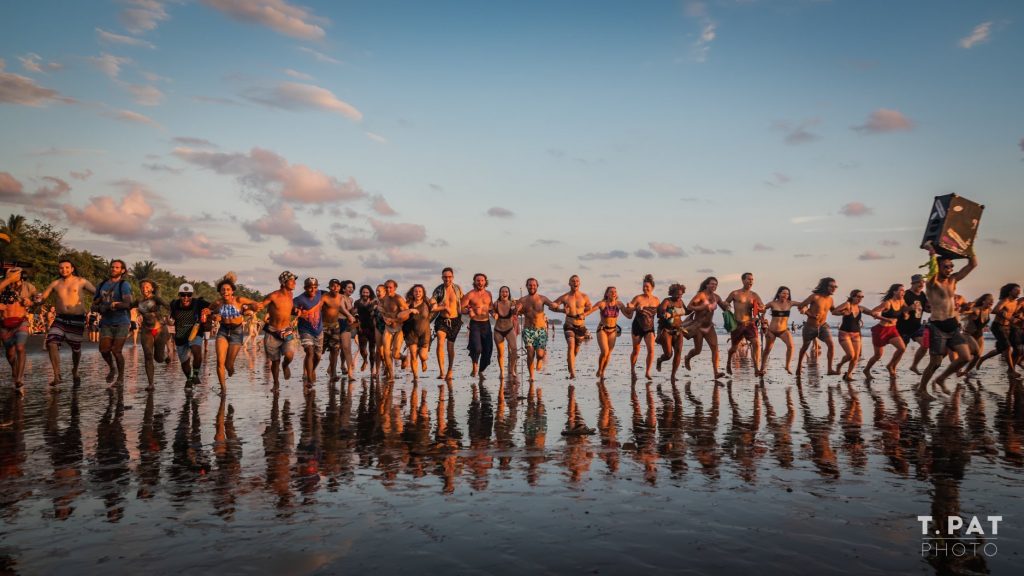 Every year, about 5,000 people gather in the depths of Costa Rica’s jungles for a four-day
“celebration of human potential.” Smells of palo santo (Latin American sandalwood), sage and
cacao permeate the air from spirit cleansing rituals and Amazonic cacao ceremonies.

The deep howls of wild monkeys merge with the sound of the swishes of a handmade machete
embellished with labradorite crystals, cutting some of the freshest and most colorful papayas,
mangos, and coconuts found on Earth. Bare feet leave only the footprints of playful running and
restless dancing. Salty hair let loose to flirt with the wind and flow, as one.

“Leave no trace” is a common phrase written around the festival. An alternative to today’s society; a place where single-use plastic is banned, but long hugs, and the free expression of raw emotion, a return to the exploration of primitive human essence of the soul without boundaries, is allowed, and in fact, encouraged.

Envision Festival, held in Uvita, the country’s pacific coastal beach, hosts individuals from all over the world with the purpose of creating a space to share art, music, spirituality, movement practices, regenerative strategies, and a deep connection to nature. The festival is founded upon eight pillars: permaculture, spirituality, movement, art, music, community, health, and eco-building, all of which are explored in different ways through the spaces, activities, and workshops offered at the grounds.

I first heard about Envision my freshman year of high school, when three seniors attended and came back to launch what became one of the largest student-led eco-initiatives in the country. Upon the program’s success, they delivered a speech that claimed Envision had changed their lives forever and inspired them to build the program. I remember witnessing a change within them, something had sparked — it was if they had experienced an awakening of sorts, but I couldn’t put my finger on what it was exactly.

My feelings of amusement only grew stronger as the years passed, when around the time of the festival, my social media was bombarded with testimonies that claimed how inspiring and life-
changing the festival was, and everyone I met that had attended the festival or worked there seemed to speak in verse. They had an otherworldly energy of bliss, yet a sharp awareness of the
environment, global issues, and activism, which they all attributed to the festival.

Unsurprisingly, I then learned that Envision promotes itself to be a “transformational” festival, so
when I got the opportunity to attend the festival’s ninth edition, which ran from February 28 to
March 3, I made it my mission to uncover what it is that makes the festival earn its place in the
realm of transformational experiences, to uncap how, in the span of only four days, individuals can become so deeply touched and experience such measures of personal growth and liberation.

Prior to the festival, I interviewed two experienced festival goers in an attempt to get an idea of the theme I was exploring. Madeline “Gypsy” Denton, a 23-year-old chocolatier from San Jose, Costa Rica, who has attended the festival four times as a camper and a volunteer, described how the festival inspired her to become a more free-spirited individual, how it served as a guide to living a more wholesome life, and how it allowed her to form life-long bonds.

“I felt like I was a butterfly coming out of my cocoon and spreading my wings,” Denton said.
“Without complicating it, this festival basically breaks all the stigmas we have in day-to-day society of how to be, how to dress, how to think, how to share, how to dance, how to sing, how to paint, how to live.” She said her organic chocolate business was a way to honor the lessons learned at Envision. “Till this day Envision continues to touch my very core. In essence, it has made me who I am today,” she added.

Similarly, Julian Ortiz, a 19-year-old Belgian and three-time volunteer, first attended Envision after observing the transformational effects it had on his sister after she went for her first time. “She came back so so happy,” Ortiz recalled. “I noticed a glow in her that I hadn’t seen before. I truly saw the impact the festival had on my sister and I wanted to be a part of that too, so I went and my life changed.”

Julian believes that merely witnessing the human potential to live in harmony is a transformational experience. “It is possible to live in harmony,” he says, “and witnessing that, no matter who you are, where you are from, what your personal experience at the festival is–just seeing people from all over the world living and sharing despite differences. It is sure going to transform you.”

I returned from Envision with a heart bursting with gratitude upon receiving countless gifts. I wore a Caribbean hair wrap on my head, gifted to me by a woman I collaborated with for hours to build shade for our tents, a complex art print gifted to me by an artist because he believed it “resembled my energy,” crystals, handmade jewelry, and homemade food treats given to me as a token of gratitude for deep conversations. I was able to experience an overwhelming amount of raw human connection through interactions, art, and music.

The greatest gift I could have received, though, was the answer to my question, “What about
Envision is so transformational?” I walked out of Envision on that Monday at sunrise, ladened
within the countless pages of kombucha-scented notes inside my sandy backpack, full of interviews and stories of people who so willingly shared. And there it is— the essence of Envision, of sharing and harmony, with others and the environment, and radical acceptance.

What allows Envision to impact many to such depths is the way it is set up. Through the spaces and the opportunities provided, it allows a safe arena for individuals to live in an alternative way–coexisting with one another and surrounded with love and respect. Encapsulating boundaries of
emotional and artistic restriction do not exist, and people witness that living in a space of such
extent can be successful; it allows for the adoption of new mentalities, and thus, merely witnessing the nuances of interaction becomes a transformational experience.

The Spaces of Envision

“The Village is a life-changing space,” said Grace Everden, a 27-year-old festival attendee from Colombus, Ohio. “I love how I can just cruise through this majestic forest area and find individuals sharing their art or practicing yoga, or meditating. I can sit anywhere and feel invited, walk up to anyone and have some of the most amazing conversations. I have completely re-evaluated my lifestyle in terms of diet: after learning about the ethics of how food is sourced, seeing that it is both energizing and delicious to eat vegan, and implementing what I have learned about herbalism and plant medicine.”

In The Village, Envision’s main grounds, participants can find multiple areas to engage in activities promoting health and wellbeing such as The Witches Healing Sanctuary. The space holds sound/energy healing rituals and hands-on therapies, as well as a herbal clinic as an alternative to western medicine. There is a non-alcoholic herbal elixir cocktail bar, which Sarah Wu, Envision co-producer and village witch, describes as a place to “allow your mind/body to reach its fullest potential and state of happiness without trashing it” and an educational series on alternative healing methods fused with environmentalism and pagan spirituality.

The Village is also comprised of The Eco Village Hub, a programming area to connect with
thriving eco-villages; The Temple, a sacred space dedicated to spiritual circles; The Children Oasis, a designated area for children and families to engage in play and education workshops, a market offering the work of artists and artisans, and a healthy food market with organic food vendors featuring cuisines from all over the world.

The Music Stages and Art Gallery

“I have attended music festivals all over the world,” said Jeremy LeDaum, 33, from Quebec,
Canada, “and never have I experienced what is found at these magnificent stages. The lineup is
incredible. It is inspiring to see so many alternative artists experimenting with sound, performing in these amazing recycled stages built with such intricate detail. The energy of the crowd is euphoric- people dance their heart outs- share, laugh.”

An eclectic lineup of alternative electronic and tribal music brings life to the three main stages at
Envision (Luna, Lapa, and Sol stage). This year the fest brought back some international and
national favorites, like Clozee, Trevor Hall, Santos y Zurdo and The Floozies. New additions like
Griz, Tycho and Random Rab marked their prominence in the explorative electronic music scene,
combining sounds from all over the world.

“I am fascinated by the amazing visionaries who came out to open, heal, and awaken their hearts in my class in this amazing space,” said Amber Lee Sears, a yoga teacher, “It is transformational to see how many people have the courage to let go, play full out, and celebrate life at the highest level.”

“The most impactful space for me was the red temple. All my life I had been told that I can’t even say the word vagina, that talking about sexual pleasure isn’t ladylike,” said Carmen Guerra, 34, from Mexico City. “All of a sudden, I am in a safe space where I can talk about women’s issues and sexuality in a free way, honor and celebrate my femininity and my sexual pleasure amongst other women.” The red tent is a space designed to bring women together for workshops and dialogue circles about women’s issues, embracing sexuality and womb care.

“Seeing people be so appreciative of nature, dancing in the waves and clapping at the sunset in a
jaw-dropping beach was transformational.” — Kurtis Imnul, 25, Istanbul

Uvita beach is a place where festival goers can interact with the local community, participate in sunset drum circles, and take a dip in the ocean to be fully immersed in nature.

As the tribal sounds of Nicola Cruz’ closing sunrise set fade into the distance, tents get packed up,
and loving hugs seal lifelong friendships, the festival comes to an end this year. But like the deep
roots of the grandfather trees in Costa Rica’s jungles, Envision’s transformational effects linger,
entrenched within the souls of the attendees.