“There’s been a few times I’ve had to stand outside bars until it’s our turn to play,” 20-year-old Johnny Cummings said. The singer-guitarist was clutching a Pabst Blue Ribbon.

Sitting on the living room sofa in their Logan Square apartment, Ex Okays — made up of Cummings, singer-guitarist Aidan Cahill, bassist Donovan Thomas, multi-instrumentalist Elias Snyder and drummer Dominic Folino — spoke about being high school misfits, living on their own and rising in the Chicago DIY music scene.

Cummings books all of Ex Okays’ shows himself, despite not being allowed to wait inside certain venues because of his age. To avoid this obstacle, the young rock band has been playing house shows around the country, touring via the band’s trailer and Folino’s own Jeep Renegade.

Evidently, the road to indie stardom entails performing in dingy college basements, record stores and pay-to-play venues. The band got their start by perusing Facebook and offering to play every house show they could. Eventually, Ex Okays garnered enough name recognition to be approached by people hosting shows.

“You just gotta get some momentum, and once you know more people, go to more shows, play more shows and make more friends, your name gets out there,” Cummings says. “It’s a snowball effect.”

The band came together when Cummings, Cahill and Thomas met freshman year of high school and spent their afternoons “fucking around” in Cummings’ basement. In search of a drummer, they enlisted Folino — who, at the time, was in another band — and started playing shows. They soon invited Snyder, who was homebound due to a torn meniscus, to bring his keyboard and jam with them. Insisting that the band’s name means nothing, Ex Okays were born. 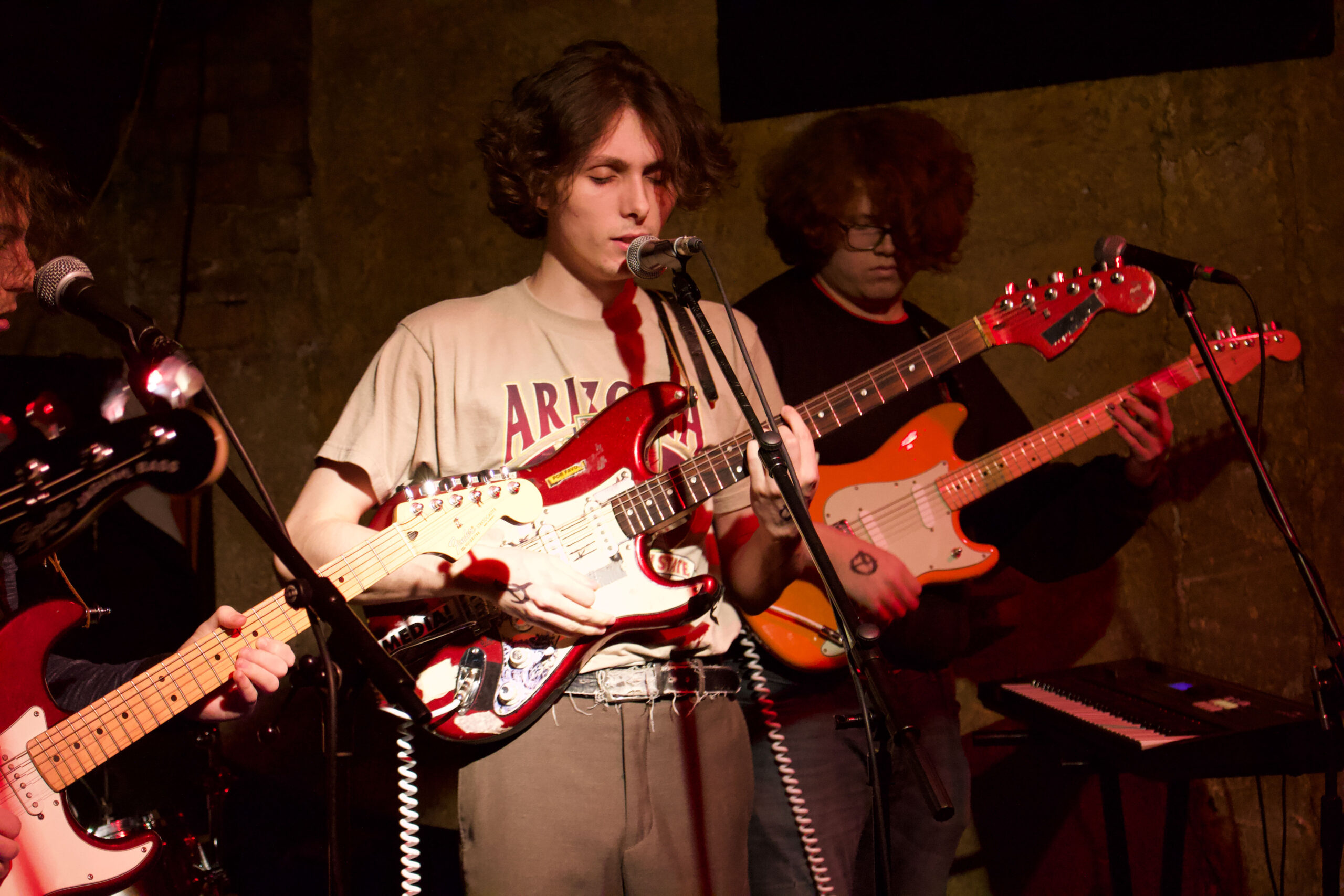 Playing music was Ex Okays’ way of filling the void of their “culturally deprived” Catholic high school on the South Side of Chicago. The band loathed the school, and in typical punk fashion, Thomas even got suspended for growing his hair too long.

They’ve been releasing music since 2014 but hid some of their early stuff on Bandcamp’s “private” mode to spare themselves some embarrassment. Until recently, their method of recording was practically home demoing.

“There was no intelligence at all,” Cahill says. “We didn’t really care too much and knew nothing about mixing. We still don’t.”

In 2019, the band recruited Post Animal bassist Dalton Allison to mix their songs, resulting in a crisper sound on their EP Good/Old Days. They also started renting a rehearsal studio from Treehouse Records, where most of their ideas are developed and polished. While some songs, like “Goonies,” are conceived collaboratively, generally, the band’s songwriting process is rather individualistic. Usually, one member brings a nearly completed song to the rest of the group for fine-tuning. Whoever starts writing lyrics is typically the one to finish them, Snyder says.

Ex Okays have been on hiatus for the past few months, the quarantine forcing the band members to “scatter all over the Chicagoland area.” They were set to headline a show at Sleeping Village April 8, about a month after Cummings’ 21st birthday, but the event was postponed and then canceled due to COVID-19.

For now, Ex Okays are tabling the idea of making an album in favor of “shooting” out singles and EPs, as the band is influenced by pop and rap artists who saturate the market with frequent, short releases.

“In a perfect world, an album would come with a record deal,” Snyder says.

It’s a distant dream of theirs, but a record deal would provide Ex Okays with the funding and press necessary for a successful debut album. Considering the band’s traction and drive, that “perfect” world doesn’t seem so far away.