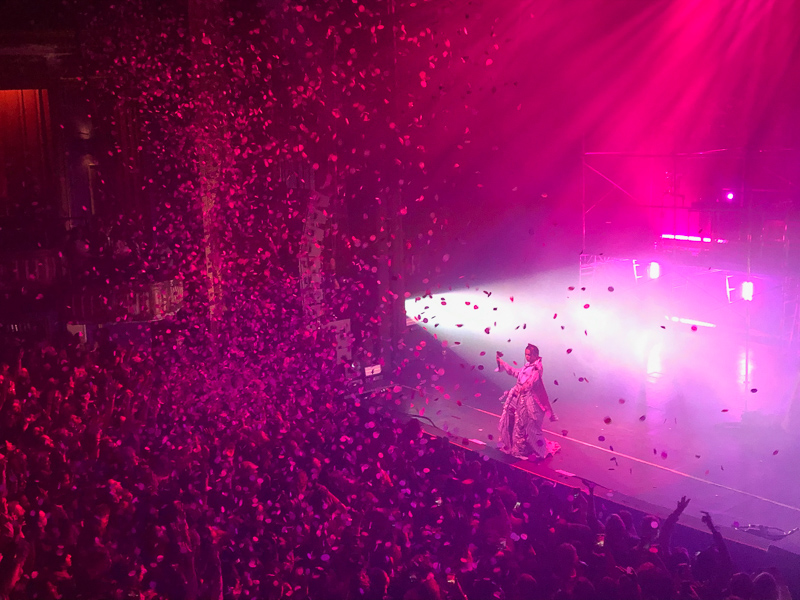 On a sold out night at the Riviera, FKA Twigs took everyone on the magical journey of MAGDALENE. After waiting well past the time she was predicted to start, haunting, melodic instrumental music preceded her entrance, followed by sweet, alluring singing. Paired with the blue lights shining on the crowd, the music sounded like a siren’s call. Anticipation pervaded through the crowd.

“A woman’s work/ A woman’s prerogative/ A woman’s time to embrace/ She must put herself first./

A woman’s touch/ A sacred geometry/ I know where you start, where you end/ How to please, how to curse.”

The opening lyrics to “mary magdalene” rang out and swiftly released the tension in the crowd. Clad in a renaissance-esque outfits and thin glasses, FKA appeared and began tap dancing.

After her impressive solo performance, she disappeared behind the heavy black curtain behind her. When it reopened, she emerged in a tall, feathered, white pirate hat and a white, loose renaissance shirt and began the pulsating “Water Me.” Twigs looked like a mythical water nymph during “Pendulum,” with light blue and white lights illuminating the stage; her every turn, wave and dip was as fluid and slow as if she was moving through water.

Suddenly, dancers emerged from the background. During “thousand eyes,” her dancers engaged in complex choreography with lots of jumps and twists as they transitioned into the next scene.

Next, Twigs stepped out in her elaborate “mary magdalene” outfit — an impressive red dress with a blue scarf. They performed “home with you,” and each of her dancers had different terrifying masks on. The masks starkly juxtaposed the sweet lull of the song, but paired nicely with the darker parts. At the end, her dancers lifted her limp body on their shoulders and carried her to the front of the stage.

And THEN, after “sad day,” THIS. BAD. ASS. WOMAN. PULLED OUT A SWORD. She was twirling it around and it was the most impressive, beautiful, amazing thing I have ever seen. In a perfectly timed moment, the curtain behind the other curtain dropped to reveal a band on these crazy metal structures. Once again, they used a song, this time “fallen alien,” to transition.

Reemerging in a bit more of a revealing version of her “mary magdalene” costume, the production continued to part 3. A red spotlight shone on her as a white one illuminated the cellist behind her during “daybed,” which sounded nostalgic and restorative. After this, she spoke for the first time. Her voice sounded soft and sweet like a little bird. She asked the crowd who was single, who had their heart broken, and after people shouted out, she responded “I’ve had my heart broken too.” Her following performance of “mirrored heart” made tears prick my eyes. She grabbed the mic and walked off the stage.

Returning in a beaded set, FKA showed us just how expansive her talents are. She began an intricate, elegant pole dance that displayed insane strength and discipline.

After blowing our minds, she changed into her final outfit — a large layered blue dress. In one night, she had turned into a sweet water nymph into a fierce warrior into a stunning empress. During “Two Weeks,” confetti drifted down from the ceiling as the curtain behind her closed. She performed cellophane in a dramatic, emotional climax, even though she was all alone on stage.

At the end of her long set, in true fashion of an epic performance, her and her dance mates all bowed and embraced as the curtain closed.

FKA Twigs is a master of words and emotion, knowing exactly how to manipulate a crowd into deeply feeling. Her ethereal aura reflects exactly the title of one of her songs: “fallen alien.” She’s got me convinced she’s not from this world. Her audiovisual technique of sharing her art has been perfected, and her show was an intoxicating sensory experience.

MAGDALENE is a masterpiece.