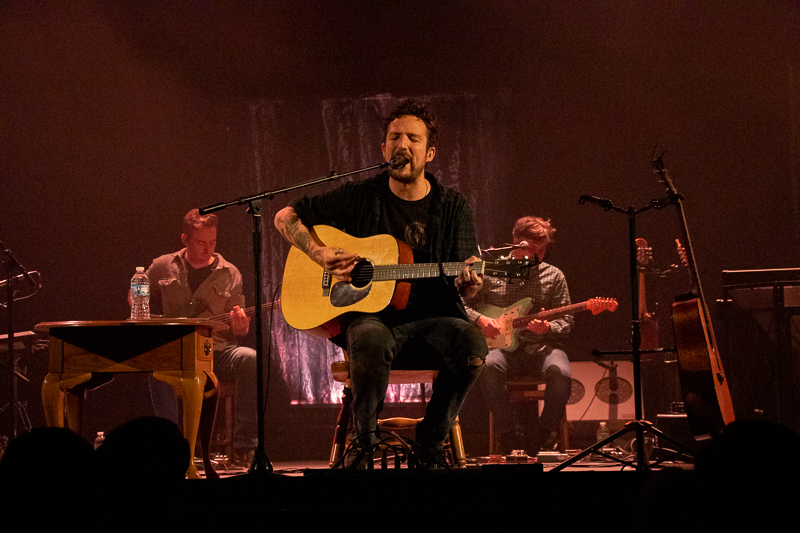 As someone who regularly frequents heavy metal shows with raging mosh pits, and enormous EDM concerts with blazing laser lights, when I walked into the sitting only Athenaeum Theatre, I certainly felt out of my element. Moms ushered their kids into the plush, red seats as ushers guided white-haired old men down the aisles. But this was still a punk show after all, and young adults sporting tattoos and battle jackets still made up a good third of the audience. Parents sipped their wine coolers right next to a few teenagers in leather. Unfortunately, hosting a punk show in a high-class theatre with no designated pit area meant as a photographer I had very limited shooting space as I crouched behind the seats and ducked underneath people’s heads. However, despite the somewhat stifling venue, Frank Turner & The Sleeping Souls still managed to put on a noteworthy, and still quite punk, performance.

The only opener of the evening walked onstage in a shamelessly mustard yellow jumpsuit and began to sing with a voice that moved the soul. Kayleigh Goldsworthy, a young folk singer with only one album to her name, hypnotized the crowd with her buttery smooth vocals, quirky humor, and melancholic lyrics. Her rendition of Dolly Parton’s “Jolene” was one of the best versions I’ve heard, but her own songs shone brightest with her soothing folk melodies that highlighted her finger-picking on the acoustic guitar. My favorite of her set, “Jamie,” Goldsworthy prefaced with a humorous epithet about writing the song drunk on a plane. Throughout the night, she joked about how she made yellow koozies that matched her jumpsuit, that she considered the audience her friends, and she encouraged them to go speak to her dad at the merch table. Even though the theatre was not small by any means, Goldsworthy’s relaxed set and easy charisma along with the intimacy of a seated audience watching a lone folk singer with her guitar created a deeply personal connection that I have yet to find at larger shows.

After a brief intermission, Frank Turner: Part One began. I say part one because for the first 45 minutes of the set, Turner played through the entirety of his newest album, No Man’s Land with only himself and his acoustic guitar. For part two, and the last half of the show, The Sleep Souls joined turner onstage for some older tunes. As Turner himself said that night, “the first half of this evening was stories about other people, and the second is stories about myself.” No Man’s Land includes songs about famous historical figures such as poet William Blake and the first female rock & roll artist, Sister Rosetta Tharpe.

Much like Goldsworthy’s set, the first half of Turner’s performance produced an intense and intimate dynamic between Turner and the audience. He sat on a wooden chair, holding his guitar with nothing else onstage except for a small wooden table to set his water bottle. With extremely minimal lighting that simply illuminated Turner’s form, and chairs of people placed directly in front of the stage, this solo act became not just a concert but rather a conversation between a musician and his fans.

Turner even encouraged audience members to engage with the music at certain points with calls and responses. The highlight of part one, in my opinion, was the British singer’s emotional rendition of his song “Rosemary Jane.” Before playing, he explained how he wrote the song for and about his mother, who went through many trials with his not-so-great father and with him and his sister. Unlike many of his earlier, more punk-rock songs, this soulful tune truly brought the “folk” in “folk punk.”

When Turner’s backing band, The Sleeping Souls, joined him onstage, the show finally took a more upbeat turn. While I enjoy much of Turner’s newer work, I have to admit that his first few albums will always be my favorites. Still, the sight of Turner and his four-piece band all sitting in wooden chairs while playing energetic punk music sat a little strangely both with me, and, from my perception, the audience as well. Many of the attendees bopped their heads slightly and sang the lyrics, but it’s quite hard to get excited when you and all the musicians are sitting down.

Regardless, Turner’s British humor in between songs, impeccable playing, and genuinely caring and empathetic disposition made for an entertaining and incredibly enjoyable experience.