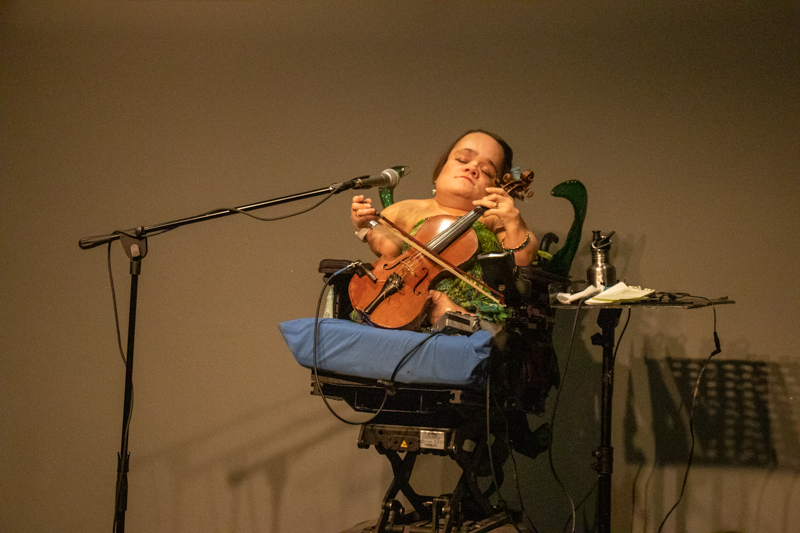 Sixty people filled every seat of the small concert venue in the back room of Seman Violins on the cold winter night of January 18th. The eager crowd waited expectantly and fell silent as Gaelynn Lea took the stage.

Gaelynn Lea, winner of NPR’s 2016 Tiny Desk Contest, is a singer, classically trained violinist, and a disability rights advocate hailing from Duluth, Minnesota. She utilizes a looping pedal to reimagine traditional Celtic tunes, and has written various original American folk songs. The raw emotion conveyed through her haunting, ethereal songs brought me to tears when I first heard her live performance on Tiny Desk. Enthralled by her musical talent and captivated by her heart-felt lyrics, I was naturally ecstatic to finally see her perform live.

What unfolded the night of January 18th was an intimate performance that I will never forget.  Gaelynn split her set into two parts of around one hour each, alternating between traditional Celtic tunes and originals, and interacted with the audience members during the intermission.  During the first hour, she demonstrated her looping pedal technique by looping melodies in various traditional Celtic fiddle tunes. She performed originals “Let It Go,” and “Someday We’ll Linger in the Sun,” my personal favorite of her discography, describing the song as confirming that love is beautiful, even when it’s complicated and challenging. She later performed her most recent song, “The Long Way Around,” which is about relationships that take work to maintain, but are worth it in the end. All around me, the audience members basked in the music and internalized the uplifting lyrics.

The second set continued the night’s themes of love and perseverance. She performed “Watch the World Unfold,” a song about self-love, and a rendition of “Amazing Grace,” which she dedicated to her late grandfather. During “Bird Song,” the audience participated eagerly in a sing-along and gave her a standing ovation at the end of “The Parting Glass,” an Irish fiddle tune she played as the encore. She closed out the night thanking Seman Violins for hosting her on her tour, and explained that they had installed a wheel-chair ramp for her to access the stage. She commended them for being an accessible venue and expressed a desire that more venues would do the same.

The impact that Gaelynn’s performance had on me and the rest of the audience was great. I left the warm venue feeling uplifted and hopeful for a future of more accessible art.