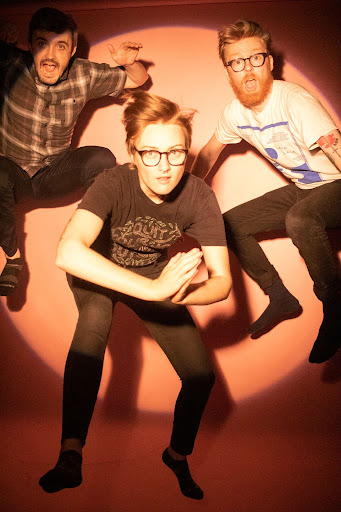 I had the opportunity to attend their house show in Logan Square, one of the few and cherished live music experiences I’ve been able to secure during a long year and a half of uncertainty and agoraphobia. My only previous exposure to Gosh Diggity was an unfinished music video for a yet-to-be-released song and a glowing review from my sister. In attendance were mostly friends of the band and parents of the lead guitarist, who adorably brought Gosh Diggity-themed vegan cookies for the crowd to enjoy during the performance. I honestly wasn’t sure what to expect.

Before the show, my friends had asked me to describe the band’s genre. I feel like that’s becoming an increasingly hard question to answer as more and more bands are weaving together many threads from different traditional styles. But I gave them a generic “indie pop” as an answer to shut them up. Nonetheless, I made it a point to ask the bassist, Cheryl, after the show how they’d describe the band, to which they immediately responded “kitchen techno.” Definitely a better description, but I’d add Gosh Diggity has pop punk, lo-fi, and indie rock running through their musical veins as well (which is totally up my alley).

I feel like it’s important to note that after this conversation, Cheryl proceeded to explain a math proof involving prime numbers (square a prime greater than five and subtract one and it’s always divisible by 24). The band’s advanced education — and charmingly nerdy tendencies — come through in more than just side conversations with the band members though, most notably in their lyricism.

The three person group — clad in mostly jeans, shorts, and t-shirts — took the stage, or rather, the corner, of a quaint Logan Square backyard to perform their first head-lining set since the pre-pandemic era. What ensued was an entrancing, albeit short, performance of six songs: one from each of their first two EPs, one elusive live-only song, and three from their upcoming album, Runaway Rocketboy (fun fact: the album’s name is a nod to the original title of Nickelodeon’s “Jimmy Neutron: Boy Genius”).

Their lyrics strike a chord without pandering to be relatable, a subtlety I’ve felt a lot of emerging artists can easily botch. It’s strikingly honest, touching on deep and difficult subjects while managing to stay lighthearted. Their first two EPs, Banana Brains and Bedtime for Bonzos, meander through topics involving relationships, loss, and self-doubt, but not without frequent references to “Drake and Josh,” “iCarly,” or samples from popular video games. There’s something special here — a sophistication when it comes to juxtaposing upbeat musical ambiance with thoughtful and introspective lyricism — that drew me, and certainly the rest of the crowd, into their world.

Their songs are approachable, but they do more than just scratch the surface. Their newest single “Wings” combines the strongest elements of their music: a catchy tune that talks anxiety and intrusive thoughts over an 8-bit robotic beat. Aptly, the song’s accompanying music video features an ill-fated love story in which the band is dressed in low-budget robot costumes.

The three-piece is early in its musical career, having signed with Rat Poison Recordings/Lauren Records as recently as September 1. I for one am excited to see what comes next.

They are releasing a new single on October 12, and their debut album, Runaway Rocketboy, comes out October 21 — I’m definitely setting a reminder.

Driving With Your Knees *